Election day is nearing, but there’s no end in sight to Trump’s attacks on science

From coronavirus to un-natural disasters, the entire playbook of the Trump administration is to "play it down" 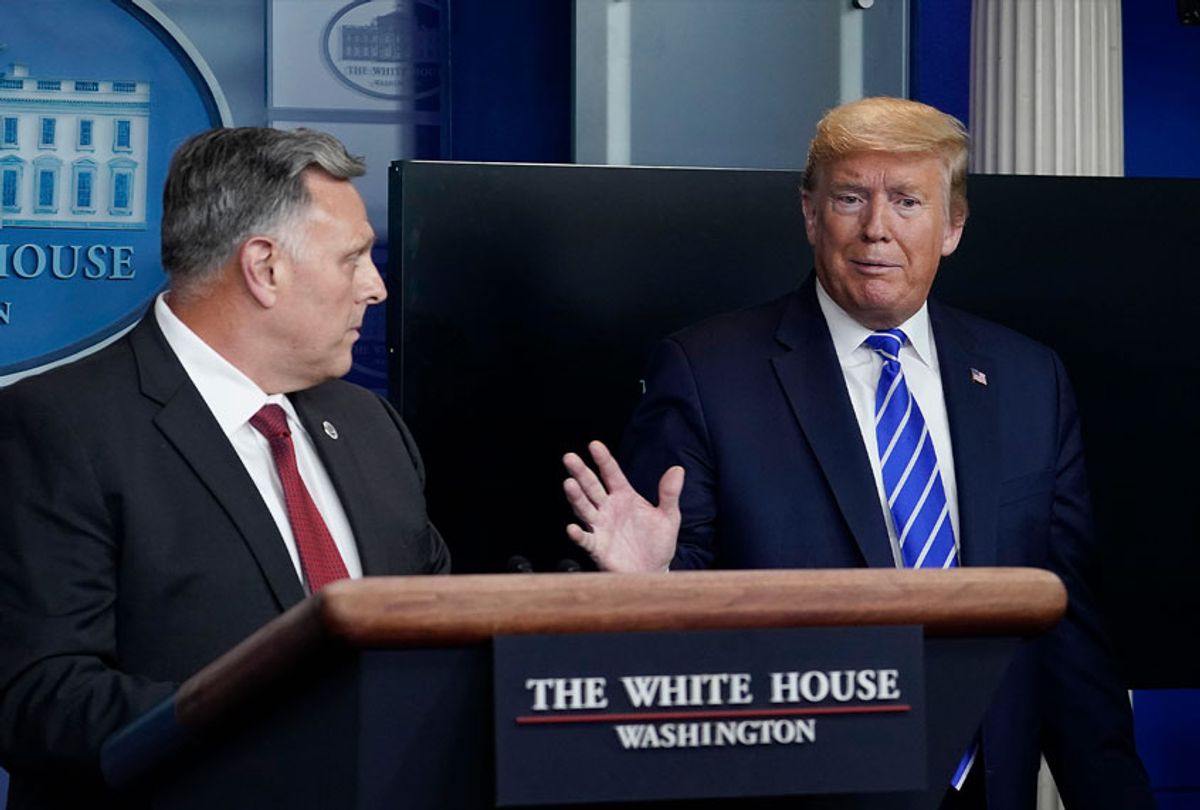 U.S. President Donald Trump speaks while William Bryan (L), head of science and technology at the Department of Homeland Security listens during the daily briefing of the coronavirus task force at the White House on April 23, 2020 in Washington, DC. (Drew Angerer/Getty Images)
--

President Trump appears to be on a tear to play down, put down, and take down science in the last weeks of his reelection campaign. After being caught on tape saying he purposely played down the true threat of COVID-19, he and his administration have put on encore performances with attacks on science across several cabinet agencies. All this while the nation is engulfed in a maelstrom of historic wildfires out West, record-setting Atlantic hurricanes, and of course the still-raging pandemic.

Last week, the nation listened to journalist Bob Woodward's recordings of Trumpfrom the winter in which the president had detailed how contagious the coronavirus is and revealed how early he knew the truth. Politico reported days later that politically-appointed communications officials in the Department of Health and Human Services, led by former Trump campaign operative Michael Caputo, have been manipulating and withholding coronavirus reports generated by the Centers for Disease Control and Prevention since April. Caputo, who has no experience in public health, medicine, or science, led a team that accused CDC scientists of trying to "hurt the president" by criticizing the administration's push to reopen schools. (Caputo took medical leave Wednesday after falsely ranting on social media that "deep state" government scientists are engaged in "sedition.")

National Public Radio then reported over the weekend that the White House quietly hired a leading climate denier, David Legates of the University of Delaware, as a deputy assistant secretary at the National Oceanographic and Atmospheric Administration. Legates has a long history of links to research that plays down the effects of climate change, some of it reportedly funded in part by long-standing climate-denying entities, like Koch Industries, the American Petroleum Institute, and ExxonMobil.

That hiring itself was an encore of sorts, coming a year after Trump lied about Hurricane Dorian threatening Alabama — and then bullied NOAA's Birmingham office to withdraw its forecast that the state was in the clear. The American public relies on NOAA for accurate short-term weather forecasts and long-term climate trends, not to act as a political arm of the president. The timing of the Legates hiring could not have been more ominous: Five major storms churned in the Atlantic, the latest noteworthy event in one of the most active storm years on record. (This time, one of them, Hurricane Sally, did hit Alabama, as well as Florida's panhandle Wednesday, dumping 25 inches of rain on coastal cities.)

Trump himself engaged in climate denial during his trip Monday to California, where he finally broke his silence on the historic wildfires that began burning down whole towns, scorching millions of acres of forest, and turning skies orange in cities in the West weeks ago. When he disembarked from Air Force One in Sacramento to head to a briefing on the fires, he gave an initial, unsolicited assessment of the wildfires: "We have to do a lot about forest management."

Asked by a reporter if climate change was also responsible, Trump did not say a word about the clear increase in hotter and drier days, months, and years, but focused solely on dried leaves and fallen trees that "explode." Woodland debris certainly does contribute to fires, but the scientific consensus is that it's not the only factor.

When the president was asked a second time if climate change plays a role in the unprecedented level of wildfires, he not only clung to forest management, he went on to once again "play down" the U.S.'s role in climate change. "We're just a small speck," he claimed, compared to China, India and Russia. Nevermind that with just 4 percent of the world's population, we have produced 25 percent of all greenhouse gases since colonial times. While China has indeed passed us as the leader in current emissions, we remain the top per-capita producer of gases.

Trump offered all this before his actual briefing on the fires. When he sat down with California officials, one exchange seemed to illustrate the Trump administration's approach on science:

California Secretary of Natural Resources Wade Crowfoot pleaded with the president to get past his forest management fixation. "We want to work with you to really recognize the changing climate and what it means to our forest," Crowfoot told Trump. "If we ignore that science and sort of put our head in the sand and think it's all about vegetation management, we're not going to succeed together [in] protecting Californians."

"I wish science agreed with you," Crowfoot said.

That was a fitting retort from a president who has spent much of his tenure suppressing science and muzzling scientists – apparently in defiance of the public's will. There's evidence that the American people overwhelmingly want public health experts and the science to guide the country's coronavirus response. Similarly, two-thirds of respondents in a 2019 Pew Research poll said that the government is not doing enough to protect the climate or water and air quality. Two-thirds of those polled still felt that way in another Pew environmental surveyin June, with 80 percent of people saying there should be tougher restrictions on power plant emissions, 79 percent saying the U.S. should prioritize alternative energy sources, and 71 percent calling for more fuel-efficient cars.

Trump clearly believes none of this will be a factor in his reelection bid, as he doubles down on playing down. On Tuesday, Environmental Protection Agency Administrator Andrew Wheeler, a former coal lobbyist, reappointed Tony Cox as the chair of the agency's Clean Air Scientific Advisory Committee. Cox is a former consultant to the oil and chemical industries and has pooh-poohed recent studiesconnecting fine particulate matter soot pollution to higher death rates higher COVID-19 death rates.

With leadership like that, it is perhaps no surprise that the EPA has refused to tighten rules on soot, despite estimates that it kills more than 100,000 people a year in the United States. Soot is a major issue of environmental injustice — white Americans disproportionately produce it, , while Black and Latino people disproportionately breathe it in.

From coronavirus to soot to un-natural disasters, the entire playbook of the Trump administration is to "play it down." The partisan denial of science has become so extreme that the editors of Scientific American have endorsed Trump's opponent in November's election, breaking with a 175-year-old tradition of staying on the sidelines. "The evidence and the science show that Donald Trump has badly damaged the U.S. and its people," the editors wrote, "because he rejects evidence and science."

The question is: Will the American electorate end up asking for an encore performance of this full-throated rejection of scientific evidence? Or will the ghosts of the hundreds of thousands of people who are dying from this playbook rise up to spirit Trump out of the White House?

Derrick Z. Jackson is a contributing writer from Grist.org.