Democrats have no plan: Trump is bulldozing democracy — and nobody's ready to stop him

Democrats could fight Trump's Supreme Court nominee all the way — and rally their voters. As usual, they won't 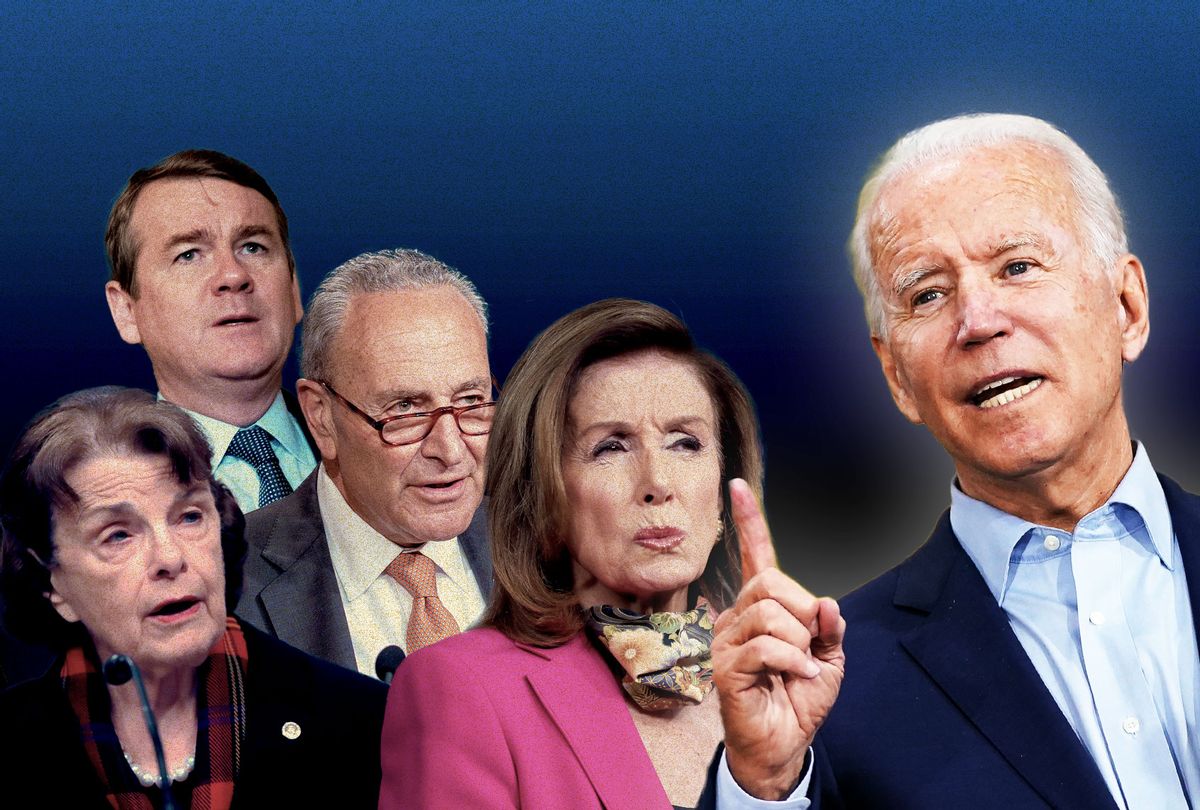 Democrats in Congress have done little more than pay lip service to bipartisanship in the week since the passing of Justice Ruth Bader Ginsburg. Even as the high court's ideological balance is up for grabs for the third time in four years — and as the president of the United States refuses to commit to a peaceful transfer of power — prominent Senate Democrats have rushed to tamp down talk of retaliatory action. This leaves little doubt that the opposition party is unequipped to handle the threat posed to democracy by Donald Trump and the Republicans.

The same Senate Republican leadership who refused to vote on Barack Obama's nomination of Merrick Garland four years ago, denying liberals their first court majority since the 1960s, has made clear they intend to ram through a new Supreme Court justice, most likely in the final week before Election Day. By his own admission, Trump wants a new justice seated by then because he intends to use the federal judiciary to nullify enough absentee ballots to hand him a second term.

While officially attempting to assuage concern about Trump's plans, prominent Republicans have essentially admitted that the plan is to have the Supreme Court, not the voters, decide this election. "I promise you as a Republican, if the Supreme Court decides that Joe Biden wins, I will accept the result," Sen. Lindsey Graham of South Carolina, chairman of the Senate Judiciary Committee, told the New York Times. "The court will decide, and if Republicans lose, we'll accept the result."

Graham reportedly wants to schedule confirmation hearings for Trump's Supreme Court nominee for the week of Oct. 12. That would mean a party-line committee vote near the end of the following week, and a vote on the Senate floor before Halloween, making it the fastest confirmation process in recent history. In addition to Trump's pick potentially ruling on an election dispute, Republicans are eager to have another ultraconservative justice seated in time for a case on the Affordable Care Act, which the Supreme Court will hear only a week after Election Day.

The Democrats' response to such threats this week can fairly be described as pitiful.

"I think Democrats are gonna continue to appeal to the sense of honor that when someone gives their word, as Lindsey Graham did, that they can't just break it," Sen. Cory Booker, D-N.J., said on Thursday, calling it "folly" to even discuss potential Democratic responses like expanding the Supreme Court. "This is a moment that I would say to any Republican of good conscience working in the administration, it is time for you to resign," Rep. Adam Schiff, D-Calif., appealed.

To be clear, Democrats have little hope of actually stopping Trump's nominee — whom he plans to announce on Saturday — from eventually taking the bench. The opposition party's best bet is to slow down the process until after the election, and use the fight as a means to rally their voters to take control of all three branches of government, by defeating Trump and seizing a Senate majority. The ultimate goal, which remains unlikely, would be to draw out the confirmation process until after Inauguration Day on Jan. 20. But simply opposing his nominee won't be even close to enough — not when Trump has made no secret of his plans to use the courts to his electoral advantage. So far, Democrats have shown no real appetite for a fight.

"We need to de-escalate, not escalate," Democratic nominee Joe Biden said during a speech in Philadelphia over the weekend. Biden has expressed a reluctance to eliminate the Senate filibuster — which requires the consent of 60 members to advance most legislation to a floor vote — and is outright opposed to increasing the number of Supreme Court justices. Sen. Dianne Feinstein of California, who would become the Judiciary Committee chair if Democrats take the Senate, has also expressed reluctance to change the rules in response to the GOP's ruthless power play.

Sen. Michael Bennet, D-Colo., even took to the Senate floor this week to seek forgiveness for former Democratic Majority Leader Harry Reid's decision to fight GOP obstructionism during the Obama era by eliminating the filibuster on judicial confirmations. In a near-unanimous vote, the Senate approved a Trump-appointed federal judge recommended by the arch-conservative Federalist Society this week. The House then approved a continuing resolution to keep the government open until Dec. 11, giving away one of its major avenues of leverage.

It's been a near-universal show of surrender from Democrats — even as their voters have sent more $200 million in donations to Democratic candidates and causes since Ginsburg's passing. If they want to rally and sustain public support, Democrats might want to fight as if they believed they could win.

Republicans lie, cheat and steal. Democrats pretend to "resist" with weak appeals to the nonexistent conscience of Republicans who long ago sold their supposed principles down the river. Meanwhile, mainstream media responds with a outdated frame of evenhandedness, seeming to imply that issues like election integrity are even up for debate. Fox News' Chris Wallace, who will moderate the first presidential debate next week, has literally selected "the integrity of the election" as one of the debate topics. This kind of false equivalency between Trump's unfounded accusations of mail fraud and the Republicans' longstanding history of voter suppression may be all the authoritarians need to succeed.

Appeals to get out and vote, which Nancy Pelosi presented this week as the last and most effective remedy, don't take into account that Trump's plan to steal the election will kick in after Americans have voted, but before all those votes have been counted. Even if Democrats take back the Senate, they won't be allowed to govern in the face of relentless obstructionism and the stolen Supreme Court. They have to know that.

Republicans have handed Democrats a legitimate rationale for expanding the court — to 11 or 15 or possibly 19 seats. Those Democrats who are willing to engage the idea are the only ones who should be taken seriously during this moment, as odd a coalition as they might make.

"When Democrats control the Senate in the next Congress, we must abolish the filibuster and expand the Supreme Court," Sen. Ed Markey of Massachusetts tweeted over the weekend, a call supported by House Judiciary Chairman Jerrold Nadler of New York.

Even Senate Minority Leader Chuck Schumer seemed receptive: "Nothing is off the table next year" if the GOP tries to fill Ginsburg's seat, he said. "We have arrows in our quiver that I'm not about to discuss right now, but the fact is, we have a big challenge in our country," House Speaker Nancy Pelosi added this week.

Whether they boycott hearings, bring impeachment articles against Postmaster General Louis DeJoy, or use Senate rules to slow down normal business, Democrats have more than a few arrows in their quiver. But despite Pelosi's brave words, Democrats' actions this week suggest they have no real intention to pull them out to save our democracy.