Maine voters want Susan Collins to stand up to the GOP: "You can no longer trust anything she says"

"If she got a spine and proved she’s really going to do what she says, then maybe I’d vote for her," one voter says 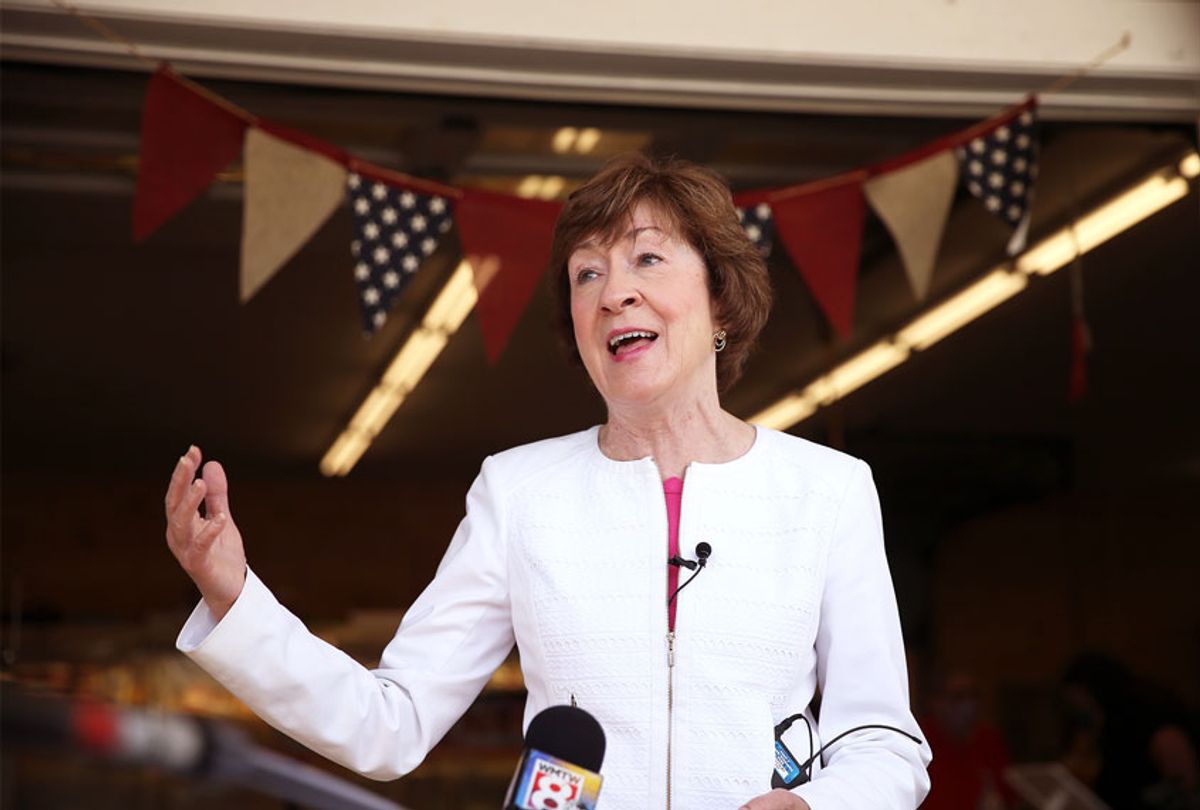 According to in-depth interviews with Maine voters, Sen. Susan Collins (R) has a lot of damage control to do in her home state if she has any hope of hanging on to her seat on Nov. 3.

With Collins trailing in the polls to Democrat Sara Gideon, Politico dispatched Kathryn Miles to the state to interview voters and what she found was an assortment of voters who have become disenchanted with the formerly popular senator — mainly due to her bowing to the whims of President Donald Trump.

According to Merlene Sanborn of Skowhegan, who has voted for Collins in the past, "There's such an atmosphere of disrespect in the campaigning. I feel like both candidates have forgotten about what matters to Maine."

Sanborn pointed to the Republican rush to replace Supreme Court Justice Ruth Bader Ginsburg — while noting Collins has given no assurances about a vote after the election but before a new Senate is seated — saying, "It's just too important to rush the process. The Senate needs to take the appropriate amount of time to really consider the candidates. I want to see Susan Collins be a true leader and publicly advocate for that."

One-time Collins voter Cheryl Staples, 63, echoed Sanborn's comments about the Supreme Court vacancy, stating: "We expect Collins to go with her conscience — not her party. It's going to take more than saying she won't vote until the election to demonstrate that."

The Politico report notes that a recent polls shows that 59% of Maine voters want Collins to "delay voting on the nomination and approval process until a new president is sworn in in January," with one Maine resident saying he doesn't trust her after she voted to confirm Supreme Court Justice Brett Kavanaugh.

"He's a bad person and not fit for the court. I trusted her to take a stand on his fitness," explained retired Air Force medic Dick Enright who said he supported Collins until the Kavanaugh vote.

As for the push to replace Ginsburg, Enright wants it held off until after Inauguration Day, explaining, "Fair is fair. [Mitch] McConnell blocked Obama when he had the reins. What's good for the goose is good for the gander."

As for Collins, he stated, "She's just playing a game and trying to gain votes by saying as little as possible. If there was a chance she'd really turn around and take a real stand on this issue, I'd be happy. But I don't see her doing that."

According to one voter who would only identify himself as Mike, Collins is  ". . . screwing us up with all of her flip-flopping. You can no longer trust anything she says. She needs to smarten up and correct herself. If she got a spine and proved she's really going to do what she says, then maybe I'd vote for her."

Dan Shea, author of the local poll on Collins said the responses should come as no surprise.

"A lot of Mainers think the senator works too hard to be on both sides. They want some clarity; they want Susan to take a side. If she is too calculating on the nomination question, she'll threaten her brand as a moderate, lose independents and swing Democrats, and maybe even end her career in the Senate," he remarked.