Trump campaign's rent payments to Hicksville, New York, might be of interest to a tax fraud investigation 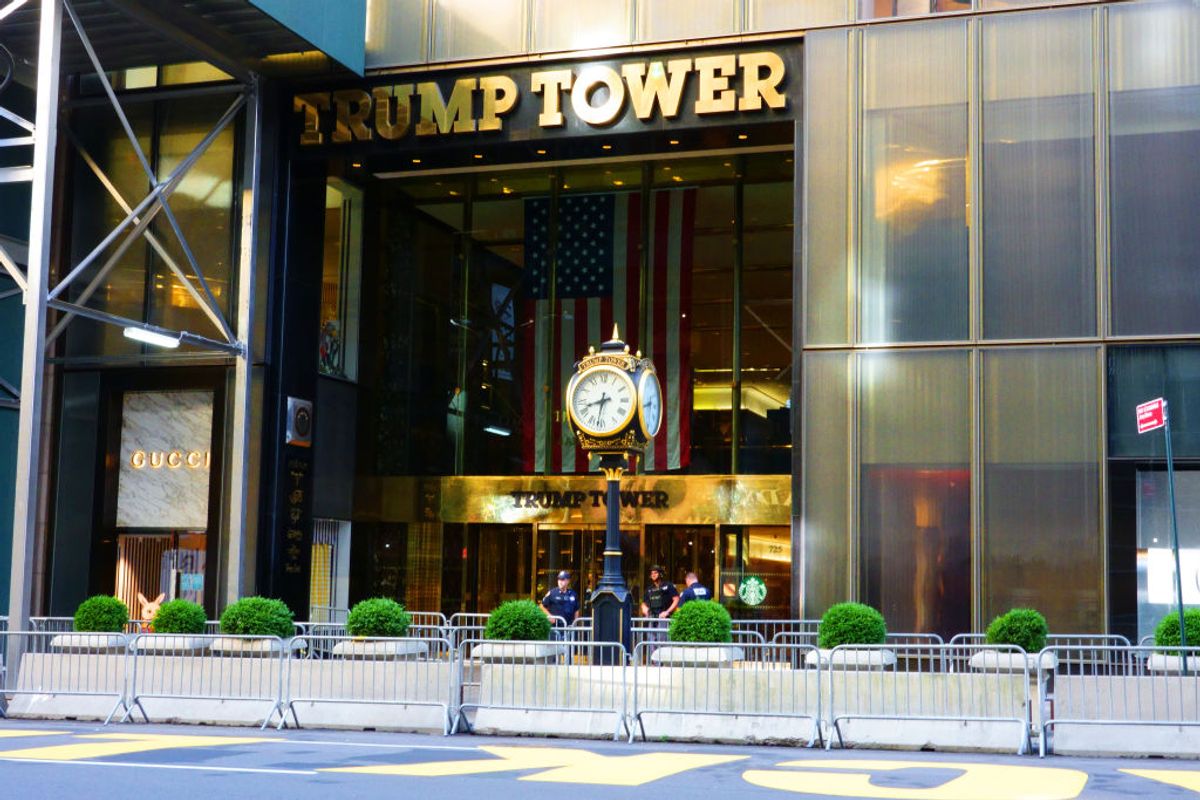 President Donald Trump has charged his own campaign hundreds of thousands of dollars in rent for offices in Trump Tower for more than five years. But the campaign doesn't always send its rent to Trump Tower. In fact, most of the checks have gone to a post office box in Hicksville, New York, a suburban community on Long Island. It's not clear why, or who is receiving those checks. But experts say that the address may be of interest to Manhattan District Attorney Cy Vance, who in a court filing earlier this week made his clearest statements yet about the scope and focus of his criminal investigation into President Trump's finances.

The Trump campaign has rented office space at Trump Tower, off and on, since Donald Trump first announced his candidacy in June 2015. Exactly how much space the campaign actually uses in the landmark Fifth Avenue building is unclear. FEC filings show that the rent started around $35,000 a month, then jumped over the $100,000 mark after Trump won the 2016 Republican nomination, before settling at its current rate of $37,541.67 a month, or about $450,500 a year. Sometimes the rent spikes, for reasons that are difficult to understand.

But while the campaign's payments go to Trump Tower Commercial LLC, the business operation behind Trump Tower  — and ultimately to Trump himself — they don't always go to Trump Tower. Federal Election Commission records show that most of those checks have been sent to P.O. Box 1926 in Hicksville, which is a suburban town in central Nassau County, just south of Oyster Bay on the affluent North Shore of Long Island.

The Hicksville post office box has been described by Trump money watchers as the "white whale" of Trump's financial dealings. It is, in a word, bizarre — even by Trump standards. (The campaign did not reply to multiple specific requests for comment.) It's unclear whether other Trump Tower commercial tenants, such as the Industrial and Commercial Bank of China, for instance, send their rent checks to Hicksville, or if they pay at the building itself — as the campaign itself did, for a while.

In the early days of the campaign, however, it wasn't just rent — some of the Trump campaign's payroll also went through Trump Tower Commercial LLC, but apparently to a certain type of employee.

But even given that confusing history, FEC filings show that 2020 is turning out to be an exceptional year in terms of the destination of the Trump campaign's rent checks to Trump Tower Commercial LLC.

In 2015, 2016 and 2017, all rent checks all went to the Hicksville address. The rent payments stopped after September 2017, but resumed in 2018, the year after the Trump tax bill passed, and the same year that the campaign also took up offices in Rosslyn, Virginia. All rent checks in that year, 2018, went upstairs to the accountants in Trump Tower. But in the first half of 2019, the checks went back to Hicksville. Then, in the second half of that year, they once again went to Trump Tower.

The pattern grew even more erratic in 2020. This year, public filings show, the campaign has so far sent six of its eight rent checks to Hicksville — the two outliers being April and May, when the coronavirus ravaged the city and the checks went to Trump Tower, in Manhattan.

Vance's announcement this week that his office is investigating Trump for criminal tax fraud and misrepresenting business records might throw the Hicksville mystery in a new light.

Vance is the district attorney of New York County, which is the same thing as the borough of Manhattan. He has no jurisdiction anywhere else. So if Vance is investigating Trump for tax fraud, he must believe that Trump defrauded Manhattan authorities in a unique way — through either school, income or property taxes. While New York state Attorney General Letitia James is also interested in Trump's taxes, she has not announced a similar criminal tax fraud investigation. And there is, as far as public records show, no federal investigation into Trump's taxes.

Hicksville is in Nassau County, about 30 miles east of Manhattan. If Trump attached the Nassau County address to Trump Tower payments that should otherwise have qualified for income, payroll or occupancy taxes in Manhattan, and did not make that clear — or actively concealed it, possibly with a second bank account — that, experts say, could amount to fraud.

Another possibility is that Trump is using the Hicksville address to hide portions of rent income, which could give him a property tax advantage in the city, where appraisers tie income to property value and tax.

A corporate accountant told Salon that if Trump has expenses "that should be allocated to the Trump Organization, but are paid outside to another entity, like Trump Tower Commercial, less expenses means more income — so he could inflate the value to make himself look much wealthier than he is."

It turns out that the campaign didn't only expense its rent there. It also spent payroll.

In the 2016 election cycle, federal filings show, the Trump campaign paid then-candidate Trump's personal bodyguard Keith Schiller $2,574 a week, occasionally a little more. Trump would make those payments himself, routed through payroll at Trump Tower Commercial LLC in Hicksville, and the campaign would reimburse him.

Schiller, however, was unique. Trump had a number of Trump Organization employees on the campaign payroll at one time or another. Hope Hicks, for instance, or the Trump Organization's chief legal officer, Allen Garten. None of those people, however, were ever on the Trump Tower Commercial LLC payroll. Trump routed their campaign salary through Trump Payroll Corp., which he also owned.

When Schiller went to work at the White House, he told the U.S. government in his financial disclosures that he had been paid $160,000 a year by the Trump Organization. He also said the campaign had paid him $70,000, when campaign filings indicate he made much more than that. What's more, those filings also indicate that Schiller was not on the Trump Organization payroll, but specifically on the payroll at Trump Tower Commercial LLC.

This makes a difference. At the time, Trump Tower Commercial was owned by Donald Trump personally, according to his 2015 and 2016 financial disclosures. This is a unique thing in TrumpWorld: Trump Tower Manhattan (or Hicksville) was all his.

(Well, along with any "silent partners" in the four Trump-owned entities between which Trump Tower was split. One of those was an obscure entity called Tipperary Realty Corp., which is owned by Donald Trump but lists his son, Eric, as CEO. Nothing in TrumpWorld is ever simple, an insider told Salon, but if anything is strange, it's intentional.)

"It appears that Trump had only certain employees on the Trump Tower Commercial payroll, rather than the Trump Organization's," campaign finance and government ethics law expert Brett Kappel told Salon. "Employees like Keith Schiller, his personal driver, the night security guard at Trump Tower — employees in a position to know embarrassing and possibly incriminating information about Trump."

It could also be that the story of the wandering rent checks is no big deal. One corporate accountant told Salon that the location of the payments did not raise any flags for him, and that outside of misrepresenting income, the arrangement appears benign.

Trump could be actively trying to keep this one entity — his flagship building — clear of any dirt. If so, that would seem to require a lot of legwork.

In other words, a New York City tax attorney told Salon, the Hicksville setup might not be about falsifying tax records, but falsifying business records — also a subject of Vance's subpoenas.

"The whole thing is a lie perpetrated by Trump and [Trump Organization CFO] Allen Weisselberg, who concocted a method to defray the salary costs of the Trump Organization and shift them to the campaign, on the backs of donations from unsuspecting supporters," said a source with knowledge of the payment arrangements.

It may be worth noting that the first of Trump's infamous checks to former personal attorney and "fixer" Michael Cohen — reimbursing the $131,000 in hush money paid out to adult film star Stormy Daniels — weren't signed by Trump himself, but by Weisselberg and Donald Trump Jr. The president began writing those checks from his personal account only a few months into his term. Before doing that, however, he quietly gained access to the trust into which he had put all his assets, as a symbolic promise to the American people that he could be trusted.