As a helium shortage looms, "vacuum balloons" could save physics, medicine, and birthday parties 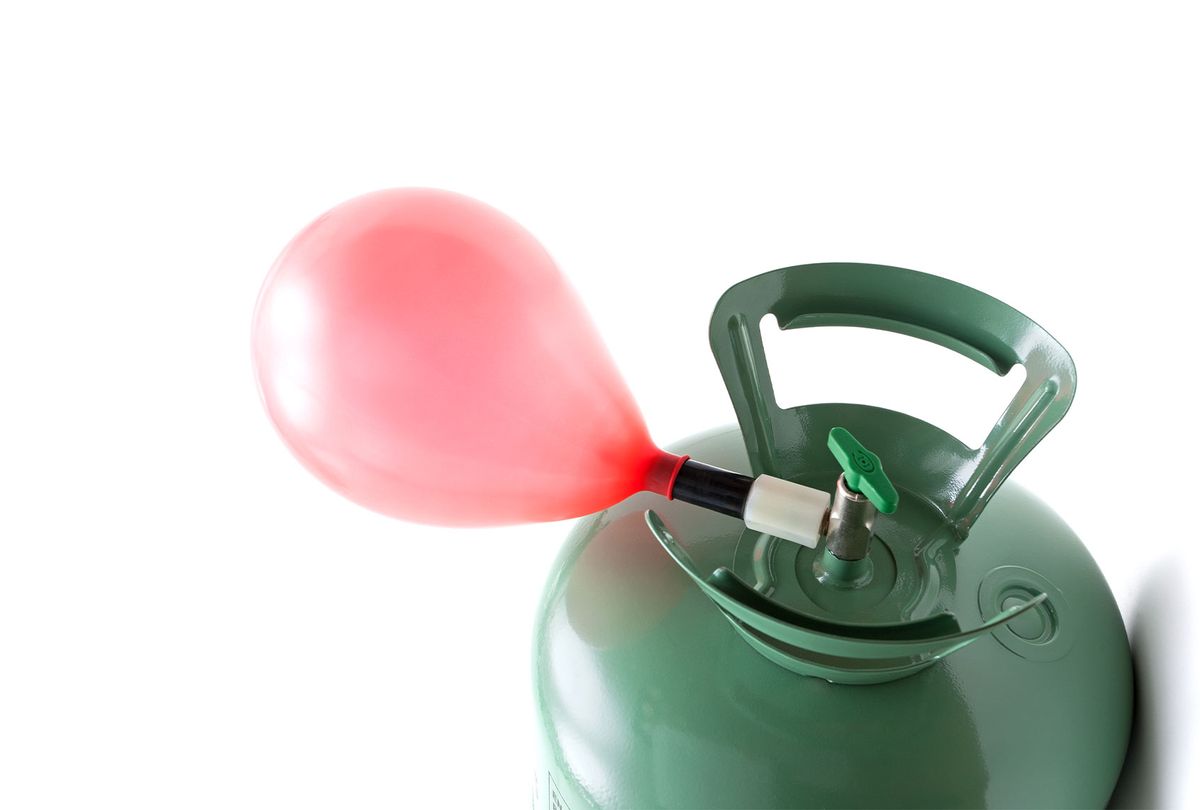 Helium balloons are a quintessential party favor, a fixture of any birthday, wedding or anniversary party. But few consumers seem to know that helium is a limited resource — and one which physics experiments and medical imaging tools rely on to work. Worse, once a helium balloon pops, that gas is lost forever — it floats upwards and escapes into space, never to be seen on Earth again.

Now, with the specter of a recent helium shortage still looming, consumers are being asked to ration their helium in order to save science and medicine. The idea that party supply companies and consumers can't give up helium balloons in order to save these more worthy enterprises might seem a tad selfish; but this is how the market thinks. Yet a few inventors around the country have a brilliant compromise: what if we could make a "balloon" that needed no helium gas at all?

Indeed, as global helium supplies dwindle and prices skyrocket, some enterprising physicists around the country hope to create a prototype of a "lighter-than-air" vacuum balloon that would effectively float using "nothing." And their research could just save science, medicine, and parties all at once.

While helium is largely used by consumers to fill balloons at parties and events, this only accounts for about 10% of total helium use. It is mostly used for medical and scientific purposes and research and to inflate flying objects like blimps, weather balloons and high-altitude balloons that provide internet access to remote areas. It is also used to produce fiber optic cables and semiconductor chips for phones and other electronics, as well as in its liquid state as a coolant for superconducting magnets.

Helium, which is a nonrenewable resource extracted from natural gas and has a limited shelf life, has been in short supply in recent years due to the depletion of gas reserves in the US. The shortage has forced scientists to shut down projects and superconducting magnets that rely on helium while party stores that rely on balloon sales have shuttered due in part to the dwindling supply.

The coronavirus pandemic has reduced demand for both industrial and consumer use, meaning that the shortage has ebbed for now, but "prices in many cases have defied the laws of supply and demand," forcing scientists to pay more than double for a liter of helium than they paid last year, according to Physics Today. It's unclear whether the shortage will recur once economies recover.

Some physicists have a plan to develop floating balloons that don't use helium. These balloons can be a game-changer for both industrial uses like blimps and internet access balloons, as well as the fun balloons like those kids get at birthday parties.

Andrey Akhmeteli, a physicist and president of the Houston-based LTASolid Inc., and Andy Gavrilin, a researcher at National High Magnetic Field Laboratory at Florida State University, first applied for a patent on a design for a vacuum balloon nearly 15 years ago. They recently released a preprint on a redeveloped design made from commercially available materials. The idea for a lighter-than-air vacuum balloon dates back to 1670, the researchers wrote, but has yet to materialize because it is "very difficult to design and manufacture."

"It's a new and exotic technology, and it's very confusing for many people because everything really looks exotic, strange, unusual," Gavrilin said in an interview with Salon. "It is just a large spherical shell, and the shell is really thin. It consists of three layers. In the middle we have a honeycomb. And the face skins are very thin, rigid, solid spheres, and the layers support each other and work together."

"The design is a spherical shell. However, a homogeneous spherical shell is not able to withstand the atmospheric pressure. So we need a sandwich shell," Akhmeteli added. "Sandwich structures are widely used, say in aerospace and in construction everywhere. "So it is just a sandwich shell, a relatively soft structure between two very hard structures. So we were able to show that it can be light enough to float in air and strong enough to withstand the atmospheric pressure."

The technology could be used for "everything that is flying," Gavrilin said. That includes internet access balloons and potential security and intelligence operations, Akhmeteli added. Using the technology for the kind of balloons you would find at a birthday party is not "economically feasible" right now but could certainly "become cheaper" once the technology is developed.

"So first we need to develop applications for serious things," Gavrilin said, and "after that, you can start making some funny things."

Miles Beaux, a physicist at the Los Alamos National Laboratory, is leading a team working on its own design that uses "ultra lightweight aerogel materials."

"Aerogels are ultralight materials that are basically 98 to 99 percent open space or void space, so they're very low density materials, and the ones we produce here are about 20 times the density of air," he explained in an interview with Salon. "You can create a material where, minus the void space, the overall density would be less than air and it would float, but that's assuming that there is no air in the void space. You have to somehow remove the air in order to get it to float.

"Ever since I learned about aerogels, I had this idea that you could take out a chunk of solid material out of the vacuum chamber, and it would float like a helium balloon," he said. "You have to have a structure that can withstand the crushing force of atmosphere when you evacuate it like a vacuum chamber, but at the same time, be lightweight enough in order to reach the buoyancy necessary to float. We never had materials like that until the aerogels materials and increases in the strength of these materials are getting to the point where you could actually conceivably have a vacuum chamber or vessel that's lightweight enough."

Beaux said the technology could be used to for any sort of remote sensing technology, to deliver internet access, like Alphabet's Project Loon, and even for Amazon's plan to develop floating warehouses that use drone deliveries.

Once the technology is scaled, he said, "there might be a crossover point" at which it can be used for party balloons.

The two teams disagree on the best approach to develop the technology. Akhmeteli questioned whether aerogel materials would work.

Akhmeteli continued: "Aerogels are just, I would say a collection of holes. . . . So if you have aerogel, you have air inside. And as a result, their density is higher than that of air. "One could say, well, we can cover the aerogel with film and there will be a vacuum inside, but this structure will fail."

Beaux said that his team has produced several small prototypes showing that the technology works and "actually discovered that for certain densities, these materials actually hold vacuum and you don't need any membrane or any balloon film to hold the vacuum."

"It was like a balloon that's filled with nothing instead of helium," he said. "Once we discovered that we were able to create some spherical shells, so they're basically hemispheres within walls, and we put two of them together and then we pump all the air out of it. And we've been able to show that these materials will hold vacuum without active pumping for up to 12 hours. And the materials we are using, even though they're almost 98 to 99 percent complete empty space, they're still very strong. While it was under evacuation, not only did it not crush under atmospheric pressure, we were able to bang on it with a ball-peen hammer and the ball-peen hammer just bounced off of it."

But Beaux noted that these small-scale prototypes were not air buoyant.

"We've demonstrated that we can build them, we can pull vacuum, but in order to make them flow to air, we just need to make them bigger," he said.

Akhmeteli and Gavrilin say they are "trying to find" funding to develop their prototype and have been hamstrung by access to necessary technologies.

Gavrilin argued that these technologies could quickly become commercially available if there were enough investment.

"The only thing that can make it commercially available is money and desire," he said. "So we have a desire, but some lack of money."

Both teams have drawn industry interest, but have been hindered by production limitations. Akhmeteli said their talks with commercial interests fell apart because they could not access the technology to make the right size prototype. Beaux likewise said that the manufacturing limitations pose scalability issues.

"The manufacturing is the hardest part. We could conceivably go into production mode with a single mold right away. We could start selling them immediately, but it would be very slow," he said. "The difficulty is just in the scale."

Akhmeteli argued that his was the simplest solution to a problem that has been worked on for over 350 years, while others are more complicated with too many technological requirements.

While others are trying to "compromise," he said, it's very important to focus on the simplest technology "if you would like to produce something in quantity."

"All existing technologies on this subject are exotic. And actually they are completely new. It's a very revolutionary thing," Gavrlirin added. "That's why businesses would like to figure out how quickly they can do it and they just calculate how much money and so on. And they are afraid to do that.. It appears to me that right now we can prove that it can be done. And in our papers, in our publications,  we are trying to prove it. We're just trying to prove the feasibility. And now it looks much more feasible than five years ago."

Alex Wittenberg contributed to this report.