Tucker Carlson is a big fan of the phrase "they hate." Usually, he’s talking about Democrats

Fox News is up to five times more likely to use the word "hate" in its programming than its main competitors, according to our new study of how cable news channels use language.

Fox particularly uses the term when explaining opposition to Donald Trump. His opponents are said to "hate" Trump, his values and his followers.

Our research, which ran from Jan. 1 to May 8, 2020, initially explored news of Trump's impeachment. Then came the coronavirus. As we sifted through hundreds of cable news transcripts over five months, we noticed consistent differences between the vocabulary used on Fox News and that of MSNBC.

While their news agendas were largely similar, the words they used to describe these newsworthy events diverged greatly.

For our study, we analyzed 1,088 program transcripts from the two ideologically branded channels — right-wing Fox and left-wing MSNBC — between 6 p.m. and 10:59 p.m.

We expected to find that both of the strongly ideological networks made use of such words, perhaps in different ways. Instead, we found that Fox used antipathy words five times more often than MSNBC. "Hate" really stood out: It appeared 647 times on Fox, compared to 118 on MSNBC.

Fox usually pairs certain words alongside "hate." The most notable was "they" — as in, "they hate." Fox used this phrase 101 times between January and May. MSNBC used it just five times.

To put these findings in historic context, we then used the GDELT Television database to search for occurrences of the phrase "they hate" on both networks going back to 2009. We included CNN for an additional comparison.

We found Fox's usage of "they hate" has increased over time, with a clear spike around the polarizing 2016 Trump-Clinton election. But Fox's use of "hate" really took off when Trump's presidency began. Beginning in January 2017, the mean usage of "they hate" on the network doubled.

So who is doing all this hating — and why — according to Fox News?

Mainly, it's Democrats, liberals, political elites and the media. Though these groups do not actually have the same interests, ideology or job description, our analysis finds Fox lumps them together as the "they" in "they hate."

As for the object of all this hatred, Sean Hannity, Tucker Carlson and other Fox hosts most often name Trump. Anchors also identify their audience — "you," "Christians" and "us" — as the target of animosity. Only 13 instances of "they hate" also cited a reason. Examples included "they can't accept the fact that he won" or "because we voted for [Trump]."

Citing liberal hate as a fact that needs no explanation serves to dismiss criticism of specific policies or events. It paints criticism or moral outrage directed at Trump as inherently irrational.

For loyal Fox viewers, these language patterns construct a coherent but potentially dangerous narrative about the world.

Our data show intensely partisan hosts like Hannity and Carlson are more likely than other Fox anchors to use "they hate" in this way. Nevertheless, the phrase permeates Fox's evening programming, uttered by hosts, interviewees and Republican sources, all painting Trump critics not as legitimate opponents but hateful enemies working in bad faith.

By repeatedly telling its viewers they are bound together as objects of the contempt of a powerful and hateful left-leaning "elite," Fox has constructed two imagined communities. On the one side: Trump along with good folks under siege. On the other: nefarious Democrats, liberals, the left and mainstream media.

Research confirms that repeated exposure to polarized media messages can lead news consumers to form firm opinions and can foster what's called an "in-group" identity. The us-versus-them mentality, in turn, deepens feelings of antipathy toward the perceived "out-group."

The Pew Research Center reports an increasing tendency, especially among Republicans, to view members of the other party as immoral and unpatriotic. Pew also finds Republicans trust Fox News more than any other media outlet. 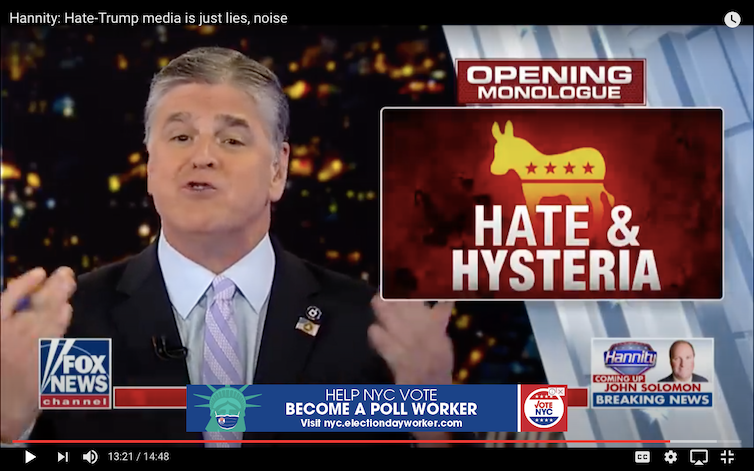 Leaning into intense partisanship has been good for Fox News, though. In summer 2020 it was the country's most watched network. But using hate to explain the news is a dangerous business plan when shared crises demand Americans' empathy, negotiation and compromise.

This fraying of social ties helps explain America's failures in managing the pandemic — and bodes badly for its handling of what seems likely to be a chaotic, divisive presidential election. In pitting its viewers against the rest of the country, Fox News works against potential solutions to the the very crises it covers.