"We need you to help us watch them not just on Election Day but also during early voting," Don Jr. has told voters 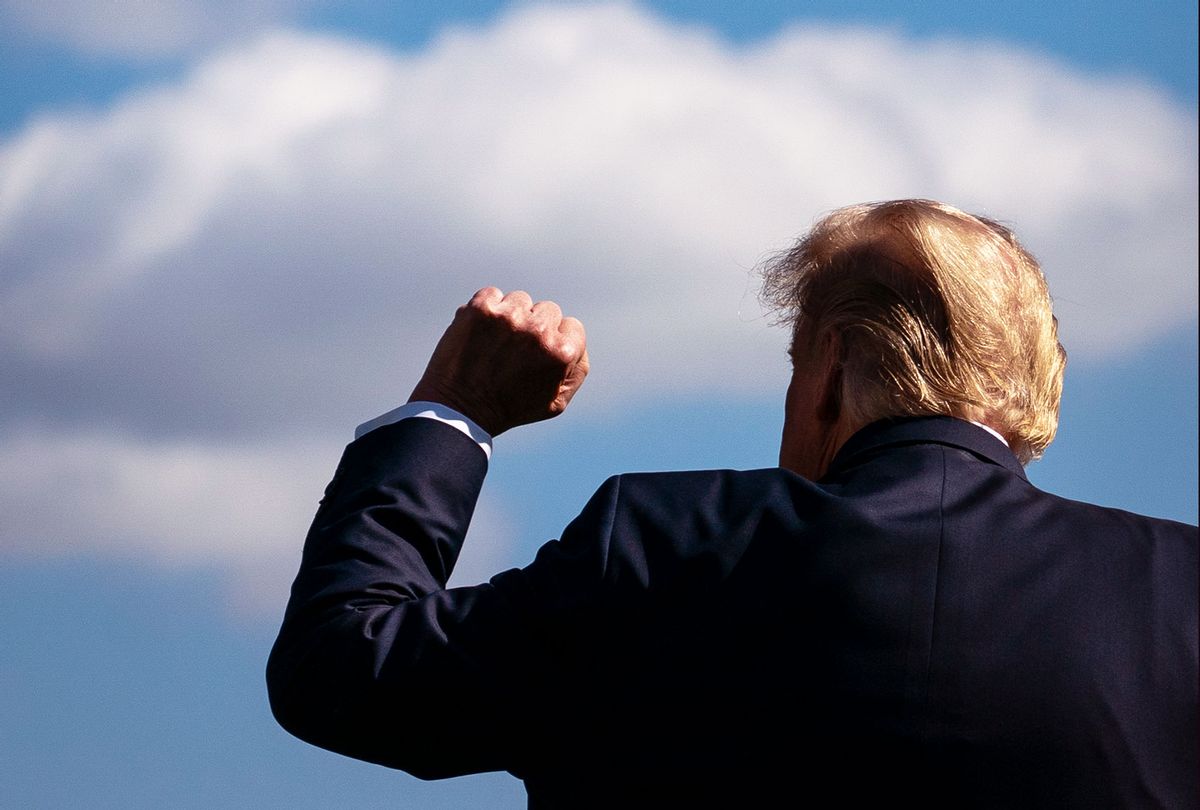 U.S. President Donald Trump gestures as he walks toward Marine One on the South Lawn of the White House on September 30, 2020 in Washington, DC. (Drew Angerer/Getty Images)
--

Trump campaign senior adviser Justin Clark told a room of Republican lawyers during a closed-door meeting in Wisconsin last year that the organization saw a "huge, huge, huge, huge" opportunity in what it referred to as its "2020 Election Day Operations."

"First and foremost is the consent decree's gone," he said.

Clark referenced a recently-expired court order barring Republican operatives from a number of voter-intimidation activities. After the Republican National Committee hired off-duty law enforcement to intimidate voters in minority communities in 1981, the consent decree was born.

Ruling there was no proof that Republicans had recently violated the decree, a federal judge dropped it in 2018. That set up Election Day in 2020 to be the first time in nearly four decades where the Republican National Committee will not be required to obtain advance approval for any planned "ballot security" measures at the polls. It was this opening that Clark dubbed a "huge" deal.

A few months after that closed-door meeting, the Trump campaign launched "armyfortrump.com" — an official website recruiting supporters to pitch in with voting operations, including on Election Day. Drawing on military language and iconography — an alternate URL is "defendyourballot.com" — the channel calls on supporters of the commander-in-chief to "enlist" in a number of election activities, working alongside "battle tested Team Trump operatives" on the "frontlines" of the campaign.

Though the website first launched in spring, Trump himself promoted again this week in a post-debate tweet Tuesday inviting supporters to become "a Trump Election Poll Watcher."

"The radical left are laying the groundwork to steal this election from my father," Don Jr. alleged.

"Their plan is to add millions of fraudulent ballots that can cancel your vote and overturn the election," he further claimed, without evidence. "We cannot let that happen."

Don Jr. also suggested the importance of a physical presence at the polls as he urged supporters to "enlist" under the ballot defense URL.

"We need you to help us watch them not just on Election Day but also during early voting and at the counting boards," he said. "Don't let them steal it."

Forbes reported last week that the Twitter hashtag #ArmyForTrump catalogued "a large number of posts promoting violence against the president's opposition, in some cases specifically naming Biden and other leading Democrats as enemies."

The hashtag, the outlet added, was used in posts attacking "a wide range of targets, including Jewish financier and philanthropist George Soros, Black Lives Matter leaders, Amazon founder Jeff Bezos and others."

Some Trump supporters have already heeded the calls to action. Last week, for example, a crowd of the president's supporters, some of whom were waving Trump flags, temporarily blocked access to an early voting location in Fairfax, Va.

But in the wake of the president's recruitment tweet following his first debate against Democratic rival Joe Biden, the #ArmyForTrump hashtag appears to have been infiltrated by another army: fans of Korean pop music. The development echoed a prior troll from June, in which the same group inflated ticket requests, and campaign expectations, for Trump's sparsely attended "comeback rally" in Tulsa, Okla.

The president, who has been reported to have disparaged troops in public and private alike, often tries to associate himself with the language and imagery of the military and law enforcement —  "my military" and "my generals" — in what is widely seen as an attempt to project strength. Trump has threatened to deploy active-duty troops against peaceful protesters, and often invokes Bikers for Trump, a niche group of supporters, as a similar threat.

The Trump campaign also leans on militarized language for fundraising efforts, such as an email in June, which read: "You've been identified as one of President Trump's fiercest and most loyal defenders, and according to your donor file, you'd make an excellent addition to the Trump Army."

The email sought to reward donors with "exclusive" camouflage campaign hats as something of a campaign uniform.

"The President wants YOU and every other member of our exclusive Trump Army to have to something to identify yourselves with, and to let everyone know that you are the President's first line of defense when to come to fighting off the Liberal MOB," it said.

Recently, multiple senior Pentagon officials told The New York Times that there had been discussions of the possible resignations of top department brass — starting with Chairman of the Joint Chiefs of Staff General Mark Milley — should Trump try to deploy troops on U.S. streets during the election following criticisms of his handling of the Black Lives Matter protests in June.

After the president posted the recruitment tweet, General Michael Hayden, director of the CIA and NSA under former President Barack Obama, warned on Wednesday that state governors themselves should develop plans to counter Trump's army of supporters — with the national guard.