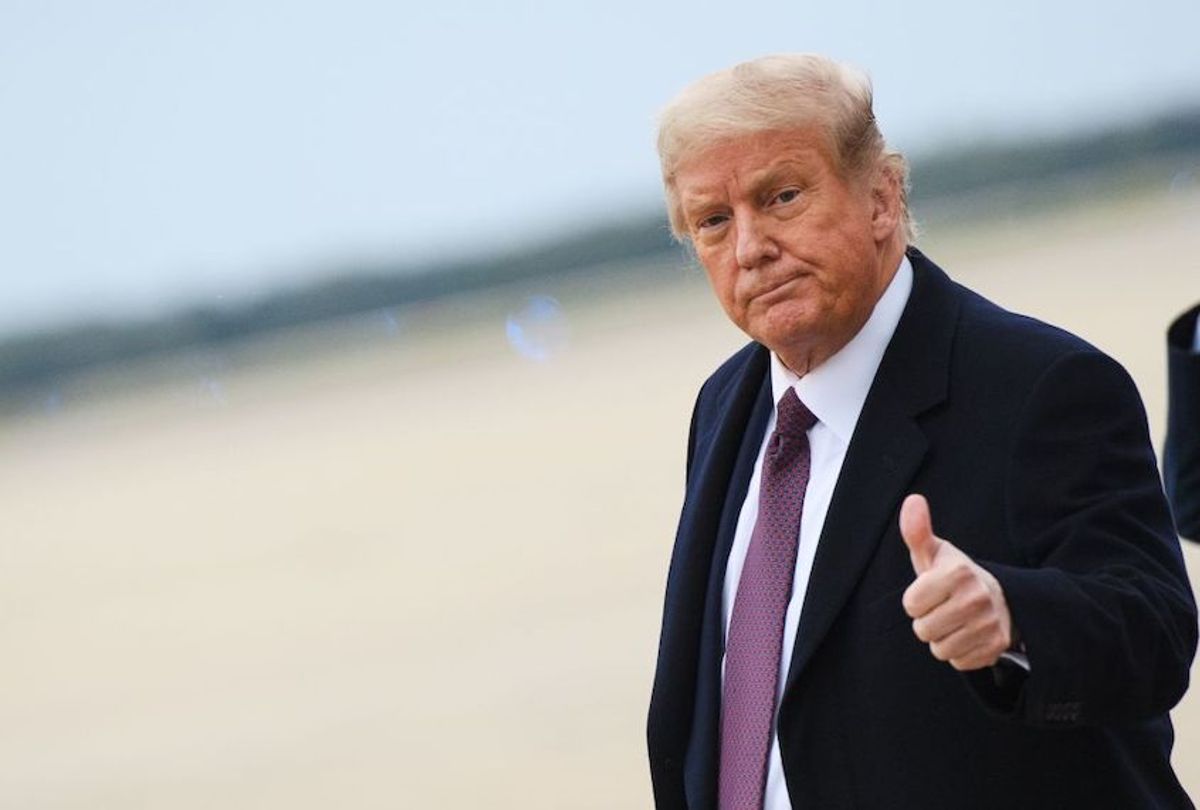 US President Donald Trump gives a thumbs up as he steps off Air Force One upon arrival at Andrews Air Force Base in Maryland on October 1, 2020. (Photo by MANDEL NGAN/AFP via Getty Images)
--

President Donald Trump interacted with "dozens" of people after flying to a fundraiser in New Jersey on Thursday even though the White House was already aware that top aide Hope Hicks had tested positive for the coronavirus, according to multiple reports.

Trump announced overnight that he and first lady Melania Trump had tested positive for the coronavirus and would isolate as they recover. The news prompted concerns among White House aides, some of whom privately told The New York Times that Trump "has comorbidities that could make him more susceptible to a severe bout of the virus."

Trump's announcement came after Bloomberg News reported that Hicks, one of his closest advisers, had tested positive. Two hours later, Trump confirmed the news in a Fox interview.

Hicks had been in extensive close contact with Trump as part of a small group that helped prepare him for the debate and traveled with him earlier this week.

Hicks tested negative for the virus on Wednesday and traveled with the president aboard Air Force One, according to CBS News' Weijia Jiang. She developed symptoms during the day and later tested positive.

The White House knew of Hicks' positive test by Wednesday night or Thursday morning, but Trump still traveled to a fundraiser on Thursday afternoon, hours before testing positive himself, according to Jiang and CNN's Kaitlan Collins. Hicks did not make the trip and the president traveled with a smaller team than usual, according to NBC News.

Trump's closest aides also worried that the president was "feeling poorly" on Wednesday, according to Bloomberg's Jennifer Jacobs. Some aides dismissed it as fatigue but others began to "worry he had the coronavirus."

Despite Hicks' positive test and his aides' concerns, Trump and his entourage flew to a fundraiser at his Bedminster, N.J. golf club on Thursday where the president, who did not wear a mask, "was in close contact with dozens of other people," according to The Washington Post. Trump posed for photos with supporters at the event, according to The Daily Beast.

"Why did the press secretary still hold a briefing despite knowing she had come into contact with somebody who had just tested positive for coronavirus?" she questioned.

Jacobs reported that McEnany was unaware of Hicks' positive test.

"Only a very, very small circle knew," Jacobs reported. "Even some of Trump's most trusted advisers were kept in the dark about Hicks' illness."

It's unclear when Trump and Hicks were infected and how many people they may have exposed. Trump traveled with his full entourage and family to Cleveland for Tuesday's debate against Democratic nominee Joe Biden. Trump's family were seen maskless in the audience. MSNBC reported that Trump's family and top aides had recently traveled with Hicks.

Trump, who has repeatedly mocked mask wearing, tried to attack Biden for wearing a mask in public.

"I don't wear masks like him," he said. "Every time you see him, he's got a mask. He could be speaking 200 feet away from them, and he shows up with the biggest mask I've ever seen."

Biden was reportedly tested for the coronavirus on Friday morning and is awaiting results.

A spokesman for Vice President Mike Pence and his wife Karen said they tested negative for the virus.

Trump's positive test is expected to upend his campaign.

"Even if Mr. Trump, 74, remains asymptomatic, he will have to withdraw from the campaign trail and stay isolated in the White House for an unknown period of time," The New York Times reported. "If he becomes sick, it could raise questions about whether he should remain on the ballot at all."

The campaign has already scrapped its Friday rally in Florida but still sent out an email early Friday promoting a "once-in-a-lifetime opportunity to enter to win a trip to meet your favorite president."

It is unclear if Trump will be able to participate in the next debate, which is scheduled for October 15.

The announcement could also upend plans to confirm Trump Supreme Court nominee Amy Coney Barrett, according to Bloomberg. Hearings are expected to begin on October 12.

CNN's Dr. Sanjay Gupta noted that Trump is at "increased risk" of severe symptoms because of his "age and his pre-existing conditions."

Biden sent his well wishes to the Trumps on Friday even though the White House did not reach out to his campaign to inform them of potential exposure.

"Jill and I send our thoughts to President Trump and First Lady Melania Trump for a swift recovery," Biden said. "We will continue to pray for the health and safety of the president and his family."