With Trump in quarantine and his campaign suspended, don't think Republicans are dropping their nefarious schemes 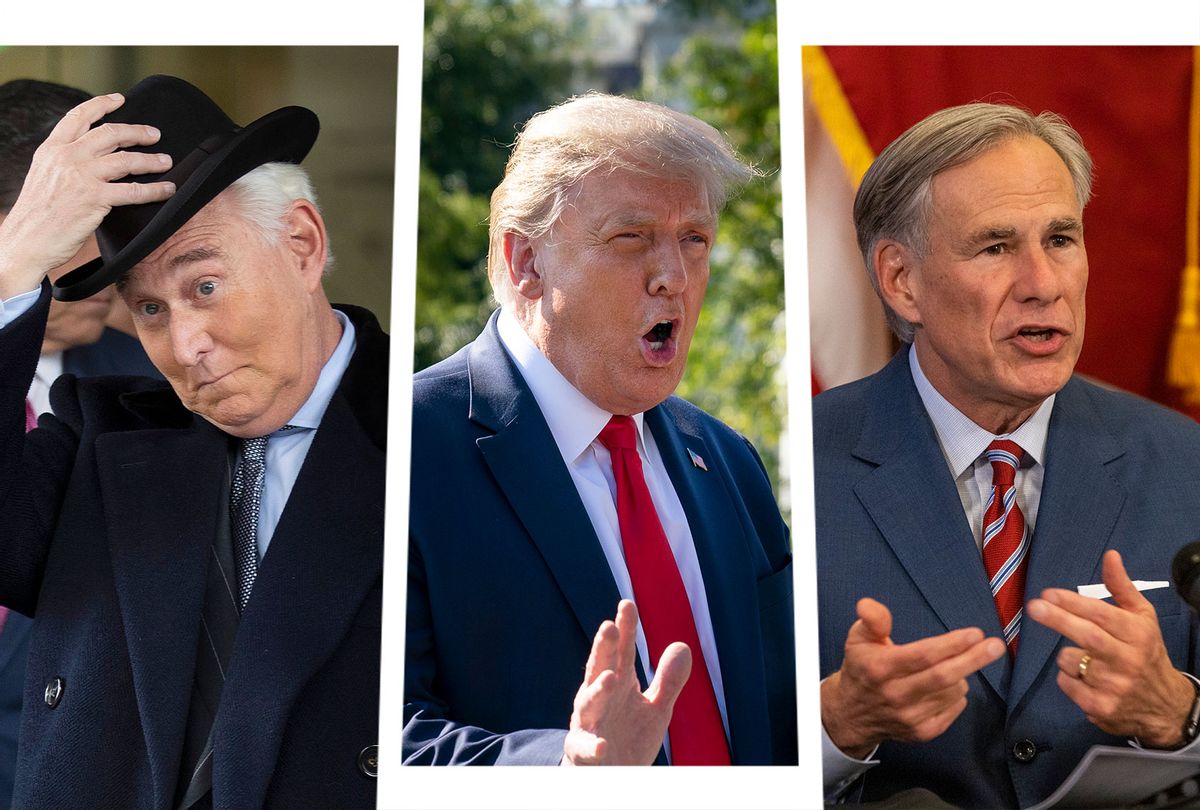 Leave it to Donald Trump to test positive for COVID-19 just two days after a disastrous debate performance. It's tempting to think this is yet another of his reality show stunts, but it's hard to believe that he could get away with faking something like this considering that the Trump White House leaks like a sieve. It's more likely he does have the virus and his best-case scenario will be that he's one of the lucky asymptomatic cases and can spend the rest of the campaign testifying to his youthfulness and strength, no doubt attributable to "good genes."

As the man himself says, "We'll see what happens."

Meanwhile, there's still a lot going on that requires some sustained attention from the American people, none more important than the ongoing threat that the election, now just a month away, is going to be sabotaged. I don't use that word lightly. It is becoming very obvious that this is being planned and will be implemented in an attempt to ensure that Trump cannot lose.

In fact, according to some incredible reporting by Jim Rutenberg in the New York Times Magazine, Republican operatives were locked and loaded back in 2016, but just didn't need to pull the trigger. They had lawyers at the ready to contest the election on the basis of "voter fraud" in all those close states if it had gone the other way.

Rutenberg's story makes the often-overlooked point that this is not really a Trump operation. Sure, he said back in 2016 that he wouldn't accept the results unless he won and this time he's telling his voters that the only way he can lose is if the vote is rigged. But this isn't his idea. He's just the first Republican to crudely telegraph the plan ahead of time.

The history of vote suppression in America goes all the way back to the beginning, of course. Only white men were allowed to vote. But white supremacists turned it into a winning agenda during Reconstruction and have continued to profit from it ever since. After the Voting Rights Act was passed in the 1960s and racist political power shifted from the Democrats to the Republicans, it turned into a well-funded, subversive, anti-democratic political strategy. During the last couple of decades it's become the GOP's life raft. The majority of their almost exclusively white party is in full-blown rebellion against what is soon to be a multiracial, multi-ethnic majority, which for obvious reasons is centered in the Democratic Party.

Donald Trump speaks to all of that, sometimes in blatant terms that the vote suppressors undoubtedly wish he wouldn't. But I'd bet money that half the blather about voter fraud that everyone assumes are just Trumpisms are things he's heard from establishment Republicans.

A lot of us have been chronicling this phenomenon for a long time. For me, the 2000 election was the eye-opener, when it became clear that Republicans were much better prepared to wage a scorched-earth battle to prevail in any election dispute. In a plan masterminded by Trump's pal Roger Stone, the GOP had teams of lawyers ready to descend on Florida the moment they were called. Some of those lawyers are now on the Supreme Court — or are about to be rammed through a confirmation process, just in time for an election the president has already announced will require a vote in his favor. Again, this isn't coming from Donald Trump. His loose lips are giving away the game, but he's not the one who invented it.

For instance, is it even remotely reasonable to think that Trump came up with the idea to stack the Postal Service board with GOP donors, and install a crony to slow down the processing of mail in advance of an election we know will require record levels of mail-in voting? From Rutenberg's Times Magazine piece:

When Congress headed off for its summer recess with no deal on money for voting or the Postal Service, Trump told reporters. "They need that money in order to make the Post Office work, so it can take all of these millions and millions of ballots," he said. "Now, if we don't make a deal, that means they don't get the money. That means they can't have universal mail-in voting. They just can't have it."

He didn't think of that.

That particular scheme is this year's contribution to an ongoing, long-term plan to curtail Democratic voting. It is sophisticated and legally complex and its followers have fanned out to every state that may be close, with lawsuits and legal challenges ready to go after the election.

Right now, aside from throwing sand in the gears of the post office, they're going to great lengths in states all over the country to make it difficult to vote early or drop off mail-in ballots. They're filing lawsuits against states that want to count ballots that are mailed on or before Election Day but arrive later, a practice that's been in place for absentee ballots and military ballots for many years. On Thursday, Texas Gov. Greg Abbott abruptly ordered the removal of all but one early-voting drop box in each county. That includes Harris County, the home of Houston — an overwhelmingly Democratic city — which encompasses nearly 1,800 square miles and about 4.7 million people.

If Democrats decide they'd better take the risk and vote on Election Day instead, there are the possible "poll watchers" Trump has threatened to send forth. He could be provoking a disastrous situation all over the country with calls for his voters to storm polling places to "make sure" the voting is fair and their votes are counted, but he didn't invent this either. This particular form of voter intimidation has been practiced ever since Jim Crow. We even had a former chief justice of the Supreme Court who participated in it as a young lawyer in the 1960s.

In fact, Republicans were so aggressive about such tactics that courts issued consent decrees barring them from doing it in many jurisdictions for years. Those decrees have conveniently been recently lifted, under the same logic that the Roberts court gutted the Voting Rights Act. In that decision, the chief justice famously declared:

Our country has changed and while any racial discrimination in voting is too much, Congress must ensure that the legislation it passes to remedy that problem speaks to current conditions.

Rutenberg's story lays this entire history out in great detail and shows how it has accelerated during the Trump years. In fact, that's the real Operation Warp Speed.

So for all of our legitimate worries about Russian interference in our election, it turns out that the most dangerous assault on our democracy is a long-term Republican establishment operation led by a bunch of lawyers from elite schools. Trump is just the first candidate to come along who is corrupt and unpatriotic enough to unleash them completely.