A vote for the apocalypse

Fire and fury like the world has never seen 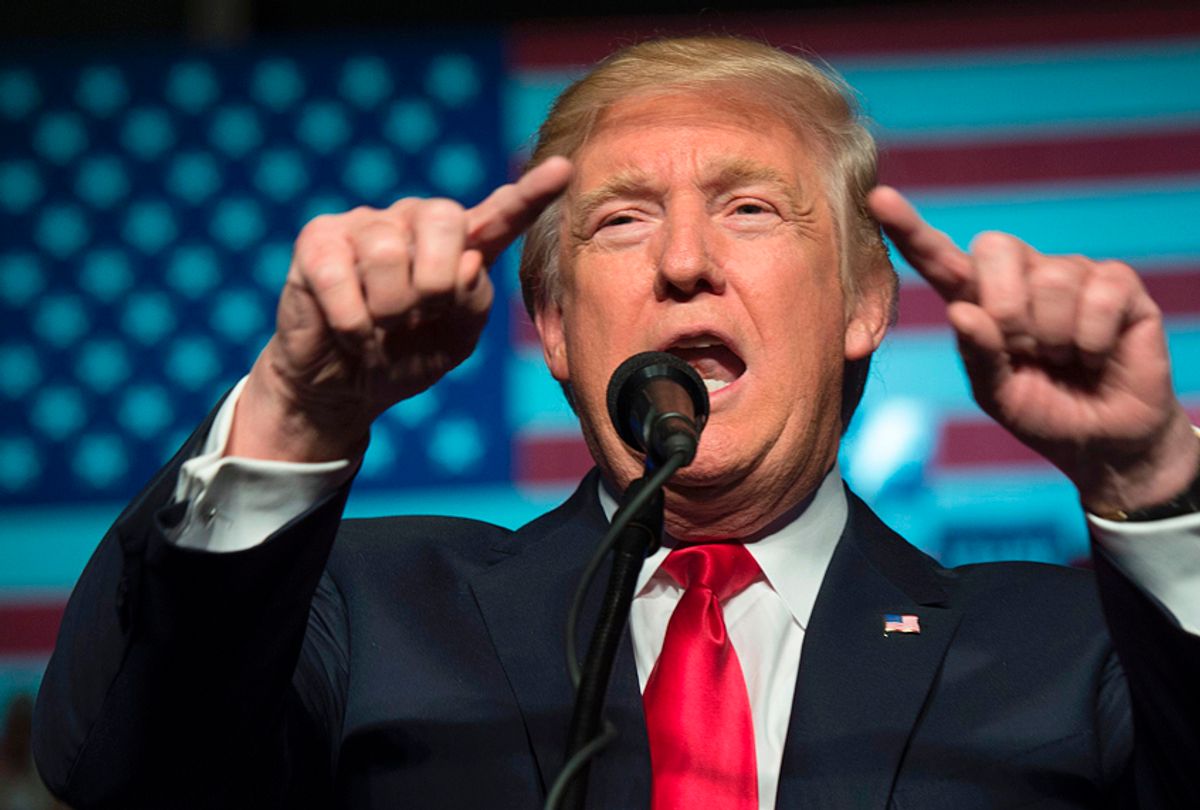 It was August 2017 and Donald Trump had not yet warmed up to Kim Jong-un, North Korea's portly dictator. In fact, in typical Trumpian fashion, he was pissed at the Korean leader and, no less typically, he lashed out verbally, threatening that country with a literal hell on Earth. As he put it, "They will be met with fire and fury like the world has never seen." And then, just to make his point more personally, he complained about Kim himself, "He has been very threatening beyond a normal state."

Only a year and a half later, our asteroidal president would, of course, say of that same man, "We fell in love." Still, that threat by an American leader to — it was obvious — launch a nuclear strike for the first time since Hiroshima and Nagasaki were nearly obliterated in August 1945 was memorable. The phrase would, in fact, become the title of a 2018 bestselling book, "Fire and Fury: Inside the Trump White House," by journalist Michael Wolff. Two years later, amid so many other threatening phrases from this president, "fire and fury" has, however, been left in history's dustbin, largely forgotten by the world.

"This is not an act of God"

Too bad, since it seems so much more relevant now that California, Oregon, and Washington, not to speak of a Southwest already officially in a "megadrought," have experienced the sort of apocalyptic fire and fury (and heat and smoke) that has turned daytime skies an eerie nighttime orange (or yellow or even purple, claims a friend of mine living in the San Francisco Bay Area). We're talking about a fire and fury that's forced cars to put on their headlights at noon; destroyed towns (leaving only armed right-wing militants behind amid the flames to await imagined Antifa looters); burned millions of acres of land, putting hundreds of thousands of Americans under evacuation orders; turned startling numbers of citizens into refugees under pandemic conditions; and crept toward suburbs and cities, imperiling the world as we've known it.

In the wake of the hottest summer on record in the Northern Hemisphere, we are, in other words, talking about the sort of apocalyptic conditions that the president undoubtedly had in mind for North Korea back in 2017, but not even faintly for the U. S. of A; we're talking, that is, about a burning season the likes of which no one in the West has ever seen before, a torching linked to the overheating of this planet thanks to the release of fossil-fuel-produced greenhouse gasses in ever greater quantities. In fact, as Washington Governor Jay Inslee pointed out recently, we shouldn't even be talking about "wildfires" anymore, but about "climate fires" whose intensity has already outpaced by years the predictions of most climate scientists. (Or, as Inslee put it, "This is not an act of God. This has happened because we have changed the climate of the state of Washington in dramatic ways.")

Significant hunks of the American West have now been transformed into the natural equivalent of furnaces, with fires even reaching the suburban edges of Portland, Oregon (which, for days, had the worst air quality of any major urban area on the planet), and promising a future in which cities will undoubtedly be swept up in such conflagrations, too. Admittedly, Donald Trump didn't threaten to launch "fire and fury like the world has never seen" against Portland (though he did send federal agents there to snatch peaceful protesters off its streets and continues to insult and threaten that city's mayor). If anything, as the fires scorched those states to a crisp, he did his best to avoid the subject of the burning West, as in these years more generally he's largely treated climate change (that "hoax") like... well, a pandemic that should be ignored while America stayed "open."

And it's not a subject he's been grilled on much either, not until recently when Western governors began laying into him over his stance on climate change. To offer just one example, as far as I can tell, Bob Woodward, the Washington Post editor and court chroniclerof presidents who, for months, had unparalleled access to Trump and grilled him on so many subjects, never bothered to ask him about the most important, most dystopian, most apocalyptic future Americans face. And mainstream Democrats didn't do much better on the subject while those fires were building to a crescendo until Joe Biden finally called the president a "climate arsonist." He added, aptly enough, "If you give a climate arsonist four more years in the White House, why would anyone be surprised if we have more of America ablaze?"

There's no question that, at the beck and call of the fossil-fuel industry, Donald Trump and his demonic crew have worked without qualms or remorse to ensure that this would be a fiery and furious America. Freeing that industry of restrictions of every sort, withdrawing from the Paris climate accord, openingup yet more areas for oil drilling, wiping out environmental safeguards, and even (at the very moment when the West was burning) appointing a climate-science denier to a top position at the National Oceanic and Atmospheric Administration, the president and his crew proved themselves to be pyromaniacs of the first order.

Of course, the heating of this planet has been intensifying for decades now. (Don't forget, for instance, that Barack Obama presided over a U.S. fracking boom that left people referring to us as "Saudi America.") Still, this president and his top officials have put remarkable energy (so to speak) into releasing yet more carbon dioxide and methane into the atmosphere. And here's the strange thing: they made it deep into the present apocalyptic moment in the West without — Greta Thunberg and climate change protesters aside — being held faintly accountable for their urge to fuel the greatest danger humanity faces other than nuclear weapons. In fact, as is increasingly obvious from the torching of the West, what we're beginning to experience is a slow-motion version of the nuclear apocalypse that Trump once threatened to loose on North Korea.

In an all-too-literal fashion, The Donald is indeed proving to be history's "fire and fury" president.

And don't for a moment think that there was no warning about the over-the-top burning now underway in this country. After all, in 2019, parts of Australia were singed to a crisp in a way never before seen, killing at least 25 humans and possibly more than a billion animals. And that country, too, was headed by a climate-change denier, a man who once brought a piece of coal to parliament and handed it around while soothingly telling other legislators, "Don't be afraid, don't be scared." In addition, in recent years, the Arctic (of all places) has been smoking and burning in an unprecedented fashion, heating its permafrost and releasingstaggering amounts of greenhouse gases into the atmosphere. Oh, and this June, the temperature in a small town in Siberia crossed the 100-degree mark for the first time.

By the way, Russia, too, is run by a leader who until recently was a climate denier. I mean, what is it about the urge of so many of us in such a crisis to support those dedicated to quite literally destroying this planet as a livable place for... well, us? (Hey there, Jair Bolsonaro!)

Our very own firenado

An almost unimaginable near-half-century ago on a different planet, I lived in San Francisco. I can still remember the fog rolling in daily, even during summer in one of the coolest, breeziest cities around. Not this year, though. On September 6th, for instance, the temperature there broke 100 degrees, "crushing" the previous record for that day. In Berkeley, across the Bay, where I also once lived long, long ago, it hit 110. As a heat wave swept the state (and the West), temperatures near Los Angeles soared to a record-breaking 121 degrees (almost challenging overheated Baghdad, Iraq, this year), while reaching 130 degrees in the aptly named Death Valley — and that's just to start down a list of soaring temperatures across the West from the Canadian to the Mexican borders.

As those fires filled the skies with smoke and ash, turning day into the eeriest of nights, a smoke cloud the likes of which had never before been seen appeared over the coastal West. Meanwhile, firenadoes were spotted and the ash-filled air threatened terrible things for health. As has been true for the last 46 years, I'm thousands of miles away from my old Bay Area haunts. Still, I regularly check in with friends and TomDispatch authors on that coast, some aged like me and locked in their homes lest the smoke and ash, the air from hell, do them in. Meanwhile, their cars are packed to go, their evacuation checklists ready.

My heart goes out to them and, really, to all of us (and, above all, to those to whom we oldsters will be leaving such a blazing, tumultuous world).

Sadly, among the endless scandals and horrors of the Trump era, the greatest one by far scandalized all too few for all too long among those who officially matter on this beleaguered planet of ours.  Even in 2016, it should have been obvious enough that a vote for Donald Trump was a vote for the apocalypse. Give him credit, though. He made no secret of that fact or that his presidency would be a fossil-fueled nightmare. It was obvious even then that he, not climate change, was the "hoax" and that this planet would suffer in unique ways from his (ad)ministrations.

And in every way imaginable, Donald Trump delivered as promised. He's been uniquely fiery and furious. In his own fashion, he's also been a man of his word. He's already brought "fire and fury" to this country in so many ways and, if he has anything to say about it, he's just gotten started.

Since he is, in his own fashion, a parody of everything: a politician, a Republican, an autocrat, even a human being, he sums up in some extreme (if eerily satiric) fashion human efforts to destroy our way of life in these years. In truth, fiery and furiously fueled, he's a historic cloud of smoke and ash over us all.

By his very nature, to use those 2017 nuclear words of his, he is "threatening beyond a normal state." Think of him as the president from hell and here I mean a literal hell. Four more years of him, his crew, and the fossil-fuelized criminals running the major oil, gas, and coal companies who are riding his coattails into profit heaven and planetary misery are the cast of a play, both comedy and tragedy, that none of us should have to sit through. He's our very own firenado and — it's not complicated — four more years of him will consign us to a hell on Earth of a sort still only faintly imaginable today.