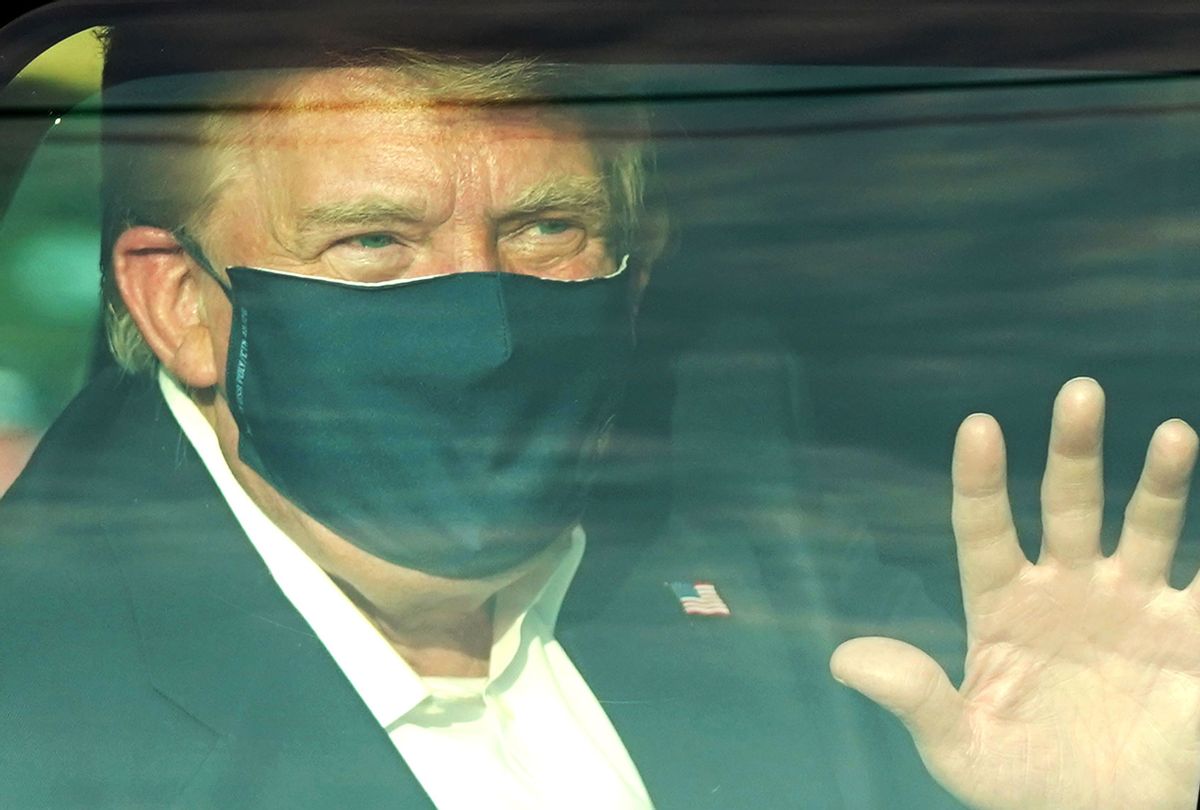 On President Trump's third day in the hospital where he was being treated for COVID-19, the president left the hospital in a motorcade to drive around the block waving at well-wishers before returning. The publicity stunt, which disregarded federal safety guidelines for close contact between infected persons and others, has alarmed doctors, public health experts and Secret Service agents.

According to the Centers for Disease and Control (CDC), a person who contracts COVID-19 can safely be around others again only when they've met three specific criteria: First, when it has been ten days since symptoms first appeared for the infected person. Second, when 24 hours has elapsed with no fever (without the use of fever-reducing medications). And third, when other symptoms are improving.

Considering the public information issued to the public by White House physician Sean Conley, Trump doesn't meet any of the aforementioned criteria. Trump was diagnosed with COVID-19 on Thursday, according to his spokespeople.

Likewise, some doctors were horrified at the prospect that Trump would expose his security detail to coronavirus, a risk made higher by the physical properties of the presidential vehicle fleet. James Phillips, an attending physician at Walter Reed, tweeted, "That Presidential SUV is not only bulletproof, but hermetically sealed against chemical attack. The risk of COVID19 transmission inside is as high as it gets outside of medical procedures. The irresponsibility is astounding. My thoughts are with the Secret Service forced to play."

Phillips added on Twitter: "Every single person in the vehicle during that completely unnecessary Presidential "drive-by" just now has to be quarantined for 14 days. They might get sick. They may die. For political theater. Commanded by Trump to put their lives at risk for theater. This is insanity."

During the drive-by, Trump sat in the back of the vehicle wearing a black cloth mask. There were at least two Secret Service agents in the vehicle. Both seemed to be wearing N95 masks, which can be an effective barrier against the coronavirus, but they aren't an absolute guarantee — especially in close quarters with an infected person.

Judd Deere, a White House spokesman, said in an email to the New York Times that "appropriate precautions were taken in the execution of this movement to protect the President and all those supporting it, including PPE [personal protective equipment]."

Deere said the drive-by was "cleared" by the medical team. However, after the parade, CNN reported that there were escalating concerns in the Secret Service. As they reported:

"That should never have happened," one current Secret Service agent who works on the presidential and first family detail said after Trump's drive-by, adding that those agents who went along for the ride would now be required to quarantine.

'I mean, I wouldn't want to be around them,' the agent said, expressing a view that multiple people at the Secret Service also voiced in the wake of Sunday's appearance. 'The frustration with how we're treated when it comes to decisions on this illness goes back before this though. We're not disposable.'

Another veteran Secret Service agent also expressed deep dismay at the Walter Reed ride, though was sympathetic for those around the President given the difficulty in pushing back on the commander-in-chief.

A third agent told CNN that Trump's stunt was "reckless."

On Monday, Trump criticized the media on Twitter for reporting on the backlash to his motorcade.

"It is reported that the Media is upset because I got into a secure vehicle to say thank you to the many fans and supporters who were standing outside of the hospital for many hours, and even days, to pay their respect to their President," Trump tweeted. "If I didn't do it, Media would say RUDE!!!"

After the tweet, Trump announced he will be discharged from the hospital on Monday. In his message, he continued to downplay the virus that has killed over 200,000 Americans.

However, as doctors explained to Salon, the treatment Trump received in the hospital is not what all Americans would receive if they tested positive for COVID-19.

"The therapies that President Trump is getting are available to many patients with COVID-19, [but] there are two issues," Dr. Georges Benjamin, executive director of the American Public Health Association, told Salon by email. "The first is VIP medicine where there is the risk of over-treatment or under-treatment because of who he is and not his clinical condition. We don't know the extent of this either way because they have not been as transparent with his clinical status."

"The second issue is the fact that he has universal access to all the care he needs from the military health care system, which in fact has all the attributes of a single payer health system: a form of health care funding and delivery he has politically opposed," Benjamin added. "Most Americans do not have access to that kind of care at one of the best hospitals in the world. Access to any test he needs, and any medication, without a concern for costs."