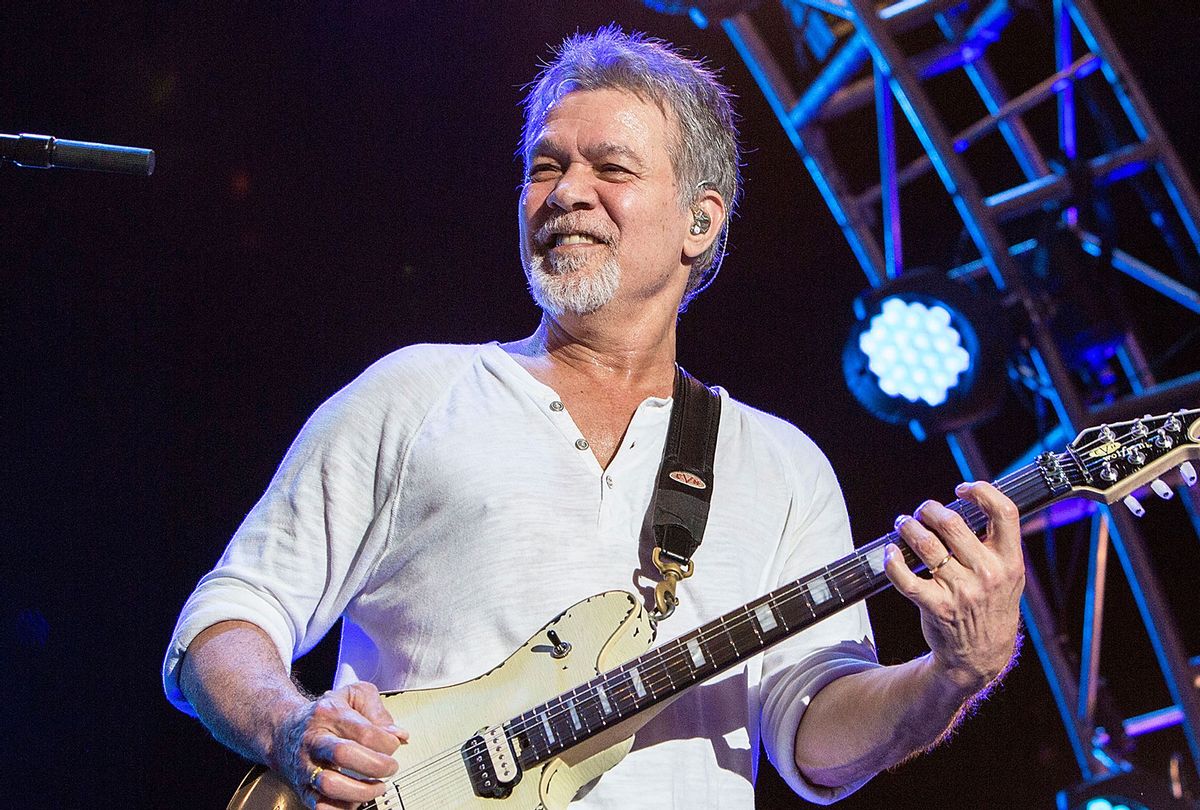 Eddie Van Halen, whose innovative and explosive guitar playing kept the hard rock band that bore his family name cemented to the top of the album charts for two decades, died on Tuesday morning after a long battle with cancer, a rep confirmed to Variety. He was 65.

Born in the Netherlands and raised in Pasadena, he founded Van Halen with his older brother, drummer Alex; the siblings were joined by vocalist David Lee Roth and bassist Michael Anthony in the first recording lineup of the group, which exploded after star-making gigs at such West Hollywood clubs as Gazzarri's and the Starwood.

It was instantly apparent from "Eruption," the solo showcase on Van Halen's self-titled 1978 debut album for Warner Bros., that Eddie Van Halen was an instrumentalist to be reckoned with. In a mere one minute and 42 seconds, the axe man detonated a dazzling display of fretboard tapping, ringing harmonics, lightning-fast licks and smeared, dive-bombing effects.

Writing about that recording in Rolling Stone's 2015 poll of the 100 greatest guitarists – in which Van Halen placed eighth, between Duane Allman and Chuck
Berry – Mike McCready of Pearl Jam wrote, "It sounded like it came from another planet…[I]t was glorious, like hearing Mozart for the first time."

Acting as the band's musical director and co-authoring the band's tough-riffing songs, which straddled the boundary between hard rock and heavy metal, Eddie Van Halen found immediate success, and formulated a style that would be emulated by hordes of long-haired rockers.

The group's first LP "Van Halen," though it climbed no higher than No. 19 in the U.S., would ultimately be certified for sales of 10 million copies. Its next five multi- platinum albums all reached the top 10; "1984," released in its titular year, contained the band's first and only No. 1 single, the synthesizer-driven "Jump," and sifted another 10 million units.

Ongoing conflict between the guitarist and the antic front man Roth – who reportedly took exception to Van Halen's extracurricular work, which included jaw-dropping lead guitar chores on Michael Jackson's ubiquitous 1983 single "Beat It" — led the singer to split with the act after its elaborate and wildly successful 1984 tour.

Such a defection would likely have split a less popular band, but Van Halenfound even greater sales after ex-Montrose vocalist Sammy Hagar replaced Roth. Between 1986 and 1995, the group released four consecutive No. 1 albums.

However, Hagar ankled Van Halen after a tiff about the group's planned greatest hits package. Eddie Van Halen brokered a truce with former singer Roth long enough to complete a pair of new tracks with the vocalist for the 1996 collection, but after another wrangle, a planned reunion with the singer broke down, and Gary Cherone, vocalist for the Boston pop-metal unit Extreme, signed on for a single album, "Van Halen III" (1998), which tallied comparatively meager sales.

Eddie Van Halen was dogged by personal and health issues that would intermittently interfere with his work in music over the course of the next decade. A chronic joint problem, exacerbated by his reckless onstage style, forced him to undergo hip replacement surgery in 1999. The onset of cancer – likely the result of heavy smoking – led to the surgical removal of part of his tongue in 2000.

Read more from Variety: "The Batman" delayed to 2022, "Matrix 4" release moves up

The recording of three songs with Hagar for the two-disc compilation "The Best of Both Worlds" led to a lucrative 2004 reunion tour with Van Halen's second lead singer. However, the alliance proved to be temporary, and it marked the end of both Hagar's and bassist Anthony's association with the group (though they would serve as representatives at the band's 2007 Rock and Roll Hall of Fame induction, which the Van Halens and Roth declined to attend).

After years of false starts, Van Halen reconvened in 2007 with Roth as the front man and Wolfgang Van Halen, Eddie's 16-year-old son, replacing Anthony on bass. Though a tour grossed more than $90 million, it was plagued by rumors of inter-band strife.

Eddie Van Halen's escalating drug abuse and alcoholism hastened his 2007 divorce from TV actress Valerie Bertinelli, his wife of 16 years, after a protracted separation. He entered rehab in 2007, and was reportedly sober from 2008.

"I was an alcoholic, and I needed alcohol to function," he said in a 2015 interview with Chuck Klosterman. "I didn't drink to party. Alcohol and cocaine were private things to me. I would use them for work. The blow keeps you awake and the alcohol lowers your inhibitions. I'm sure there were musical things I would not have attempted were I not in that mental state."

A second tour fronted by Roth was launched on a more even keel in 2012, supporting an all-new album on Interscope, "A Different Kind of Truth," which vaulted to No. 2. However, Eddie's surgery for diverticulitis forced postponement of shows in Japan, which were among the first international dates since 1984.

Read more from Variety: "Teenage Bounty Hunters" canceled after one season at Netflix

Though whispers of further shows would swirl thereafter, Roth opined that "I think Van Halen's finished" in a September 2019 radio interview in Detroit, just weeks before news of Eddie Van Halen's treatment for throat cancer surfaced in the press.

Edward Lodewijk Van Halen was born Jan. 26, 1955, in Amsterdam. His father played the clarinet, saxophone, and piano, and both he and his brother Alex were schooled on the latter instrument from the age of six. They continued their studies after the family moved to Pasadena in 1962.

Though Eddie – who never mastered sight reading — would perform at classical piano recitals, he sought something contemporary and took up the drums, while Alex began playing guitar. The two teenage musicians would ultimately switch off their instruments; Eddie claimed Eric Clapton and Jimmy Page, the respective guitar stars of Cream and Led Zeppelin, as his principal inspirations.

After high school years spent in local party bands, the brothers founded a new quartet – which they unwittingly named Genesis, ignorant of the English group's existence – in 1972 with singer Roth, whose PA system they were renting for gigs, and bassist Mark Stone, who was replaced by Michael Anthony.

An attention-grabbing date at Gazzarri's on the Sunset Strip by the rechristened Van Halen led to a demo session with Gene Simmons of KISS, who in the end opted out on working further with the band. However, as bassist Anthony recalled at the group's Rock and Roll Hall of Fame induction, the act was signed after Warner Bros. chief executive Mo Ostin and producer Ted Templeman caught the band at a 1977 show at the Starwood.

In the wake of the extroverted Roth's exit and Hagar's arrival, some anticipated a downturn in Van Halen's popularity, but the new vocalist's flair for power balladry and Eddie Van Halen's still-puissant guitar attack thrust four albums to the sales pinnacle: "5150" (1986), "OU812" (1988), "For Unlawful Carnal Knowledge" (1991) and "Balance" (1995).

However, the band never found similar chemistry with Cherone, and Van Halen only witnessed renewed life when it regrouped with Hagar and Roth in the new millennium.

Eddie Van Halen is survived by his second wife, the band's former publicist Janie Liszewski, whom he married in 2009, and his son.