“I hope that cough isn't anything bad while you are waiting for your test to come back," host Martha MacCallum said 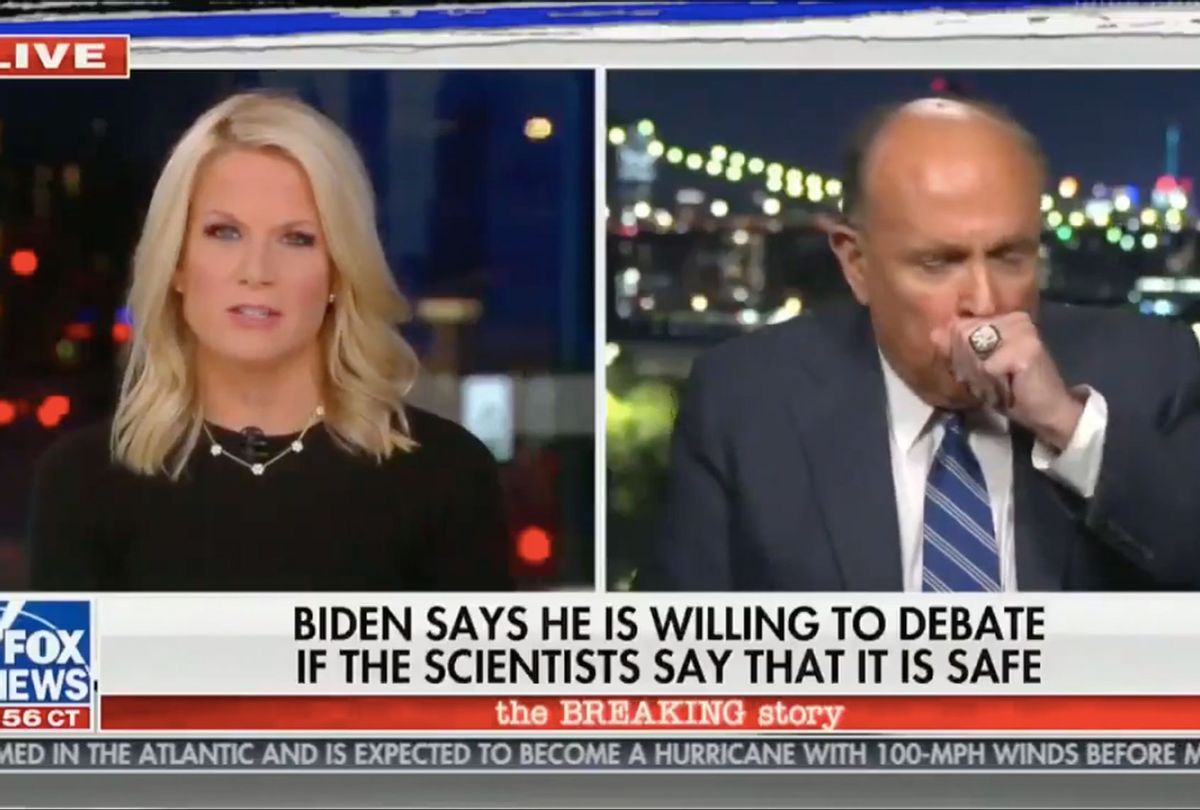 Giuliani told Fox News host Martha MacCallum that he was awaiting his test results after working in close contact with Trump and other advisers on the president's debate preparation team, who have since tested positive for COVID-19.

"I actually got one about two hours ago," Giuliani said, adding that his first test was negative. "I haven't gotten the results yet. I went to NYU. I got one of those all the way in the back of the nose tests."

He then went on to criticize Biden for telling Americans to follow the advice of scientific experts on the coronavirus.

"I would say to Joe that you don't really understand what scientists are," Giuliani said. "First of all, listen to your doctors. They know your personal history. Doctors really aren't scientists. Scientists almost always have competing opinions. That's what science is about."

Giuliani, who coughed throughout the interview, went on to slam Biden's mask advocacy.

"It isn't science to be wearing that mask, Joe, when you are giving a speech, and people are 30-40 feet away from you," he said. "The only thing you can infect is the teleprompter that's near you, so I see through you. That's a political statement to scare people — wearing that mask. You do not need that mask when you are standing at a podium."

MacCallum noted that Biden had not gotten sick, while Trump just spent a weekend at the hospital with COVID-19.

Giuliani said he had not gotten sick, even though he "doesn't wear masks as much" as he probably should.

After the interview, MacCallum expressed concern about the former New York mayor's cough.

"I hope that cough is not anything bad while you are waiting for your test to come back," she said. "We hope you will be healthy and well."

"I hope so, too," Giuliani exclaimed.

Giuliani told Salon's Roger Sollenberger after the interview that his test on Monday came back negative, and he had "no symptoms."

Giuliani said in another interview with ABC's "Good Morning America" that there was "no reason to delay" next week's town hall debate in spite of Trump's illness.

The next debate is scheduled for Oct. 15. Biden told reporters on Monday that he would be willing to participate, but added that "we should be very cautious."

"If scientists say that it's safe . . . then I think that's fine," he said. "I'll do whatever the experts say is appropriate for me to do."

Biden's campaign announced on Sunday that he had tested negative for the third time since facing Trump at last week's debate.

This week's vice presidential campaign between Vice President Mike Pence and Democratic nominee Kamala Harris is expected to feature a plexiglass barrier between the candidates.

Giuliani scoffed at any rule changes for the upcoming debates, particularly a reported change which would allow moderators to cut off candidates' microphones after Trump repeatedly interrupted Biden and moderator Chris Wallace of Fox News last week.

"I would not put in new rules for — you know, in the middle of the campaign," Giuliani said. "I would through us, or if they want to do it directly — I think maybe just remind both candidates, 'Stay within your two minutes. Don't interrupt.' I think they both understand what happened last time."

He claimed that the interrupting was part of Trump's "strategy" for the debate.

"It was his strategy to stay on top of [Biden]," he said. "I think we told the president, 'We don't want the story coming out that he dominated you.' And the president sure didn't let that story come out."

But polls found that voters in swing states did not view Trump's incessant interruptions as a win. About two-in-three voters in Florida and Pennsylvania said they disapproved of Trump's conduct at the debate, according to a New York Times/Siena poll, which found the race moving from a virtual tie to a solid Biden lead in the key swing states.

A CNN poll released on Tuesday following the debate and Trump's coronavirus diagnosis showed Biden leading nationally by 16 points, with 63% of voters saying Trump had handled the risk of infection irresponsibly.