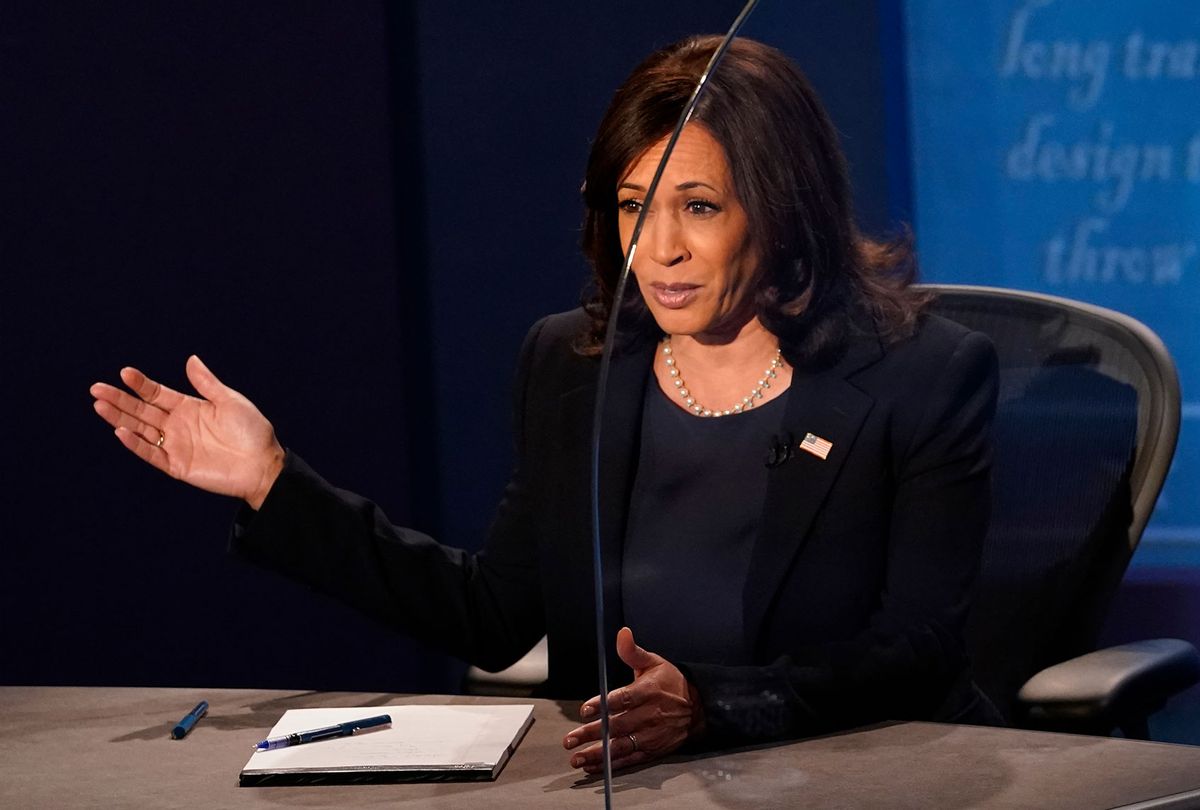 Democratic vice presidential nominee Sen. Kamala Harris (D-CA) debates U.S. Vice President Mike Pence at the University of Utah on October 7, 2020 in Salt Lake City, Utah. This is the only scheduled debate between the two before the general election on November 3. (Morry Gash-Pool/Getty Images)
--

Sen. Kamala Harris and Vice President Mike Pence's Wednesday night in the 2020 vice presidential debate featured far fewer fireworks — though plenty of conflict — than the previous debate featuring the candidates at the top of the ticket.

But while Pence wasn't as aggressive as President Donald Trump, who shouted and interrupted former Vice President Joe Biden constantly, he similarly abused the rules. He interrupted Harris multiple times, quite rudely, while she was far more deferential to the limitations. He also frequently spoke over his allotted time, leading him to speak over USA Today's Susan Page, the moderator. Overall, it wasn't a pretty picture for Pence, as he was consistently talking over women out of turn.

Harris performed reasonably well in standing up to Pence, frequently countering his lies and subverting his attempts to interrupt her. But she also passed by many opportunities to hit the vice president on the failures of the president and the administration that a more skilled debater might have taken advantage of.

Here are five standout moments from the debate:

The senator started out strong, attacking Pence and the administration on their failure of a response to the pandemic. She pointed out that the administration could and did know how bad the outbreak could be back in January but still took insufficient steps to fight it. Despite his attempts to dodge her attacks, Pence was never really able to provide a compelling explanation of why the administration's efforts should be seen as acceptable or adequate, let alone impressive, given the results.

Pence responded to Harris's attack by echoing many of the president's false and misleading claims about the pandemic. Most prominently, he falsely said Trump "suspended all travel from China" at the start of the outbreak. While Trump did place restrictions on the travel at the end of January, thousands of people were still able to make the journey to the United States and potentially bring virus. Clearly, the virus still made it to the U.S., and the administration was unprepared for its arrival. The vice president also attacked Biden, falsely, claiming Biden opposed the "ban," though there's no evidence he did so. Harris never corrected this misinformation, though.

Multiple times during the event, Harris effectively silenced Pence's interruptions with a calm but stern "Mr. Vice President, I'm speaking." It was extremely effective and put Pence on the defensive.

Harris was at her strongest when she was talking into the camera and attacking the administration's policies. Despite Trump and Pence's false claims to the contrary, she correctly pointed out that they're trying to strip health care and protections from millions of Americans. Since Democrats are more trusted on health care than Republicans, this was likely an effective line of attack.

5. Pence gets cut off

Page let Pence get away with far too much speaking out of turn, but eventually she clearly got frustrated and cut him off.

Bonus: A fly lands on Pence's head. And stays there.

The fact that this moment got so much attention might tell us a lot about how much (or more accurately, how little) effect the debate will likely have on the state of the race.