Just cancel the remaining debates: Pence and Harris were polite, but utterly useless

Trump says he won't do a virtual debate next week. Good, because Pence v. Harris was pointless and irritating 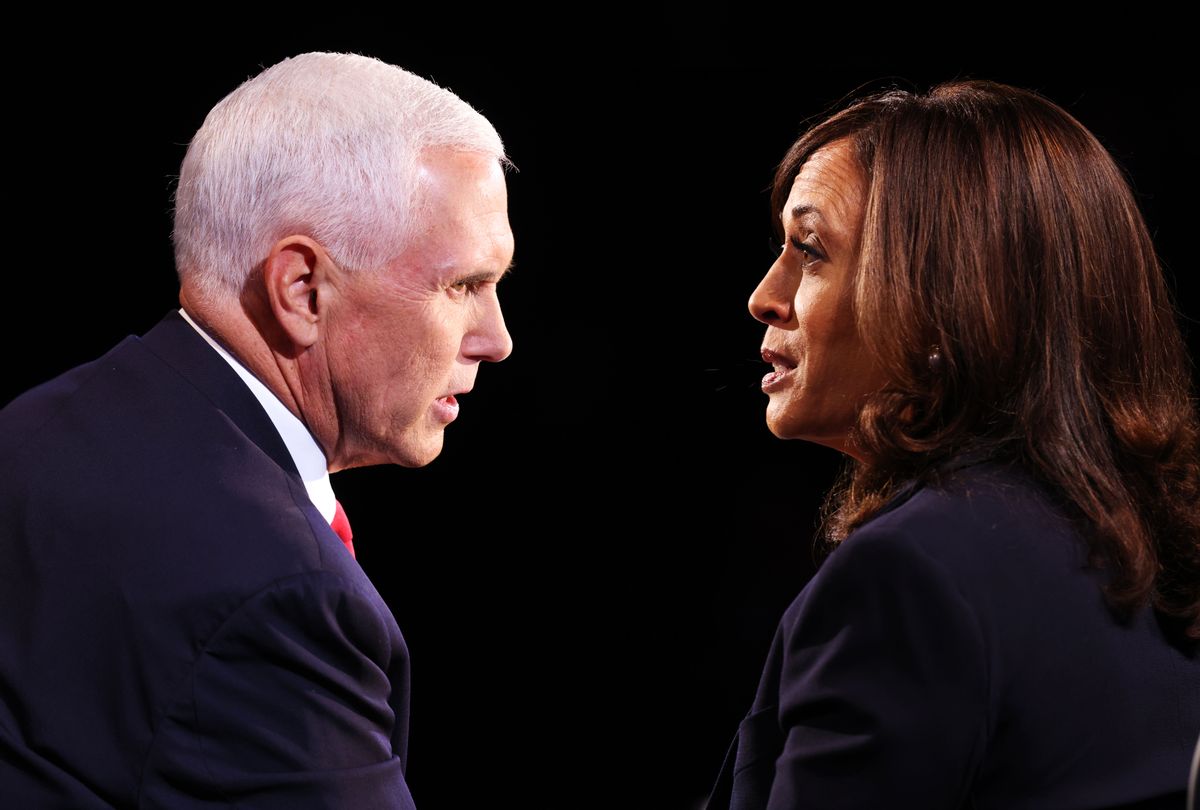 Wednesday night's debate between Vice President Mike Pence and Sen. Kamala Harris — the first and only vice presidential debate of this campaign — actually changed my mind about the 2020 election.

After last week's disastrous joke of a debate between former vice president Joe Biden and President Trump, I somehow remained onboard with holding the remaining debates as scheduled, if for no other reason than to allow Americans a sense of normalcy and order in what has otherwise been a chaotic and upending year.

Yeah, no. "Normal" is what landed us here. Trump's announcement on Thursday morning that he would not participate in next week's town-hall debate with Biden, after the debate commission announced plans to hold it remotely, may actually be a blessing. (If the president can be counted on not to change his mind, which of course he cannot.)

In the event, both "debates" to this point have been pathetic. No one actually answers questions, and the moderators have shown no will to actually moderate. More specifically, the matchup between Harris and Pence will be remembered for its historical first — with the first Black woman and first Asian-American on such a debate stage, embodied in the same person — but perhaps even more so because it should never have occurred.

As PressWatch and Salon columnist Dan Froomkin wrote ahead of Wednesday's debate, Pence's "very presence [was] an affront to public health guidance the rest of the country is supposed to be following." The vice president's reddened left eye didn't help buttress CDC Director Robert Redfeld's absurd claim that Pence couldn't be considered a "close contact" of President Trump, who confirmed he had tested positive for COVID-19 after his debate with Biden last week, giving Pence the all-clear to appear on the debate stage in Salt Lake City.

Top brass at the Pentagon are quarantining after at least two high-ranking military officers tested positive for the coronavirus in the past week. More people in Trump's orbit have tested positive in that time period than in all of Taiwan. Still, second lady Karen Pence insisted on appearing inside the debate hall maskless, and the vice president posed for pictures in definitively close contact with former Wisconsin governor Scott Walker — of course, without a mask.

Even though debate moderator Susan Page, USA Today's Washington bureau chief, opened on the topic of the coronavirus, the question was pointed first at Harris. When the question of whether the White House was being remotely honest about Trump's medical condition was posed to Pence, Page allowed him to filibuster and what-about his way out of an answer. Like the trained politician he is, Pence was able to adeptly weave most of his non-answers back to his push to confirm right-wing jurist Amy Coney Barrett to the Supreme Court. As a recent poll showed a 15-point margin in favor of confirming Barrett, the hard push seems to be working with voters, perhaps the only real bright spot for Republicans in recent political news.

Of course Pence lied — profusely. As with his boss, the vice president's penchant for untruths is a given. But Page, a frequent panelist on Fox News' "Special Report With Bret Baier," somehow did an even worse job at attempting to hold the candidates to account than Fox News' Chris Wallace did last week. She brought up foreign policy, only to ignore Afghanistan days after a sobering new report about children of U.S. service members replacing their parents on the battlefield.

Page brought up the possible or likely reversal of Roe v. Wade in a manner that allowed Pence to evade the answer, on the same day it was reported that the specialty drug cocktail Trump received as part of his COVID-19 regimen includes an antibody treatment first tested using cells derived from an abortion procedure, exactly the sort of stem-cell science Pence has attempted to shut down on the federal level. The issue of immigration was ignored and LGBTQ rights were never mentioned — the second time for a vice presidential debate featuring Pence, who as governor of Indiana signed anti-trans legislation into law.

For her part, Harris evaded the question of whether a potential Biden administration would "pack" the Supreme Court (that is, expand it) — and that provided the most promising moment for progressives of the whole night.

Even as she was obviously trying to walk a Biden-esque middle road on issues like tax hikes and fracking — Pence correctly observed that she opposed the latter during her own presidential campaign — Harris avoided the trap of unequivocally backing away from expanding the high court in response to Republicans' likely confirmation of Barrett. That question is a purely political ploy, staged by people who all gave straightforward answers on filling an election-year opening, and then unanimously broke their promises. After all, Republicans still haven't explained how they plan to provide Americans with health insurance if they succeed in repealing the Affordable Care Act. (How many times, exactly, as Trump promised a "great plan"?) The pseudo-issue of "court-packing" is simply a demand that Democrats give up their leverage. Harris correctly turned the question around to Mitch McConnell's brutal remaking of the federal courts by stuffing them with underqualified right-wing white men.

Otherwise this debate was worse than useless.

Harris was supposed to prosecute the case against Trump, but couldn't get a straight answer out of Pence. It was noteworthy that Pence was the only one who brought up impeachment.

The pair of running mates agreed on too much for my comfort, perhaps fueled by Pence's unctuous politeness. It reminded me how inhibited by their donors Democrats remain. Too often, Harris sold an upcoming Biden administration as Republican-lite.

On tax hikes, Harris reminded us that the Biden plan raises the rate to $400,000 from $250,000 under Obama. On fracking, Harris, who formerly supported the Green New Deal legislation authored by Rep. Alexandria Ocasio-Cortez, D-N.Y., and Sen. Ed Markey, D-Mass., was left to brag about the inadequacies of Biden's climate plan. While this is a function of Electoral College politics, the notion that you have to defend the environmentally devastating process of fracking to win Pennsylvania isn't backed by the most recent polling, or even by the general trend line. An August CBS/YouGov poll of Pennsylvanians found that a majority of voters now opposes fracking, and more recent polls in the Keystone State appear to show that opposition is growing.

If Trump's intransigence means the remaining debates are scrubbed, that will stand as one of his few positive accomplishments. At least that means no more people will be infected by the reckless president and his entourage.