Is Trump actually trying to sabotage his campaign? If so, he's doing a heckuva job

Trump's COVID diagnosis offered him an opportunity to shift the trajectory of this campaign. Oh boy, did he ever 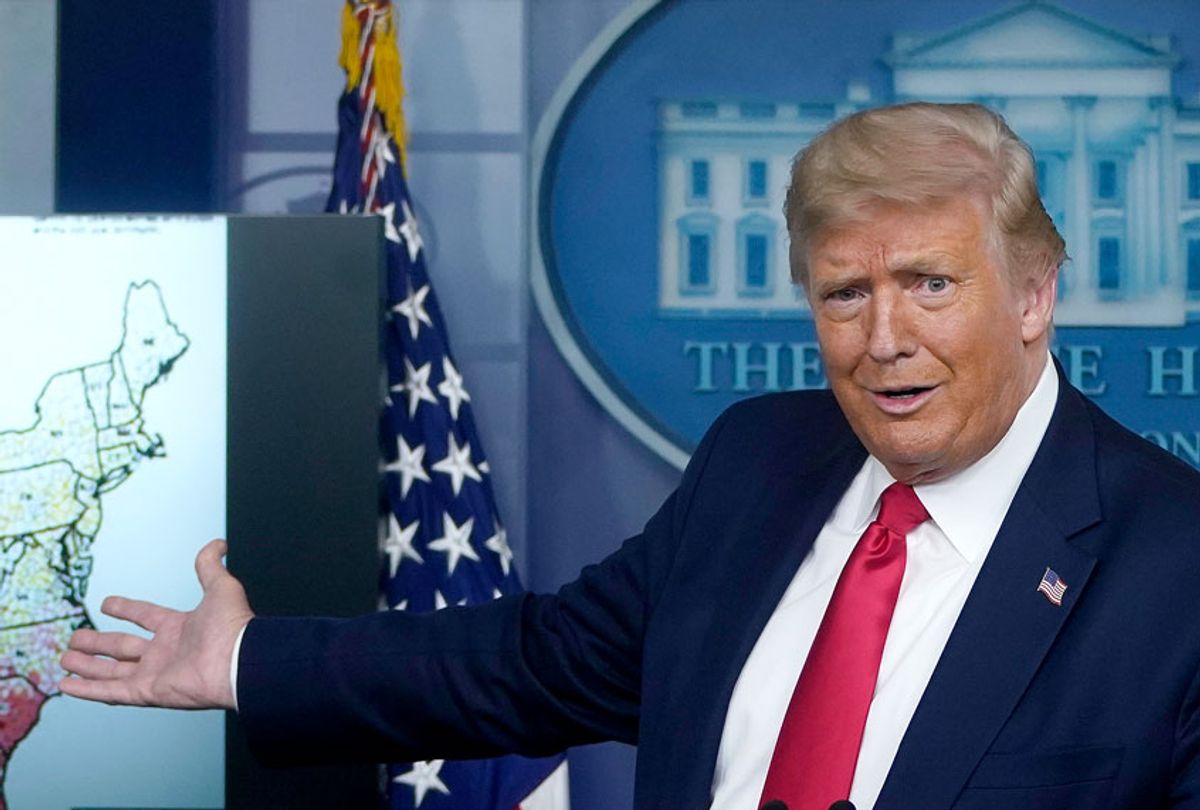 If you didn't know that President Trump was ill with COVID-19 and on some very strong drugs, or that even on a good day he tends to be impulsive and scatterbrained, you might think that he is trying to sabotage his re-election campaign. Some of his behavior the last few days has been downright self-destructive, so much so that it's likely whatever staffers are still ambulatory after the virus swept through the White House wish his doctors had gone a little easier on the steroids and left him in bed, worn out and achy. Trump's "proof of life" videos, the manic tweeting (even by his standards) and now the call-ins to his favorite Fox shows are downright surreal. But it's the decisions he's making that surely have them in despair.

The polling is brutal for Trump right now and he's beginning to look like an albatross around the necks of Republicans in tough down-ticket races. The averages have Trump losing nationally by nearly 10 points and the battleground states are all going the wrong way. He is naturally "downplaying" these numbers, insisting to his voters that the polls are all fake and he's actually leading across the board, but you could see the flop-sweat glistening under his makeup even before he developed a COVID fever.

Before Trump got sick, it seemed possible that he could keep the race close enough in certain swing states that Republican lawyers could challenge the vote count and find a way to squeak through with another Electoral College victory. It would be foolish to say that's impossible, but the way Trump has been behaving ever since his first debate with Joe Biden in Cleveland has made it less likely to succeed. That flamboyantly vulgar performance was just one of a flood of poor decisions by Trump and his campaign.

Most important of those, of course, was the decision to treat the global pandemic like a political problem — or simply an image problem — that could be solved with spin and PR, rather than a serious public health crisis. But however grotesque and mercenary those decisions may have been, you could see a twisted logic at work, indecent as it was. Trump's behavior in the last few days, on the other hand, has been politically suicidal.

First of all, there's the fact that Trump caught the coronavirus and saw it spread like wildfire through the White House and the Republican Party. That was a stunning rebuke to the administration's pandemic response that no amount of bravado can fix. Nothing could better illustrate the folly of his reckless disregard for the public health guidelines that most Americans are living with.

There is a price to pay for that. According to an ABC/Ipsos poll taken last weekend, 72 percent of adults agreed that the president did not take "the appropriate precautions when it came to his personal health" and "did not take the "risk of contracting the virus seriously enough." As a result, his diagnosis not only didn't bring him any sympathy, he actually lost support.

Still, one might have expected that he would see contracting the virus as an opportunity to shake up the race and try to woo back some voters who have rejected him. He might have done as British Prime Minister Boris Johnson did: Express some remorse for his previous attitude and exhort people to wear masks and practice social distancing.

It's absurd to think Trump would ever do such a thing, of course. He's incapable of anything like that. But I didn't actually expect him to sally forth with ridiculous pageantry, as in his Mussolini-esque triumphant return to the White House where he mounted the steps, ostentatiously ripped off his mask and saluted.

He could have used the moment to empathize with other victims and their families, and to try to turn the page on that odious debate performance. Instead he has repeatedly filmed bizarre videos in which he once again downplays the virus, plays up his pseudo-miraculous recovery and touts the experimental drug he took, implying that not only did he personally usher it into production but prescribed it for himself. These delirious messages, along with his exhortation that people not allow the virus to "dominate" their lives, have widely been received as unsympathetic to all those who have suffered and died — and also as obtuse about the state of America's medical care, which is nothing like the VIP treatment he received, and which he is trying to now trying to make dramatically worse.

He didn't stop there. Indeed, he seems unable to control himself. Apparently realizing that he's hemorrhaging support among older voters — who now seem to favor Biden by a wide margin — Trump put out another surreal video in which he said this:

Then he promised that all senior citizens would be getting his miracle cure. Now Trump is reportedly working on a "legally dubious" $8 billion plan to give seniors a $200 "gift certificate" for drugs, which is such a harebrained scheme it sounds like something he came up with when his fever was spiking. (He first tried to get drug companies to do it and they balked. Now he's literally trying to steal money from the Medicare trust fund to benefit his re-election.)

Along with all this, Trump impulsively announced his administration would end negotiations on a new coronavirus relief bill, only to backpedal after someone reminded him that he could once again send out checks to million of people with his name on them. It's possible some new legislative package can be thrown together before the election, but Trump's confused meddling has probably erased any possible political benefit for him.

Flying in the face of his own PR campaign to be seen as a Man of Steel who is afraid of nothing, on Thursday he refused to acquiesce to the debate commission's requirement that next week's scheduled town-hall debate with Biden be held virtually. Pete Buttigieg handily dispatched his whining:

Once again Trump had to reverse course after someone in his campaign, no doubt, gently suggested that he might want to debate since they are behind by 10 points! The Trump campaign suggested rescheduling the event but so far the Biden camp is having none of it. Another opportunity to shift the race, assuming that's even possible, squandered.

And he's been calling into Fox shows and sounding very confused, even for him. On Thursday morning he appeared on Fox Business and produced this gibberish:

Later that night he called in to Sean Hannity's show and it was just as weird:

Trump said in one of his videos this week that getting COVID was a blessing from God. He meant it in some "I am Jesus, here to save the world" sort of way that didn't make sense, but he wasn't entirely wrong. He was offered an opportunity to change the trajectory of a campaign that was rapidly going south for him. He could have tried to milk his illness for sympathy and at least fake some compassion for the millions of other people who have suffered. But that's just not in him. Instead, he's used it to double down on everything the majority of Americans have come to loathe about him. Of course he did. It's all he knows how to do.