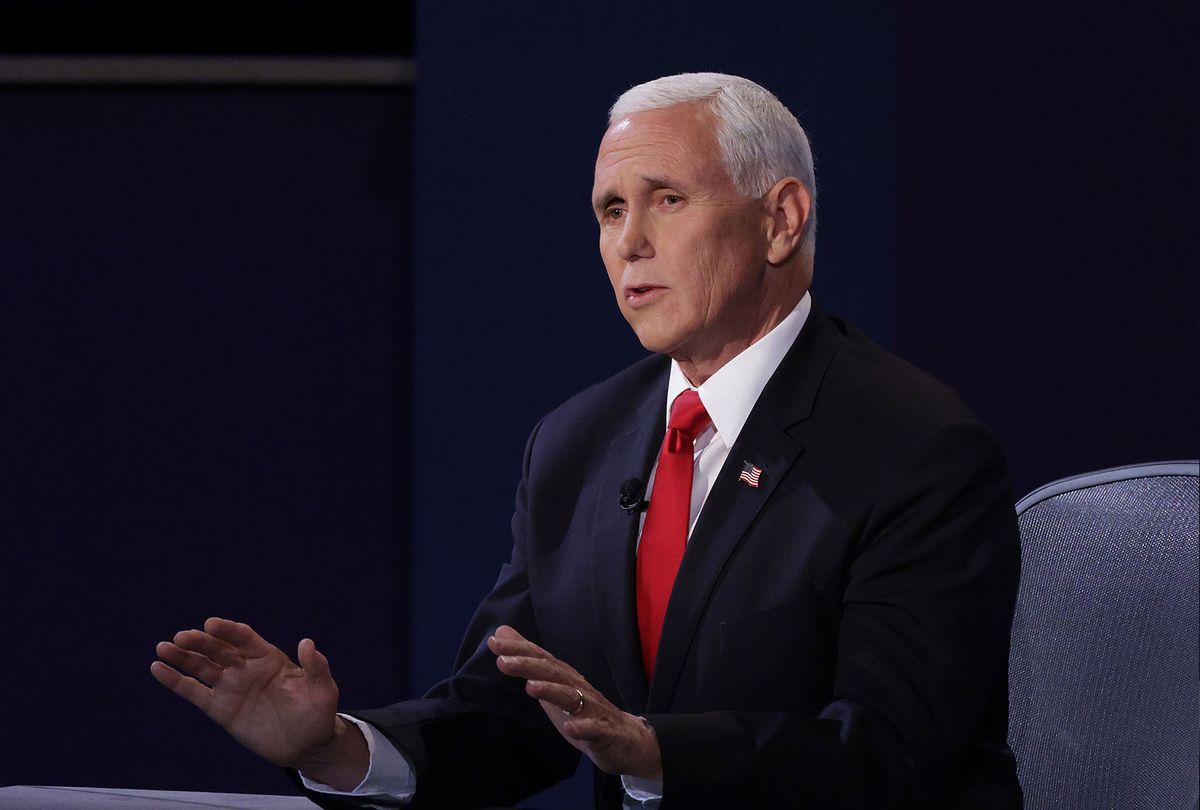 "It is a privilege to share the stage with you Senator Harris," said Vice President Mike Pence, and those 11 words signaled a new strategy. It was a turn-on-a-dime maneuver from President Trump's disastrous September 29 debate that tanked his polls. If Trump was a rabid blowhard, Pence would be calm and respectful. Implicit in the serene composure was a decision; he was not there to save Trump's presidency but to audition for his own.

Wednesday's vice-presidential debate in Salt Lake City showed two politicians who are a heartbeat away from the presidency. If Trump's health worsens from his COVID-19 illness, or he dies, then Pence assumes the Oval Office. If Trump loses the election, Pence becomes an already seasoned contender for 2024.

Despite the normalcy of his demeanor, Pence could pose an even greater threat to civil and human rights than Trump. His tranquil voice and Christian piety conceal an extreme fundamentalist agenda. He seeks to unleash brutal policies against women and LGBTQ people, and to dismantle the separation of church and state, threatening the rights of those who don't believe in the God whose banner he claims to operate under.

How did Pence even get on that stage? Years ago, Trump crisscrossed the nation and lit the latent jingoism and racism into rallies that were bonfires of hate. Trump sold "The Wall" as both a real wall on the U.S.-Mexican Border but also as a metaphor to stop diversity from changing the nation.

It worked. He had billionaires. He had whites without a college degree. He had racists. He had sexists. But he needed the Evangelicals.

The Evangelical vote is vital for Republicans to win. In 2016, there were 231 million Americans eligible to vote. Trump got 62 million and Hillary Clinton 65 million. Tallied up, that is roughly only 60 percent of the electorate. One out every four voters is Evangelical, which adds up to almost the same size voting bloc as people of color from all religions. Alongside free marketers, the "alt-right," Tea Partiers and Libertarians, Evangelicals are a needed part of the Conservative Coalition.

Republicans faced a problem: How to turn a man who divorced multiple wives, cheated with adult film stars and whose daughter laughed when he was called a "sex predator" on "The Howard Stern Show" into an acceptable vehicle for God's will on Earth.

Enter Indiana Gov. Mike Pence. According to a Politico report, Trump campaign chair Paul Manafort and Republican National Committee Chair Reince Priebus pulled for Pence because he would get out the Bible thumpers. When Trump landed in Indiana, the local Republican Party Chair Jeff Cardwell told him, "Mike Pence will deliver the Evangelical vote, he will deliver the Rust Belt."

Trump's choice of Pence locked in the Christian vote. In order to justify support for an obviously profane man, the Evangelical media reimagined Trump as a flawed vehicle for God's will, comparing him to the biblical figure of King Cyrus, whom Evangelical leader Mike Evans has described as "an imperfect vessel" and "flawed human being" who "was used as an instrument of God for deliverance in the Bible." He would save them from the growing power of secular America, where comedians from George Carlin to Bill Burr routinely roasted the church. Trump would pantomime anti-abortion values by signing the Born Alive Executive Order. Meanwhile, some Evangelicals look at his backing of the right-wing Israeli government and hope he catalyzes the Second Coming in which Christ returns to carry away the righteous as the rest of us burn in Hell.

Pence presided over Trump's "rebirth" as the standard bearer for the right-wing Christian movement. Now as the president's campaign for reelection implodes, Pence can position himself as the natural successor to lead Trump's coalition. It would be easy. The deep hatred of difference that drove Trump to the White House also drives many Evangelicals.

Every step of the way, Pence stood behind Trump and employed his trademark piety to mask a ruthlessly anti-egalitarian ideology. It is harder to see behind his tranquil voice and showy courtesy. Peek behind the mask and a terrifying history opens to view.

Pence has pushed pro-corporate, homophobic, anti-immigrant, pro-war, pro-drug war policies again and again. Those are the facts. He was against raising the minimum wage, saying it would "hurt the working poor." He opposed LGBTQ military service and gay marriage, saying, "societal collapse was always brought about following … the deterioration of marriage and family." He supported the Iraq War. He wanted to keep draconian penalties for marijuana and opposed its legalization. He admits climate change is real but offers no solution to the existential threat to humanity. In short, Pence is like a nightmare version of Oprah, but instead of everyone getting a car, it's as if Pence is gleefully shouting, "And you get a Hell! And you get a Hell! And you too!"

With Trump's approval ratings sliding, the Republican Party is surely shopping around for a new leader. After the 24-hour wall-to-wall circus of the Trump administration, it will likely enlist a more coherent and made-for-TV personality like Pence or even Tucker Carlson.

Right-wing media and political networks are a conveyor belt carrying mediocre men into the halls of power. Empowered by a now solidly conservative Supreme Court — where Judge Amy Coney Barrett is being rushed to confirmation — and a Senate and Electoral College that is a red state firewall against the younger, more diverse Democratic-leaning majority, the Republican Party may slowly seek to transform the U.S. into an episode of The Handmaid's Tale.

In the coming years, whether or not Trump is re-elected, we may see Roe v. Wade or the gay marriage decision be overturned in the Supreme Court. The suffering that could be visited upon women and the LGBTQ community in the name of religion would be devastating. It is a future Pence is working to bring about.

Rep. Alexandria Ocasio-Cortez tweeted in 2019 that "removing Trump will not remove the infrastructure of an entire party that embraced him; the dark money that funded him; the online radicalization that drummed his army; nor the racism he amplified+reanimated."

She is right. Trumpism is here to stay. The only difference if Mike Pence takes over now, or makes a run for the White House in 2024, is that the bigotry will wear a prayerful mask.