My sister died needlessly of COVID-19 — and bias

Despite our pleadings, my older sister Dr. Julie Butler could not access timely care. It didn't have to go this way 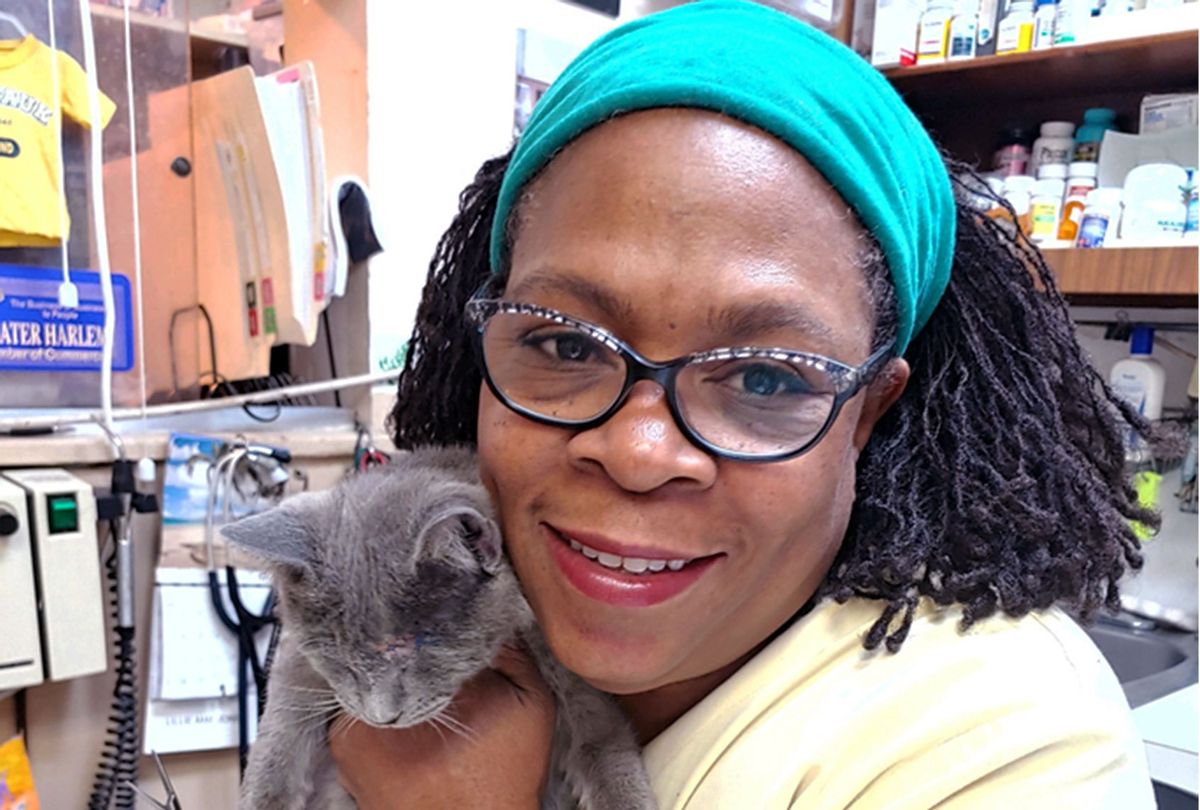 Dr. Julie Butler, who passed away in April 2020 of complications due to COVID-19. (Photo courtesy of Dr. Sheila Butler)
--

As I write this, over 210,000 Americans have died from COVID-19. My sister is one of them. But it wasn't just the coronavirus that killed her. It was also racism.

Julie Butler graduated from Wellesley College in 1979 — one of the few Black women in the class — with a double major in molecular biology and studio art. She went on to become a veterinarian, and practiced her calling in Harlem, New York, the community she lived in for more than 30 years and to which she contributed as a community leader and board member for several organizations. She was a wife, a mother, and my best friend.

As a solo veterinarian, Julie logged long days in the clinic, seeing patients until 7 p.m. and completing charts after that. Her patients were dogs, cats, turtles, snakes, lizards, rabbits, birds, and more. She was Harlem's Steve Irwin.

In early March one of Julie's assistants came to work with a cough and high fever. My sister promptly sent him to the emergency room. Later that week, a client who had recently returned from London came into the clinic with a fever to pick up his dog. And as the week ended, a close family friend tested positive for COVID-19. A few days later, my sister began feeling so sick she couldn't go to work. It started with fatigue, fever, and general malaise. Her temperatures spiked at 103.5 degrees.

Julie's daughter reached out to me, her physician aunt, for advice. I told her to get my sister tested for COVID-19 immediately. She contacted her mother's primary care provider, who said she would not see my sister or order testing or prescribe medication for her.

With no medical care option, my sister's husband, children, and my son, who worked for Julie as a veterinary assistant, provided round-the-clock home care, taking shifts to attend to her needs. These family members remained in constant contact with me and the other physicians in our family, including our brother and his wife, both family practitioners in California.

As Julie suffered in her sick bed, the Surgeon General of the United States and the federal Centers for Disease Control and Prevention told Americans what to do if we suspected we had COVID-19: Stay at home, they told us. Do not go to the emergency room or urgent care center. Call your doctor for advice.

That advice was problematic for many people of color who do not have family doctors or health insurance. They are overly reliant on urgent care centers and emergency rooms for their acute medical needs. My sister and our family followed the advice of the Surgeon General and the CDC as the definitive directive in a rapidly expanding pandemic. But calling Julie's primary care provider had not resulted in any meaningful advice or intervention.

The New York State Department of Health provided a hotline for getting COVID-19 information, advice, and intervention, including testing availability. We called the hotline on Julie's behalf. But even though her symptoms of unrelenting fever, headache, body aches, chills, nausea, diarrhea, and nonproductive cough had already been going on for a week, we were told to call back in three days if they persisted. We tried three different times over the course of a week and received the same response.

Days later, Julie's temperature hovered near 104 degrees despite tepid baths and round-the-clock Tylenol. Yet we could not get her tested for COVID-19. It made me angry to see my sister denied testing and treatment when I saw white friends, colleagues, and acquaintances get one or both almost immediately upon showing symptoms. But what was happening to Julie was happening all across New York City.

Julie was eventually tested for COVID-19, but here's what it took to make that happen: I recommended that Julie's family take her to a local urgent care center for a chest x-ray and additional evaluation. But this was not going to be an impromptu visit. The clinic had on-site radiology, the wait time was less than 10 minutes, and there was no one in the waiting room. I gave the green light to Julie and her family.

Julie arrived at this urgent care center at 6 p.m. on Monday, March 23rd. She was evaluated, and her chest x-ray showed both lungs were full of fluid and inflammatory cells. I spoke to the attending physician, who recommended immediate transport and admission to the hospital. The closest hospital, however, had a reputation of providing suboptimal care, especially to people of color. I asked the attending, "If she were your sister where would you want her to go?" The physician paused, then recommended taking Julie to a hospital in a more affluent, white community as her best chance of survival. I paid for a private ambulance to transport my sister to this hospital. She was evaluated in the emergency room, given a presumptive diagnosis of COVID-19 pneumonia, and then admitted. Her COVID-19 test came back positive a few days later.

Within 24 hours after the diagnosis, Julie was transferred to the intensive care unit and intubated. She received several medications, including hydroxychloroquine. The family held daily meetings by telephone with the medical staff taking care of Julie. We rejoiced as her fever gradually subsided and she was able to come off the ventilator, though she still needed supplemental oxygen to maintain her oxygen saturation. Finally, she was again able to breathe just room air.

I FaceTimed with Julie the morning she was discharged from the hospital. She appeared weak but in good spirits that day. She told me she was able to walk to the bathroom on her own and was even eating a little. We were hopeful. She also told me that she was experiencing severe back pain but the doctors and nurses in the stepdown unit where she was now a patient told her that this back pain was due to having been in bed too long.

She told me that she had developed a blood clot in her right leg. With the daily updates we received during Julie's ICU stay, I was puzzled that no one had mentioned the clot. I asked her whether she was being treated for it and she told me yes.

My sister added, "They think I am well enough to go home."

When Julie arrived home, she was still weak but optimistic. She was given a sponge bath in the dining room, since she was too feeble to climb the stairs. Shortly after her bath, Julie grew short of breath and quickly became unresponsive. The family called 911 and my son performed CPR on his aunt as she was in full blown respiratory arrest. Her oxygenation never went above 61 percent, despite supplemental oxygen. My niece tells me that the EMT tried to resuscitate her for a few minutes before pronouncing her dead just after 10 p.m., on April 4, 2020.

"They did not treat her right," my niece told me afterward. "They were reluctant to touch her and after briefly working on her, they pronounced her dead, mumbled condolences, and left."

The family, still shaken, was left to figure out what to do with Julie's body. They called the police and were told to call the hospital. They called the hospital and were told to call the police. After several hours of calls, Julie's body was transported to the morgue. A small funeral service was held days later for my only sister and best friend. I was only able to attend virtually.

Following her death, members of her household experienced various symptoms including low-grade fever and loss of sense of smell. Based on the New York Department of Health's criteria for COVID-19 testing, all of them should have had easy access to testing, right? Wrong. It took intervention from high-level individuals in medical administration to get them all tested. As a Black physician, I am leery of using my professional associations to obtain what should be normal medical services. Someone should not need connections to obtain basic medical care. Yet I felt I had to use my connections on behalf of my family's urgent health needs.

Reflecting on Julie's circumstances, one might think that a highly-educated health care professional like my sister would not suffer from lack of access to medical care. But regardless of her medical standing, contributions to society, and level of education, my older sister Dr. Julie Butler still could not access timely assessment, COVID-19 testing, or medical care.

She, like so many unnamed others, experienced the ultimate in bad outcomes because of her access to health care was too little, too late. This lack of access is largely related to individual's race, sex, age, and place of residence. These adverse outcomes are a result of implicit and direct biases from health care professionals. Unchecked discrimination and racism in the health care field is the silent killer among people of color and the pandemic exposed this ever-present epidemic.

According to the CDC's report Health Equity Considerations and Racial and Ethnic Minority Groups, "Long-standing systemic health and social inequities have put many people from racial and ethnic minority groups at increased risk of getting sick and dying from COVID-19." My sister was one of them.

As a physician with more than 30 years of experience, I have witnessed disparate treatment of people based on socioeconomic status, race, sex, age, gender, and even religious affiliation. It is shameful that in 2020, Black Americans and other people of color continue to experience disproportionate rates of chronic disease and premature death, including those related to COVID-19.

Of course, people of color are more likely to have risk factors that increase the likelihood of developing Covid-19. These include living in crowded housing and communities and working in "essential" fields such as environmental services, transportation, civil service, and home health, which aren't possible to do from home. These risk factors should put health care professional on high alert to do more for these patients. But if my sister is an example, they are doing less.

Fellow health care professionals, your biases could be a death sentence for people. As healthcare professionals we must do more to hold each other accountable. If you see or suspect bias in the workplace, call it out or report it. Medical administrators must also implement ongoing mandatory diversity, bias, and sensitivity trainings for their front-office and frontline staff. In addition, we must recruit, hire, retain, and promote more diverse staff whose voices and experiences represent the multitude of people and communities we serve.

We all have a responsibility to do the right thing for all people. Remember and act on our Hippocratic Oath to not permit considerations of religion, nationality, race, gender, politics, socioeconomic standing, or sexual orientation to intervene between my duty and my patient. Otherwise, we become more of a threat to human life than a service to it.