The GOP is "willing to lie, cheat and threaten our democracy all for the sake of gaining power," Gavin Newsom says 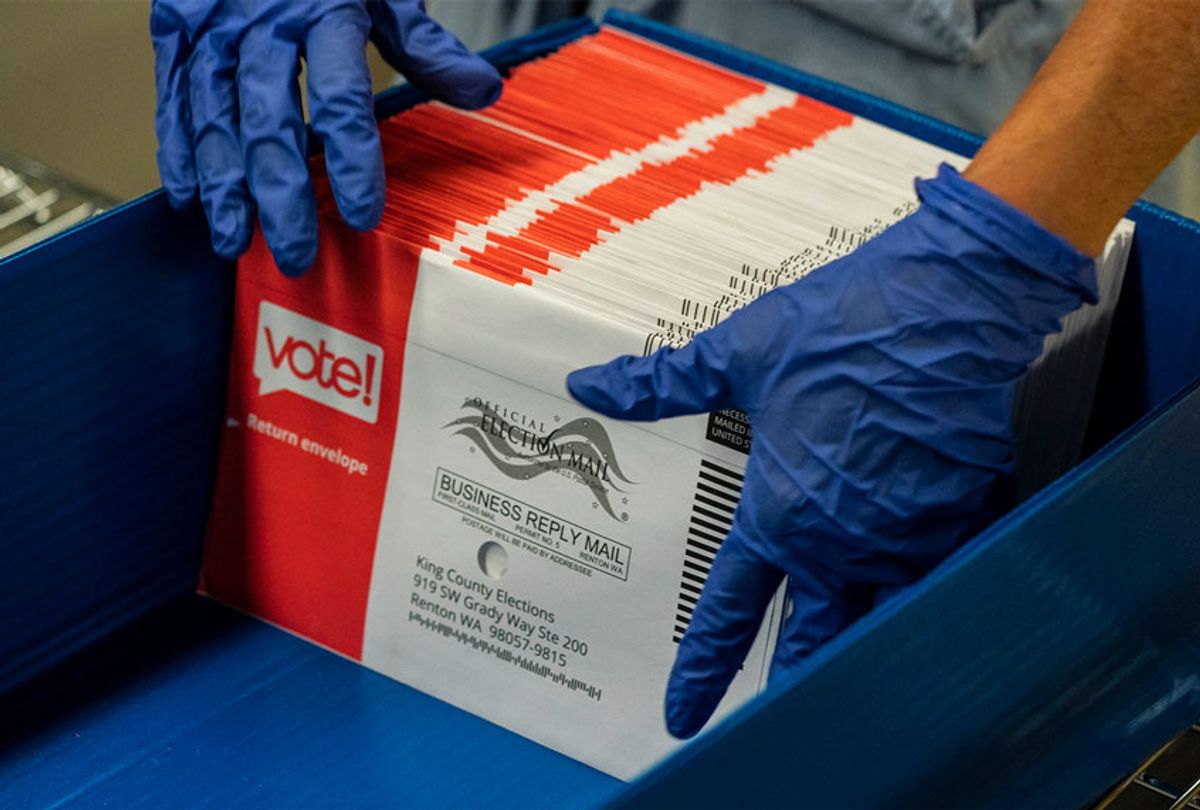 An elections worker sorts unopened ballots at the King County Elections headquarters on August 4, 2020 in Renton, Washington. Today is election day for the primary in Washington state, where voting is done almost exclusively by mail. (David Ryder/Getty Images)
--

The state GOP admitted that it was responsible for erecting fake "official" drop boxes in front of churches, gun stores and gyms. Secretary of State Alex Padilla said the boxes had been set up in "violation of the law."

Becerra and Padilla on Monday sent cease-and-desist letters to the GOP, which ordered the party to remove the collection boxes in Los Angeles, Orange and Fresno counties.

"Anyone who knowingly engages with the tampering or misuse of the vote is subject to prosecution," Becerra said during a Monday news conference with Padilla, in which he called the boxes "fake."

"It is illegal to tamper with a citizen's vote," the attorney general continued.

The boxes were "not permitted by state law," Padilla said, adding that "if they refuse to comply, we'll of course entertain all of our legal options."

Hector Barajas, a spokesman for the California Republican Party, told The New York Times that the GOP would not comply with the order and instead continue to set up the boxes without adding any label identifying them as a Republican effort.

Barajas argued that a 2016 law allowing "ballot harvesting," which allows a third party to submit mail ballots on voters' behalf, protects the practice.

"There is nothing in any of the laws or regulations cited in that advisory that indicate private organization drop boxes are not permitted," he said. "The way Democrats wrote the law, if we wanted to use a Santa bag, we could. A locked heavy box seems a lot safer."

State officials rejected that argument in a letter sent to the state GOP and several county chapters.

"The use of unauthorized, non-official vote-by-mail ballot drop boxes does not comply with state law governing ballot collection activities, which also require that persons to whom a voter entrusts their ballot to return to county election officials provide their name, signature and relationship to the voter," the cease-and-desist letter read.

The letter added that the state also had strict rules governing the security of official drop boxes.

"If you are in possession or control of any vote-by-mail ballots received through these unauthorized, non-official drop boxes, we demand that you immediately return and surrender those voted vote-by-mail ballots to the appropriate county elections official," the officials said.

Padilla said votes submitted through the boxes would still be counted, but Becerra acknowledged that the state had "no idea" what happens to the ballots after they are submitted.

The state GOP has remained defiant.

Becerra and Padilla suggested that the state might take legal action if the GOP does not comply by its Oct. 15 deadline.

"We hope that the message goes out loud and clear to anyone who is trying to improperly solicit, obtain and manage a citizen's vote that they are subject to prosecution," Becerra said. "I'm trying to be careful with how I say this, but the reports we are hearing are disturbing."

Gov. Gavin Newsom, a Democrat, accused Republicans of cheating by setting up the "illegal" boxes.

"Nothing reeks of desperation quite like the Republican Party organization these days -- willing to lie, cheat, and threaten our democracy all for the sake of gaining power," he tweeted. "These unofficial drop boxes aren't just misleading, they are illegal."