Trump’s COVID-19 diagnosis: What lies ahead could include a constitutional crisis over succession 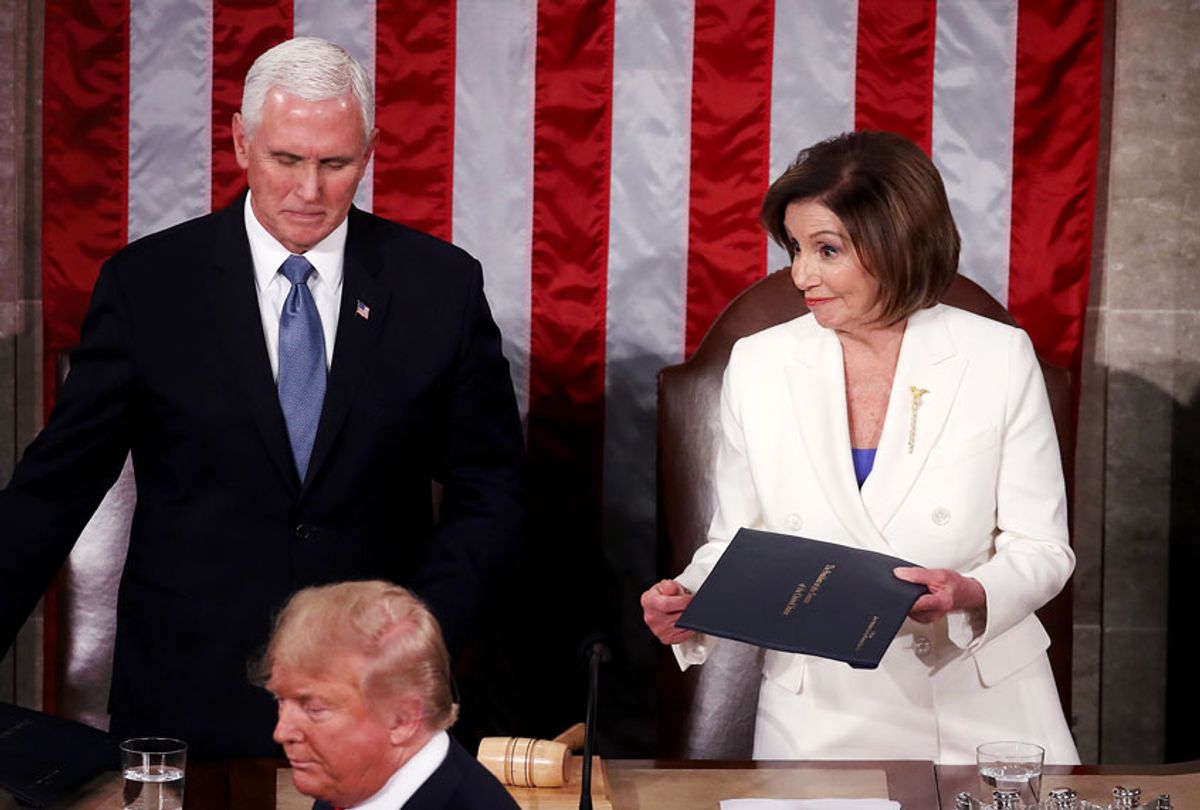 House Speaker Rep. Nancy Pelosi (D-CA) and Vice President Mike Pence look on as President Donald Trump steps to the lectern for the State of the Union address in the chamber of the U.S. House of Representatives on February 04, 2020 in Washington, DC. President Trump delivers his third State of the Union to the nation the night before the U.S. Senate is set to vote in his impeachment trial. (Mark Wilson/Getty Images)
--

Since Donald Trump was admitted to Walter Reed National Military Medical Center for COVID-19 treatment on Oct. 2, there have been conflicting messages about the status of the president's health.

While his doctor, Sean Conley, gave an upbeat account around noon on Sunday, the president's chief of staff, Mark Meadows, told reporters the day before, "The president's vitals over the last 24 hours were very concerning and the next 48 hours will be critical in terms of his care. We're still not on a clear path to a full recovery."

The prospect that Trump could be or become very ill raises the question of how the country can constitutionally transfer power if he is no longer capable of serving in his official capacity.

The answer is the little-used 25th Amendment to the United States Constitution.

That amendment has only been invoked a few times in history. And its lack of specificity about a situation in which the president is unable to determine himself whether he can carry out his duties means there is a potential constitutional crisis ahead in which the president may be unable or unwilling to give up power, even if he is clearly too ill to do his job.

The 25th Amendment, ratified by the states in 1967, declares that upon the removal, resignation or death of the president, the vice-president assumes the presidency.

Commonly referred to as the Disability Clause, this constitutional provision also specifies that if the president is unable to perform the functions of his office, the vice president will serve as acting president.

If the president is unable to determine his own decision-making capacity, it is possible – though this is an untested area of law – that the vice-president, independently or in consultation with the cabinet, would determine if he himself assumes the role of acting president.

But there is no precedent for this type of situation nor is there precise legal language that expressly outlines what the procedural processes should be if the president cannot determine his own ability to lead the nation. This is the constitutional crisis that may lay ahead.

In addition to the Disability Clause, there is legislation that clarifies the line of succession should the president become incapacitated.

The 1886 Succession Act made members of the president's cabinet direct successors if the vice president could not serve.

Upon assuming the presidency in 1945 after President Franklin Roosevelt's death, Harry Truman requested Congress to amend the 1886 Succession Act to provide greater clarification of succession protocol.

Truman wanted that succession to place the speaker of the House second in line after the vice president. After several years of negotiation, both houses of Congress agreed to this revision and passed the Presidential Succession Act in 1947.

The legislation specified that the line of succession begins with the vice president and is followed by the speaker of the House of Representatives, the president pro tempore of the Senate, the secretary of the U.S. Department of State, the secretary of the U.S. Department of the Treasury, and the remaining secretaries of cabinet departments in the order of when they were established as executive branch agencies.

Neither the Succession Act nor the 25th Amendment have ever been invoked for longer than a few hours.

Since March 2020, the U.S. has faced an extraordinary public health catastrophe. More than 200,000 Americans have died from the coronavirus and more than 7.2 million have been infected.

Over the last seven months, the president has publicly disagreed with his own team of medical and public health experts regarding precautionary measures that should be taken in order to minimize exposure to the virus. His staff have largely followed his lead.

Of particular note is a private White House reception and Rose Garden announcement to nominate Judge Amy Coney Barrett to the U.S. Supreme Court. More than 200 people attended, including many of the administration's most senior appointees and aides.

Few at this event wore a mask. And now a number of prominent attendees – including GOP senators Thom Tillis and Mike Lee, former New Jersey Gov. Chris Christie and former Counselor to the President Kellyanne Conway – have tested positive for coronavirus.

As someone who has worked in the office of the White House chief of staff during the Clinton administration, I can personally attest to the confining environment of the West Wing.

[Get facts about coronavirus and the latest research. Sign up for The Conversation's newsletter.]

Very few senior aides have their own offices. People are constantly in close proximity, including the president, which is why it remains perplexing that White House staff were not required to wear masks.

The decision to ignore CDC guidelines in the West Wing, at official government functions and at campaign events, coupled with the president's disparagement of public health measures, have placed the country into a potential leadership crisis where it is not clear who should be in charge.