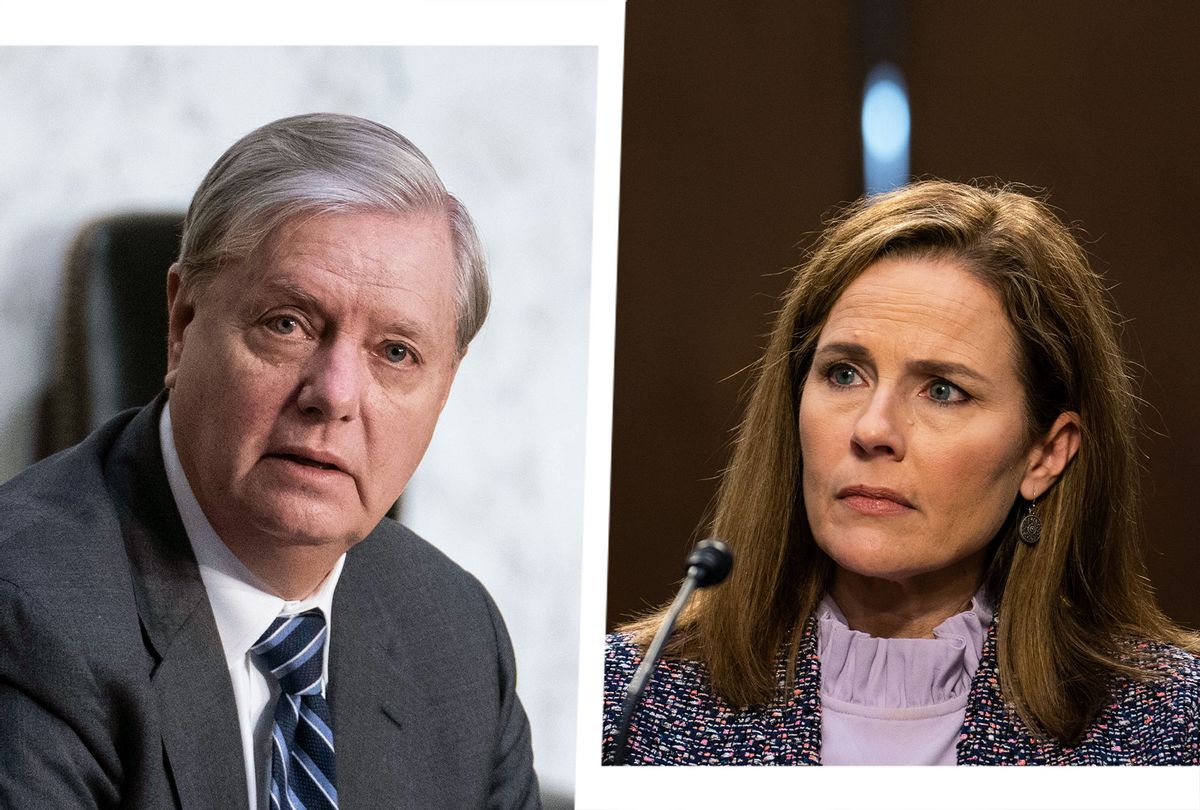 Supreme Court nominee Amy Coney Barrett argued in a dissent last year that felons should be allowed to own guns, a position Republicans on the Senate Judiciary Committee long opposed before defending President Donald Trump's nominee to replace Justice Ruth Bader Ginsburg on the bench.

Barrett, who was appointed to the Seventh Circuit Court of Appeals by Trump, broke with two fellow Republican-appointed judges with more than 70 years of experience and Attorney General Bill Barr's Department of Justice to defend gun rights for felon, according to The Washington Post.

The case, Kanter v. Barr, was brought by Rickey Kanter, a Wisconsin businessman who pleaded guilty to mail fraud. Kanter sued the Justice Department and the state of Wisconsin after completing his sentence, because federal and state laws prohibit felons from purchasing firearms.

"She is extreme on this issue," Sen. Richard Blumenthal, D-Conn., a member of the committee, told The Post. "She would go much farther than her mentor Scalia did in striking down common sense measures."

Barrett argued in a 38-page opinion that the Founders did not intend to deny gun rights to all felons — only those who may be considered dangerous.

"Neither Wisconsin nor the United States has introduced data sufficient to show that disarming all nonviolent felons substantially advances its interest in keeping the public safe," she wrote. "Nor have they otherwise demonstrated that Kanter himself shows a proclivity for violence. Absent evidence that he either belongs to a dangerous category or bears individual markers of risk, permanently disqualifying Kanter from possessing a gun violates the Second Amendment."

History showed felons "could be disqualified from certain rights," such as voting or jury duty, but gun ownership is an individual right which can only be suspended if a person is deemed dangerous, Barrett argued.

Barrett cited her mentor Justice Antonin Scalia's opinion in the 2008 District of Columbia v. Heller case, which established a national right to gun ownership. It said, "Nothing in our opinion should be taken to cast doubt on longstanding prohibitions on the possession of firearms by felons and the mentally ill."

"The constitutionality of felon dispossession was not before the court in Heller, and because it explicitly deferred analysis of this issue, the scope of its assertion is unclear," Barrett wrote.

The majority disagreed, and The Post noted that Barrett's opinion was "at odds with nearly all other federal appeals court decisions on the issue."

Her position was also at odds with many Republicans on the Judiciary Committee eager to confirm her ahead of Election Day.

Chairman Lindsey Graham, R-S.C., said in 2018 that the Second Amendment was "not an unlimited right," noting that "if you're a convicted felon, you can't own a gun."

"I think that most Second Amendment people like me understand there's a balance here," he told the Greenville News.

"One bullet in the hand of a mentally unstable person or a convicted felon is one too many," Graham argued during a Judiciary hearing in 2013 where NRA chief Wayne LaPierre agreed that a "convicted felon" should not be able to own a gun.

Sen. Chuck Grassley, R-Iowa, and Sen. Ted Cruz, R-Texas, sponsored legislation that would create a task force to "prosecute felons and fugitives who try to get guns."

Cruz last year urged the committee to pass the bill, which he said "targets resources on bad guys, on felons and fugitives that would have audited every federal agency to make sure that those felonies are reported to the background check database."

Sen. Thom Tillis, R-N.C., called on Congress in 2016 to address "how to keep guns out of the hands of terrorists, out of felons."

Sen. Josh Hawley, R-Mo., who previously served as Missouri's attorney general, filed a brief in a 2017 appeal that said "the Second Amendment does not protect the right of convicted felons to possess firearms."

Barrett defended her opinion when pressed on the issue by Sen. Dick Durbin, D-Ill., during her confirmation hearing on Tuesday.

"I think we could all agree that we ought to be careful of saying that because someone's a felon, they lose any of their individual rights," she said.

Durbin argued that she had "ignored" evidence showing that non-violent offenders were more likely to engage in illegal gun use than non-felons.

"I didn't ignore it," Barrett replied. "As I recall, that evidence and the studies were unclear."

Durbin went on to note that Barrett argued that gun rights were an individual right, while voting is a civic right.

"So you're saying that a felony should not disqualify Rickey from buying an AK-47, but using a felony conviction someone's past to deny them the right to vote is all right?" he asked.

"What I said was that the Constitution contemplates that states have the freedom to deprive felons of the right to vote," Barrett replied. "It's expressed in the constitutional text. But I expressed no view on whether that was a good idea — whether states should do that. And I didn't explore in that opinion, because it was completely irrelevant to it what limits, if any, there might be on a state's ability to curtail felon voting rights."

"Well, I will just tell you that the conclusion of this is hard to swallow," Durbin said. "The notion that Mr. Kanter, after all that he did, should not be even slowed down when he's on his way to buy a firearm. My goodness, it's just a felony. It's not a violent felony that he'd committed. And then to turn around on the other hand and say, 'Well, but when it comes to taking away a person's right to vote, that's the civic duty.'"

Durbin went on to rebuke the Republicans on the committee who had criticized Democrats for wanting "activist judges."

"Yet when we look at this case, the notion of what disqualifies you from buying a firearm was being rewritten by the dissenting judge and saying, 'When we say felony, we just mean violent felony,'" he said.

"There's a whole host of public safety bills and laws that we've had in effect for a quarter century — including the Brady background check system — that we are concerned about with her on the court," Kris Brown, the president of Brady United Against Gun Violence, told NPR.

"Make no mistake," John Feinblatt, the president of Everytown for Gun Safety, told Mother Jones. "Amy Coney Barrett is a gun rights extremist who has no place on the Supreme Court."