Many businesses now require them in order for patrons to enter. But experts say they have issues 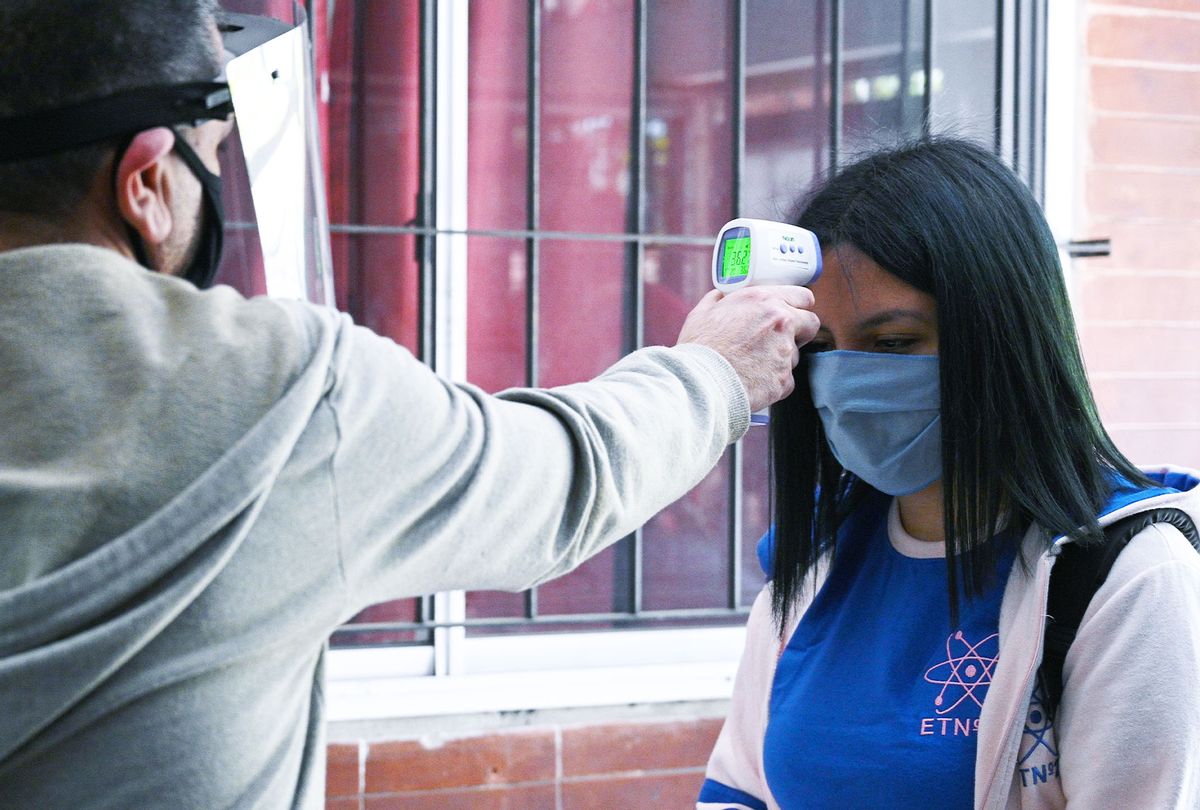 Workers at a high school check the temperature to a student before she enters to attend classes in Buenos Aires, Argentina, on October 13, 2020 amid the virus lockdown against the spread of the novel coronavirus, COVID-19 pandemic. (JUAN MABROMATA/AFP via Getty Images)
--

Recently, I went to an outdoor beer garden in San Francisco, which, in pre-COVID days, would have a line for ID checks. The bouncer still does that, but they also hold an infrared temperature "gun" to check incoming patrons for a fever. Once the bouncer aimed the white gun at our heads and got a normal reading, we'd be cleared for entry.

But something strange happened. My partner caught a glimpse of his temperature, according to the temperature gun: it was in the mid 80s. "Guess I'm dead," he mused. But that got us thinking: did this no-touch thermometer actually work? And did it matter if it didn't?

Thermometer guns are the new gatekeepers for a majority of businesses. You can spot them at the entrance to hospitals, airports, office buildings, manufacturing plants, restaurants, schools, and so on. Yet research into their effectiveness doesn't make a compelling case for their newfound ubiquity. As the country faces yet another coronavirus wave, it's worth asking if this mitigation measure is something we should keep doing or a mere waste of resources.

Indeed, research suggests that the peak of contagiousness for the coronavirus is right around the time when symptoms surface. But those with COVID-19 are also contagious before they start feeling sick. And then what about people who don't have any symptoms at all, who are asymptomatic but still contagious?

"I think that temperature checks are probably not super effective in the big picture," Gostic added. "I mean, it's possible that they might detect someone who's actually sick with COVID-19 and who's infectious .... but if the goal is to dramatically decrease the opportunities for transmission overall, temperature checks are not going to be an effective way to detect the majority of people who have COVID-19."

Then there's the question of whether or not a fever is as common of a symptom as medical professionals initially believed. Dr. Natalie Lambert, an associate research professor at Indiana University School of Medicine, surveyed the results of nearly 4,000 people who had COVID-19. In a non-peer reviewed paper published in conjunction with Survivors Corps, only 7.66 percent of survey respondents reported having a fever within the first ten days of having COVID-19. Instead, the more common symptoms were fatigue, cough, headache, and difficulty breathing.

"The big picture story behind this study, besides the fact that we need to have quick policy changes, is that we can't use fever checks anymore and be confident that we're stopping the spread of COVID-19 because we're not," Lambert told Salon. "But the bigger picture story here first is that we attracted participants — most of them who were non-hospitalized — so we're finding that the research about hospitalized patients shows a vast majority of them did have a fever. But most of our participants were not hospitalized, and most of them did not have a fever during the first 10 days, when they're contagious."

The Centers for Disease and Control states that a fever is one of the most common symptoms for people who do get sick with COVID-19. However, there's research, in addition to Lambert's, that brings into questions the prevalence of fever as a common symptom. In June, a study that concluded fever screens may provide "a false sense of security" after finding that a minority of COVID-19 patients in an Australian hospital were admitted with a fever. However, according to an April 2020 study, 55.5 percent of 374 hospitalized patients had a fever. Interestingly, a separate study published in August showed that for non-hospitalized patients, only 16 percent of 208 confirmed SARS-CoV-2-positive patients reported having a fever.

"Our findings suggest that the demographic and clinical characteristics of non-hospitalized adults with COVID-19 illness differ from hospitalized patients with regard to age, gender, race/ethnicity, and prevalence of underlying medical conditions," the researchers concluded.

So why is the CDC still recommending temperature checks? Gostic told Salon that temperature screens are often adopted during pandemics, during the H1N1 outbreak, and during the Ebola pandemic, in airports as a mitigation strategy in part because it's a way for people to feel like they are doing something to contain the virus.

"There's a pretty solid history of scientific consensus that these temperature screens are not very effective when they're adopted at airports to contain pandemics," Gostic said.  "Despite the science we need, we see them adopted, time and time again just because they're often the only thing I think that people can think to do in response to a virus that we don't know very much about."

Amesh Adalja, who's a senior scholar at Johns Hopkins Center for Health Security, told Salon he agrees that that fever checks alone won't be effective in slowing the spread of the coronavirus.

"I think that temperature checks need to be coupled with a full suite of screening activities because not everybody that has that that is infected or symptomatic is going to exhibit a fever," Adalja said. "I think it can be one part of that system, but it has to be coupled with asking people 'Do you have chills, muscle aches and pains, nausea, vomiting, diarrhea sore throat, loss of taste, smell, shortness of breath, cough?' All of that needs to be asked."

All the experts I spoke with agreed that there is one mitigation strategy that could get us back to some sense of normalcy and be effective in slowing community spread of the coronavirus: rapid testing.

"What I think would be more effective, although also more expensive, would be rapid antigen tests," Gostic said. "Detecting the presence of the coronavirus in someone's saliva is a much more direct indicator of whether that person is contagious than trying to take their temperature."

"Ideally, what we need in order to be confident that people aren't spreading COVID-19 is rapid and accurate COVID-19 tests," Lambert said.