How fascism has converged with capitalism to redefine government

The tendency of capitalism is toward instability, inequality, and fascism 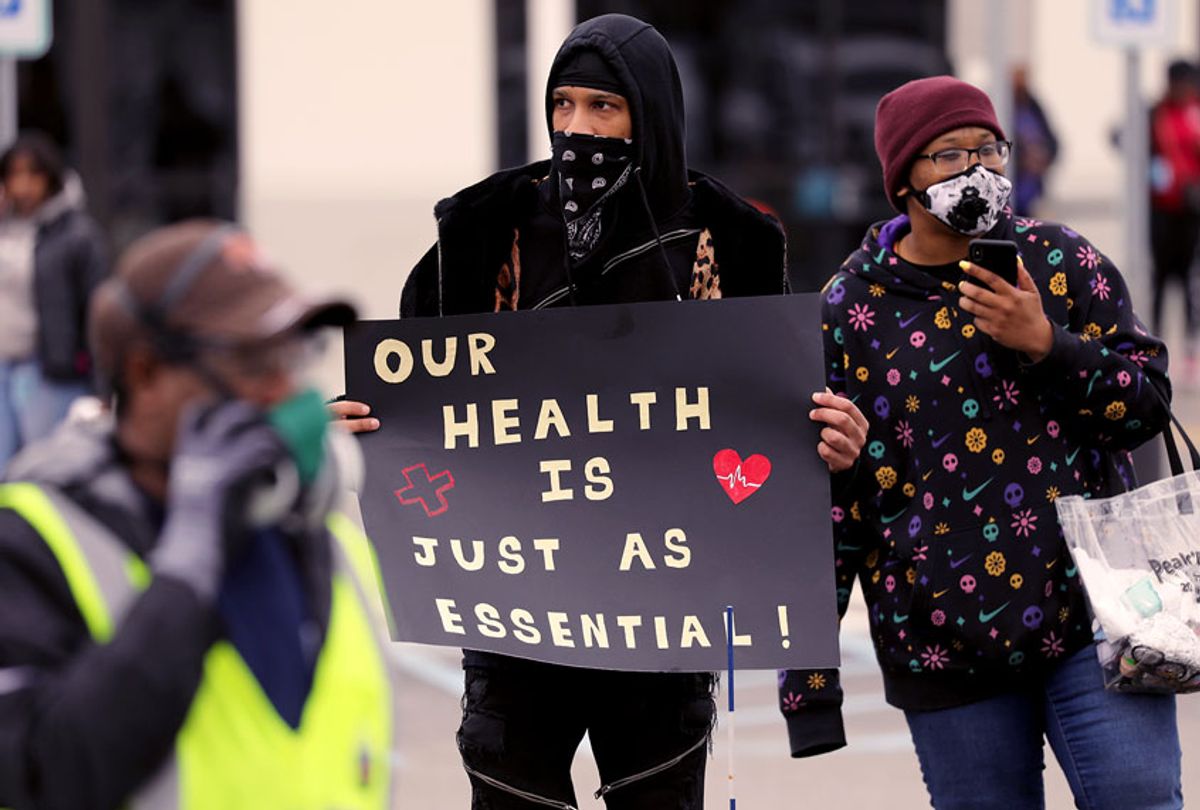 The looming election has brought forward intensifying debates over a capitalism in crisis, rising nationalism and state power, and the possibility of a renewed fascism. Polarized politics and ideologies alongside long-accumulated social problems and movements shape the objects and tones of debate. Can fascism happen here; is it underway? Or can current capitalism avoid a return to fascism? Such questions reflect the high stakes of the election and this moment in history.

Should the state—the institution that organizes, enforces, and adjudicates the rules governing our behavior in society—exist in capitalism? That question has been important chiefly for certain ideologues who defend capitalism. Their major idea is that the problems of modern society are caused by the state. They are not caused by the employer-employee structure of capitalist enterprises or the markets, unequal distributions of wealth, and other institutions those enterprises support. Those ideologues imagine a pure, perfect, or good capitalism undistorted by any state apparatus. The capitalism they seek to achieve is very utopian. They conclude that by reducing the state (bad by definition), modern capitalism's problems can also be reduced. By eliminating the state, a thereby purified capitalism will solve those problems. From libertarians to Republican Party hacks, this ideology serves to deflect the justified resentment and anger of capitalism's victims away from capitalism and onto the state.

A contrary view holds that the state always existed throughout the history of societies in which the capitalist economic system prevailed. In them, the state—like other institutions—reflected each society's particular conditions, conflicts, and movement. The capitalist economy rested on a foundation of enterprises whose internal organization divided participating individuals into a minority (employers) and a majority (employees). The minority owned and operated the enterprises, making all of its basic decisions: what, how, and where to produce and what to do with output. The majority sold its labor power to the minority, owned little or nothing of the enterprise, and was excluded from the basic enterprise decisions. One result of that basic economic structure was the existence of a state. Another result was a pattern of state interventions in society that reproduced its prevailing capitalist economic system and the employers' dominant position within it.

Of course, the many internal contradictions of societies in which capitalism prevailed also influenced and shaped the state. Employees, for example, could and often did press the state for interventions that employers did not want. Struggles over the state and its interventions ensued. Individual outcomes varied, but the pattern that emerged over time was a state that reproduced capitalism. Likewise, in pre-capitalist societies such as slavery and feudalism, parallel patterns characterized their states. For considerable periods, those states also reproduced their class structures: masters and slaves in slavery and lords and serfs in feudalism. Usually, when a state no longer reproduced a particular class structure, its end was near.

The evolving conditions and conflicts in each society determined the size, activities, and history of its state. This includes determining whether state power is decentralized, centralized, or a mix of both. Social conditions and conflicts also determined the closeness, the intensity of collaboration, and even the possible merger between the state apparatus and the dominant class within each society. In European capitalism, initial decentralization gave way to a strong tendency toward state centralization. In certain extreme conditions, a centralized state merged with a capitalist class of large, concentrated employers into a system called fascism. The 20th century saw several major examples of fascism rise and fall. Now again fascism looms as a possible resort of capitalisms in trouble.

Usually, the transition from decentralized to centralized states reflected social conditions in which dominant classes needed strengthened state power to reproduce the system they dominated. They feared that otherwise, social conditions would provoke a collapse of their system and/or movements to a different economic system. In either case, their social dominance was at stake. Because that situation now looms on our historical agenda, so too does fascism.

Slave systems could persist in decentralized conditions. State power, perhaps localized within each slave master's hands, oversaw the reproduction of the system's two production positions: master and slave. Eventually, when reproduction was threatened—by disruptions to slave markets, slave revolts, or divisive struggles among masters—a separate state was created, given an apparatus, and strengthened. It often had slaves of its own ("state" slaves we might differentiate from "private" slaves owned by persons outside the state). Such a strengthened state was often more closely integrated with masters in a tighter, more coordinated reproduction of slavery. Violence by masters and the state conjointly against slaves recurred often.

In decentralized feudalisms, lords wielded state-type powers alongside their economic positions directing production by their subordinated serfs. Eventually, when pandemics, long-distance trade, serf revolts, or divisive warfare among lords (as dramatized in Shakespeare's plays) threatened feudalism, a centralized state arose from among contending lords. That state—a supreme lord or king—shared social power with the hierarchy of what we might call "private" lords to reproduce feudalism. In medieval Europe, strengthened feudal states evolved into absolute monarchies. Those were tight alliances between kings and hierarchies of lords within boundaries defining different nations. Those tight alliances deployed violence against serfs, serfs' revolts, rebellious lords, external threats, and one another.

Capitalism, like its slave and feudal predecessors, emerged in small, decentralized units of production. Capitalist enterprises, like slave and feudal production units (plantations, manors, or workshops), also displayed a system of two basic production positions. In the case of capitalism, those two positions were employer and employee. The differences were that in capitalism, no person owned another (unlike slavery), nor did one person owe religiously sanctioned labor obligations to another (unlike feudalism). Instead, a market in labor power was established over time. Employers were buyers and employees were sellers in a market exchange.

When problems eventually threatened the reproduction of early capitalism, it strengthened its state apparatus much as slavery and feudalism had done. One such problem was opposition by centralized slaveries and feudalisms to the capitalism that had emerged from them. Likewise, as capitalism grew and expanded across the globe, it disrupted other systems in ways they resisted. Violent interventions by strengthened state apparatuses subdued and reorganized them into what eventually became capitalism's formal and informal colonies. Such interventions encouraged a strong capitalist state and vice versa. The demands and revolts of employees also drove capitalists to construct state apparatuses that could discipline and suppress them. Likewise, "cutthroat" competition among employers required a powerful arbiter to manage and control them.

Even as capitalism spawned a strong state, there was a remarkable hesitancy in doing so that has confused the history of capitalism to this day. The hesitancy arose because early capitalism—the period when emerging capitalist enterprises were relatively small and hampered by powerful slave or feudal states—saw those states as its enemy. Capitalists and their spokespersons wanted the state kept out of the economy, blocked from favoring noncapitalist over capitalist enterprises. They wanted capitalist enterprises and the markets they increasingly dominated to be left alone by the state. Hostility to and thus hesitancy about strong states went from advocating "laissez-faire" in the 17th century to celebrating "the free market" in modern times. In the latter form, it is utopian, an imaginary construct useful for ideological projects justifying capitalism (as "efficient") and for libertarian slogans. No actual capitalism in recent centuries ever had a free market without state interventions and regulations.

From the 18th through the 20th centuries, capitalism spread globally from its initial centers in western Europe. The state was crucial to that spread via warfare ("opening" regions to trade) and colonizations. Conflicts among capitalists, especially the endemic struggles between competitive and monopoly capitalists and between capitalists from different nations, necessitated state interventions. Capital-labor conflicts and battles were always goads to state strengthening and interventions. Massive standing military establishments, routinized after World War II, generated military-industrial complexes. Those complexes, especially in the leading capitalist and military power after 1945, were just the kind of mergers of state and big capitalists that became models for parallel mergers among other industries and the state.

In the United States, one such parallel merger yielded the medical-industrial complex. There the role of the state was to protect a monopoly shared among four industries: doctors, hospitals, drugmakers and medical device-makers, and health insurance companies. The government enabled and sustains its merger with the medical-industrial complex. It does so in multiple ways. It exempts the complex from antitrust action. Government-subsidized Medicare and Medicaid—public health insurance for the elderly and the poor—carefully leave the younger, healthier, and more profitable clientele to the private health insurance companies. The government avoids buying pharmaceuticals in bulk and passing savings onto the public. Finally, the government has usually blocked and mostly denounced genuinely progressive reforms of this privately profitable medical system as "socialism."

De facto, if not de yet de jure, mergers of state and capitalist industry punctuated the growth of state power alongside the concentration and centralization of capital.

Now we have much the same happening in finance. Central banks—largely state institutions—long marched in close formations with major private banks in capitalist countries. The Federal Reserve has responded to the three capitalist crashes so far this century by not only greatly increasing its money creation and interest rate reductions but also by extending credit to nonfinancial corporations. The Fed buys corporate bond exchange-traded funds, corporate bonds in the secondary market, and asset-backed securities based on corporate debts. The Fed likewise now owns a third of residential mortgages. Government credit becomes ever more important relative to private credit. The government will soon coordinate its decisions on who gets how much government credit with other government policies including which Chinese companies get banned and which European companies get sanctioned. These financial developments mark more milestones on the road to state-capitalist merger.

Behind the racism, nationalism, and war-mongering that Hitler championed lay the core economic system of fascism. That involved a merger of the state and private big capitalists. The former enforced the conditions of profitability for the latter. In turn, the capitalists accommodated the running of their enterprises to finance, produce, price, and invest in ways supportive of the fascist state's policies. Expropriation of privately owned means of production targeted selected social sub-groups (such as Jews). Aryanization—not abolition—of private capitalism was the state's objective.

Fascism's economic organization is where economic development is now taking capitalism in general and U.S. capitalism in particular. U.S. capitalism now replicates a parallel tendency toward merger with a strong state that characterized slavery and feudalism earlier. Systemic challenges to capitalism's reproduction are met with growing state power, growing big capitalist business, and eventually their merger into a fascism. Exactly how and when capitalism evolves into fascism varies with the particular conditions and challenges of each national context. Likewise, the internal contradictions of capitalism—for example, its cyclical instability and its tendency toward deepening wealth and income inequality—can provoke mass resistances that can slow, stop, or reverse the evolution, at least for a while, or even redirect economic transition to socialism.

But the tendency of capitalism is toward instability (its cycles), inequality (its upward redistribution of wealth), and fascism (state-capitalist merger). The first 20 years of this new century display these tendencies in stark relief.