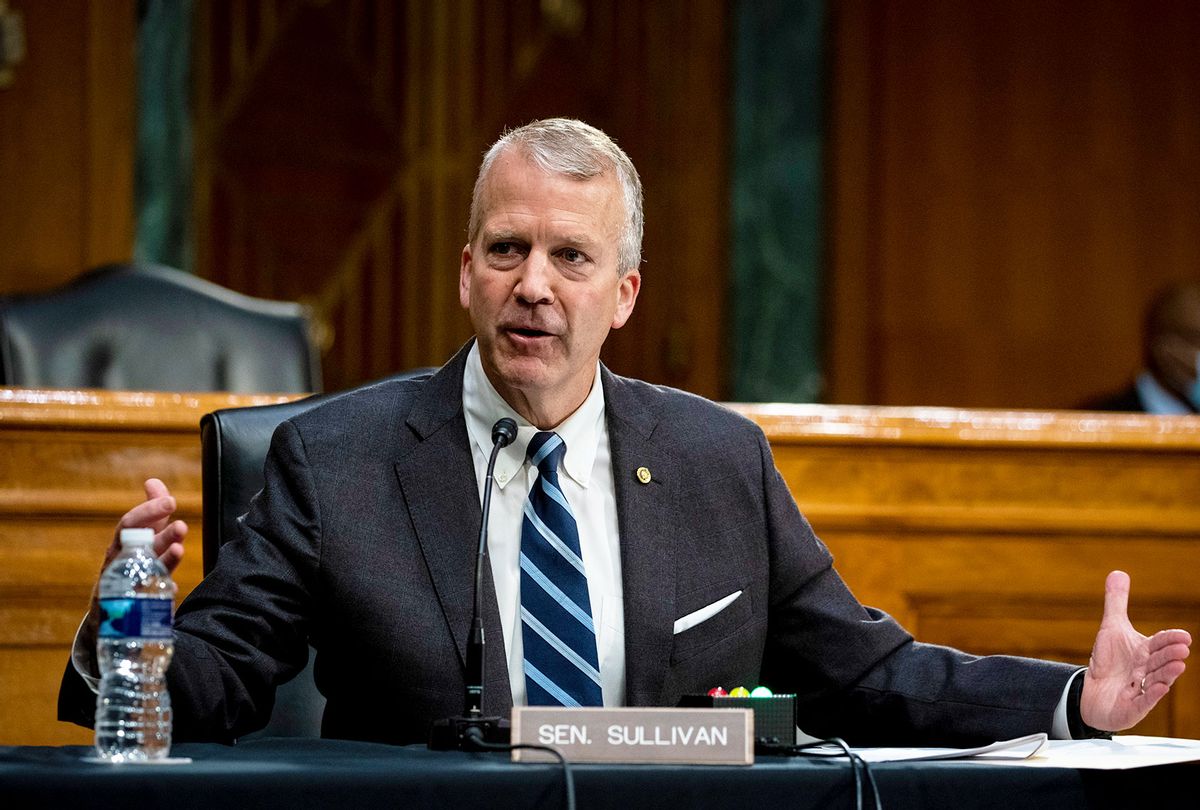 Senator Dan Sullivan, a Republican from Alaska, speaks during a Senate Environment and Public Works Committee hearing with Andrew Wheeler, administrator of the Environmental Protection Agency (EPA), not pictured, May 20, 2020 on Capitol Hill in Washington, D.C. EPA Administrator Andrew Wheeler will face questions as his agency faces legal challenges and criticism for easing enforcement during the COVID-19 pandemic and rolling back vehicle emissions rules. (Al Drago-Pool/Getty Images)
--

Sullivan, first elected in 2014, has come under scrutiny in recent weeks as Democratic-aligned groups pour money into the Alaska race in a surprising effort to expand the electoral map. A recent investigation by Popular Investigation detailed connections between Sullivan and corporate donors pushing to develop Pebble Mine, a sprawling project in a part of Alaska home to the world's largest sockeye salmon fishery and a number of federally sanctioned tribal governments.

The Republican incumbent's committee appointments and voting record reviewed by Salon appear to show links to another industrial interest with a record of environmental negligence: Republic Powdered Metals International (RPM), a sealant and coating manufacturer founded by his grandfather in 1947. Sullivan's older brother, Frank, is the current CEO.

Senate records show that Sullivan holds between $1 million and $5 million in RPM stock. He has reported earning up to $300,000 in dividends and capital gains since filing his first financial disclosure in 2014. He has augmented that income with eight stock sales since 2018, bringing in a total of $495,000, the disclosures show.

The Associated Press reported in 2015 that Sullivan's committee assignments, which oversee areas of interest to RPM, were his "top picks."

"Sullivan said he is excited to get to work and pleased with his committee assignments, which he said were his top picks," the outlet wrote. "Sullivan will serve on the committees of Commerce, Science and Transportation; Environment and Public Works; Armed Services; and Veterans' Affairs."

The Committee on Environment and Public Works conducts oversight for the Environmental Protection Agency, which has targeted RPM during Sullivan's term. The conglomerate has paid more than $2.2 million in fines since 2015 to various environmental regulatory agencies, including the EPA, for violating the Clean Air Act and chemical reporting requirements, among other citations.

RPM expressed its frustration with government oversight in its July 2020 annual filing with the Securities and Exchange Commission, claiming that the government had burdened the company with "numerous, complicated and often increasingly stringent environmental, health and safety laws and regulations."

That filing shows that an RPM subsidiary called Carboline agreed to a $1.3 million settlement with the EPA for violating the Comprehensive Environmental Response, Compensation and Liability Act after a citation for what the company characterized as "the release or threatened release of hazardous substances" at the Lammers Barrel Superfund site in Beavercreek, Ohio. The final amount was still subject to approval at the time of the filing.

Other subsidiaries of RPM have also been hit with fines in previous years. New Jersey's Department of Environmental Protection filed a $192,000 citation with Kirker Enterprises in 2019 for failing to fully meet conditions for an air permit.

Rust-Oleum, another RPM subsidiary, agreed to a $168,000 settlement in 2018 with the EPA for violating hazardous waste reporting requirements at its plant in Williamsport, Maryland. The same plant paid out another $133,000 one year later. (No waste was released, according to the EPA.)

RPM paid out another $181,000 to the EPA in 2017 for violations of the Clean Air Act by Rust-Oleum. Its 2018 SEC filing disclosed that Rust-Oleum had struck a $455,000 settlement with California's air quality regulator regarding hazardous compounds.

In committee, Sullivan voted against EPA regulations for certain harmful carcinogen contained in sealants manufactured and sold by RPM, such as formaldehyde. He also voted against a 2015 amendment which would have strengthened asbestos regulations. In the previous year, RPM subsidiary Bondex had paid $800 million to settle asbestos claims, pushing it to file for bankruptcy.

That amendment would have designated asbestos as a "high priority chemical for regulation under the law," according to Congressional Quarterly. Sullivan's vote was consequential, in that the committee rejected the amendment by a margin of two votes.

Sullivan also voted to confirm two EPA administrators nominated by President Trump — Scott Pruitt and Andrew Wheeler, the agency's current head — who both later blocked proposed Obama-era regulations of a chemical implicated in a wrongful death lawsuit pending against an RPM subsidiary. Both nominees were confirmed along party lines.

The woman who brought the wrongful death suit settled with Rust-Oleum in June 2020. She also sued the EPA in 2019 for refusing to ban the chemical outright. That case remains pending.

In committee, Sullivan voted against a number of amendments to the Frank Lautenberg Chemical Safety for the 21st Century Act to strengthen EPA oversights on chemical companies and compounds contained in RPM products. One amendment would have imposed new compliance requirements, while another would have required the EPA to consider the threat the substances posed to drinking water. Both amendments failed, and in the case of the latter amendment, Sullivan's vote was decisive. (The amendment failed on a tied 10-10 vote.)

Sullivan also cast a pivotal vote on an amendment which would have allowed the EPA to investigate pollutants and toxic substances that may cause cancer and other disease clusters.

Throughout this time, RPM lobbied continually against environmental regulations and compliance standards that, in the company's words, "could subject us to unforeseen future expenditures or liabilities, which could have a material adverse affect on our business." Targets included the Clean Air Act, the Clean Water Act and the Toxic Substances Control Act.

Beyond Sullivan's stock sales and dividends, his campaigns have received more than $70,000 from RPM employees and executives. The company's PAC contributed the maximum $10,000 to Sullivan's 2020 re-election campaign, federal filings show.

Sullivan's Senate office and RPM International did not reply to Salon's requests for comment.