Trump attacks his Democratic rival as "Beijing Biden." He owns a mysterious bank account in China 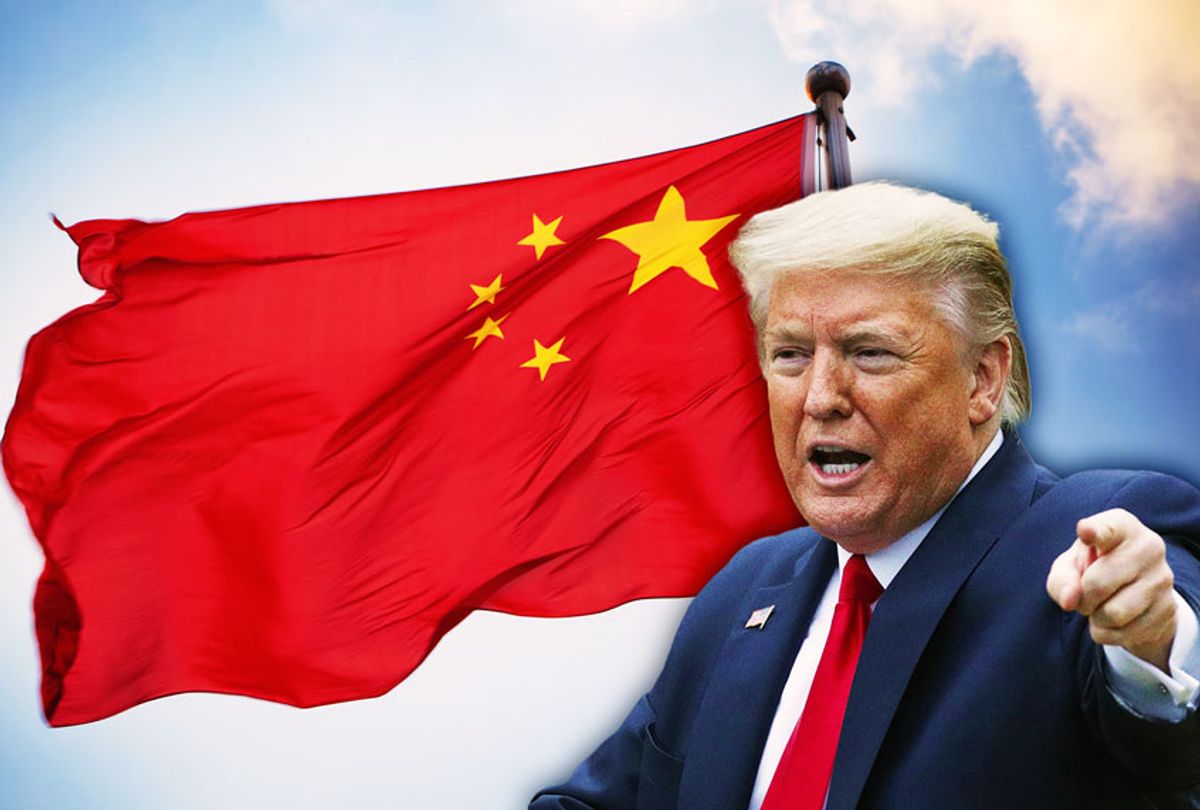 President Donald Trump, who has frequently attacked his Democratic challenger Joe Biden as "Beijing Biden," owns a bank account in China, where he has chased development deals for years — a pursuit which appears to have followed him into the White House.

The account's existence was first revealed Tuesday as part of the New York Times' investigative series on Trump's tax returns, which he has refused to share with the American public. Controlled by a company called Trump International Hotels Management, the account has reportedly paid nearly $200,000 in local taxes to the nation's chief geopolitical foe between 2013 and 2015.

China is one of only three foreign countries — along with the U.K. and Ireland — where the president holds a bank account, per The Times. Because the accounts are listed under corporate names, they do not appear in Trump's federal financial disclosures. The Times could not identify the banks associated with the accounts.

The British and Irish accounts are held by the Trump companies running the president's golf courses in Scotland and Ireland, which report millions of dollars in revenue, according to The Times. By contrast, Trump International Hotels Management reported earning just a few thousand dollars from China.

Alan Garten, a lawyer for the Trump Organization, told The Times that the company "opened an account with a Chinese bank having offices in the United States in order to pay the local taxes" for business dealings in the country. The company opened the account after creating an office in China "to explore the potential for hotel deals in Asia," he said, adding that the company was inactive.

"Though the bank account remains open, it has never been used for any other purpose," he claimed.

However, Garten would not tell The Times the name of the bank.

The Industrial and Commercial Bank of China — which is not only China's largest bank but also the largest bank in the world — has leased a full floor in Trump Tower in New York for years, a fact Trump made clear when he announced his candidacy in June 2015.

"I love China. The biggest bank in the world is from China. You know where their United States headquarters is located? In this building — in Trump Tower. I love China," Trump said at the time. "People say, 'Oh, you don't like China?' No," he repeated, "I love them."

This year, however, Trump has sought to associate Biden with China in a negative light. The president has boasted about false gains from his trade war and repeated xenophobic slurs about the origins of the coronavirus pandemic while praising Chinese premiere Xi Jinping's own response to the crisis. He has called Biden "China's puppet" and promoted baseless claims about his son's business dealings with the country, which have found foothold among a number of campaign surrogates.

"I'll bet you Hunter is a middle-man. He's like a vacuum cleaner. He follows his father around collecting money," Trump recently said. "What a disgrace. It's a crime family."

Amid the Ukraine scandal last year, Trump publicly called on China to investigate the Bidens.

Biden's own financial disclosures and tax returns, which have been publicly released by the former vice president, show no financial or business relationships with China. Trump's known efforts to land business in the country date back decades. Opposition research compiled in 2016 by former British spy Christopher Steele indicated that the Trumps were far more concerned about disclosing their dealings with China than their efforts in Russia.

Per the Steele dossier, the campaign was "relatively relaxed" about ties to Russia, "because it deflected media and the Democrats' attention away from Trump's business dealings in China and other emerging markets. Unlike in Russia, these were substantial and involved the payment of large bribes and kickbacks which, were they to become public, would be potentially very damaging to their campaign."

A source "close to Trump and [his former campaign manager Paul] Manafort" said the "Republican campaign team happy to have Russia as media bogeyman to mask more extensive corrupt business ties to China and other emerging countries," according to the dossier.

The Times reported that Trump's known efforts in China date back to 2006 trademark applications filed in Hong Kong and the mainland. Business dealings escalated from 2008 to 2012, and then beyond. Trump's daughter, Ivanka, scored a number of Chinese trademarks for her personal brand after she joined the administration in 2017.

Because a company that handles most of those efforts also manages several other overseas Trump-branded properties, it is impossible to tell from tax returns how much business the president conducts with China. The company's revenue spiked in 2017, Trump's first year in office, to around $17.5 million — more than the previous five years' combined, according to The Times. The president withdrew $15.1 million from the company's account that year, reporting it in his financial disclosure as "management fees and other contract payments."

Just before the 2016 Republican National Convention, a Chinese couple from Vancouver, home of a recently built Trump-branded hotel and tower, paid $3.1 million for 11 condos in the Las Vegas tower that Trump co-owns with casino mogul Phil Ruffin — a project which loaned Trump $21 million later that September. The owner of a Vegas-based financial firm told The Times that FBI agents had later inquired about the shell company.

Garten said the Trump Organization had "never been contacted by the FBI and has no knowledge of any investigation."

Ivanka and her husband, senior White House adviser Jared Kushner, had previously lived in a Trump penthouse in Manhattan which Trump sold to a Chinese-American businesswoman named Xiao Yan Chen for $15.8 million in an off-market transaction, per The Times. Chen reportedly has a number of ties to Chinese government and business officials.

The president's taxes show a capital gain of at least $5.6 million from that sale, in 2017 — his first year as president.

In 2018, CNN reported that Trump's Vancouver hotel had been the subject of a counterintelligence inquiry related to Ivanka Trump's security clearance application.