Lara Trump: No, that's not funny at all

"How is it 'fun' to have armed domestic terrorists plotting clandestinely to kill governors?" 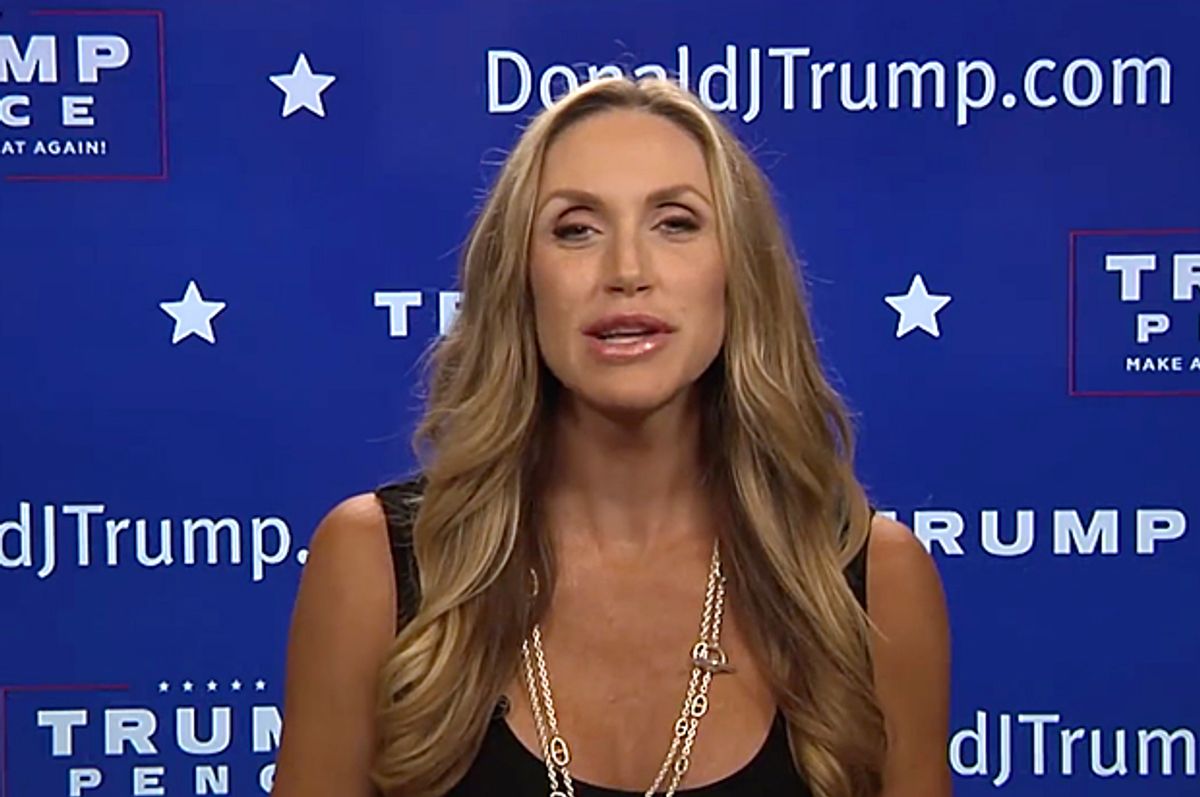 Trump's rally chanted, "Lock her up" with Whitmer now the target, despite the fact that she was the subject of a plot broken up by the FBI to kidnap and possibly kill her.

Host Jake Tapper asked whether Trump should be watching his tone, but mine was why is this "fun"? It seems to be a reflection of a leader who is cruel and so self-concerned that he can't notice that he is inflicting harm on others.

That, of course, is the only logical explanation for why Trump can so easily turn his back on mask-wearing and physical distancing to forestall coronavirus contagion, and why he can't see the impact of his own policies on immigration, environment, climate and economic inequality on actual Americans.

Once again, it is Trump First, not America First.

How is it "fun" to have armed domestic terrorists plotting clandestinely to kill governors?

How is it "fun" to mock women's looks or a reporter's physical disability or ethnicity?

How is it "fun" to call for unexplained and unspecified criminal charges against Joe and Hunter Biden over whether the son took advantage of dad's position — as if that exact situation did not also describe the Trumps?

I'm less concerned with Lara Trump's remarks than the sentiment clear at the rallies themselves — that someone else must pay for my discomfort — and that anything other than adoration for a regal Trump is criminal behavior.

Americans are going to be tested sorely in coming weeks over election counts and the distinct move to the Right by our Supreme Court as the result of a hurried and unfair judicial nomination. Democratic principles are at stake, but so will be practical details of health care amid pandemic, jobs and whether we have any trust in government.

Trump says he is promoting hope, but he depends on the darkest tools at hand — outward racism and division and spread of disease rather than containment — in his zeal. Actual individuals don't seem to count, unless their stories advance his real or made-up views about what he thinks Americans want.

Joe Biden's lead in the polls clearly has been shown to be more a reflection of the possibility of removing Trump than it is in enthusiasm for him personally or perhaps even for the programs he supports. Though his insistence on realism reflects a harder path ahead, his campaign is much more hopeful than Trump's.

Plus, Trump is no one to be talking about locking people up, since, if he loses, he looks to be facing a number of actual criminal charges.

Writer Robin Wright, in The New Yorker, asked last month whether America is a Myth, that our unraveling present actually reflects a history of division and tribes almost from the beginning. She argues that there never was a reason to believe that the different strains of what America is about ever really has come together.

"The foundation of our nation has deepening cracks — possibly too many to repair anytime soon, or perhaps, at all. The ideas and imagery of America face existential challenges — some with reason, some without — that no longer come only from the fringes. Rage consumes many in America. And it may only get worse after the election, and for the next four years, no matter who wins," she says.

"Three hundred and thirty million people may identify as Americans, but they define what that means — and what rights and responsibilities are involved — in vastly different ways."

It's a sad commentary, but even division is no excuse for cruelty.