News flash: Trump behaves himself! But after that flaccid performance, it's almost over

Trump's voters loved him in the first debate. But on Thursday, he seemed sour, flattened and all but defeated 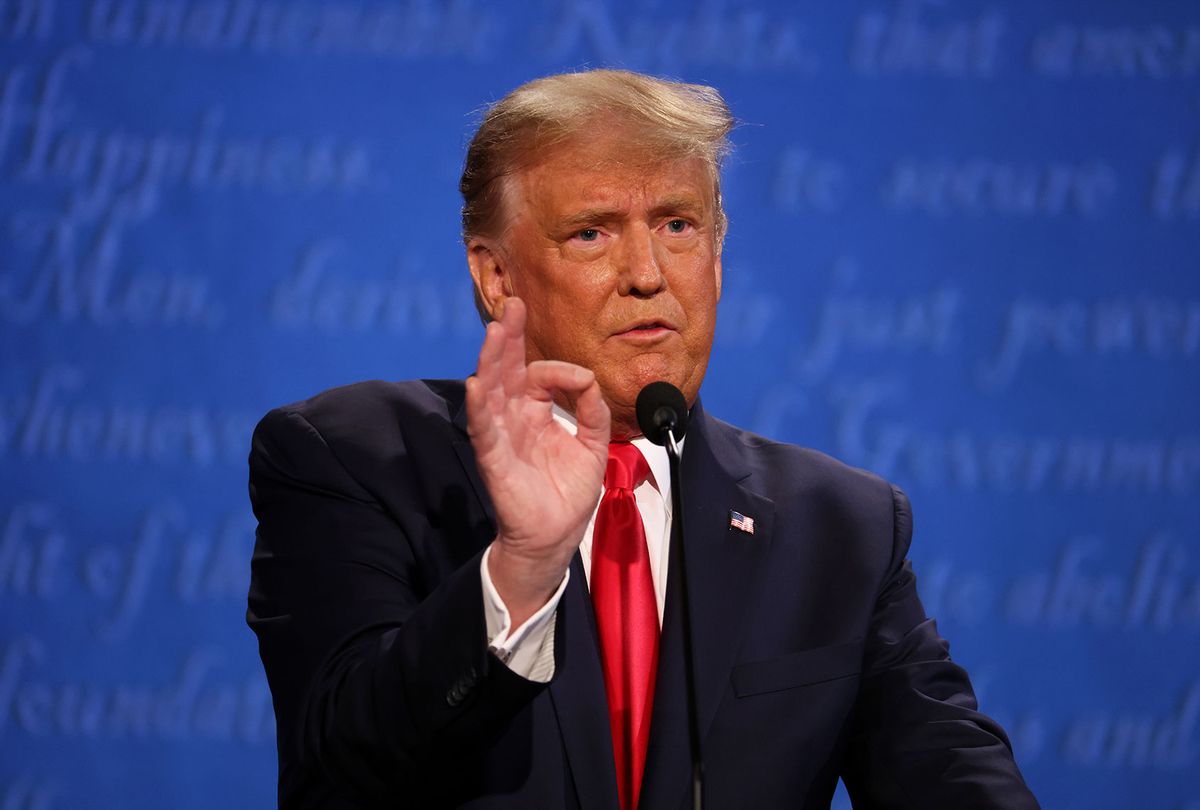 U.S. President Donald Trump participates in the final presidential debate against Democratic presidential nominee Joe Biden at Belmont University on October 22, 2020 in Nashville, Tennessee. This is the last debate between the two candidates before the election on November 3. (Justin Sullivan/Getty Images)
--

If you watched Donald Trump this past week, you might have expected him to show up for the final debate of the 2020 campaign on Thursday night as loaded for bear as he was in the first one. His rallies have been filled with scalding vitriol toward his political opponents and his Twitter feed has been nearly incoherent with rage. He seemed to be working himself up into a full-blown frenzy in anticipation of another Fight Club-style encounter with Joe Biden.

But Trump may have peaked a little early with his petulant interview with "60 Minutes" reporter Lesley Stahl on Wednesday and lost his mojo. He was so upset with Stahl's questions that he suddenly ended the interview and flounced out of the room like a sullen teenager. The next day he followed through on his threat to release a White House recording of the interview, reportedly made for archival purposes. Trump described Stahl's interview as a "vicious attempted 'takeout'" and offered this summary on Twitter: "Watch her constant interruptions & anger. Compare my full, flowing and 'magnificently brilliant' answers to their 'Q's'."

Since Trump apparently thought he'd done a great job with that dumpster fire of a first debate perhaps he thought releasing this interview would show him in the same light. It did. But it wasn't a good one.

After having insulted the moderator, Kristen Welker of MSNBC, in the days leading up to the final debate, it looked like he was gearing up for another showdown. But by the time he got to Nashville for the debate at Belmont University, he frankly seemed to be somewhat spent.

It's hard to know if all this was intentional as a sort of "tease" for the main event or if Trump just ran out of gas, but this debate was more or less civilized, at least in terms of his general demeanor. He was dour and hostile, of course, but he didn't interrupt too much and generally followed the rules. (Naturally this meant that observers on Twitter and elsewhere complimented him for his "discipline.")

The problem this time wasn't that his feral personality was on display. The problem was that when you actually got to hear the two candidates answer questions about policy without all the theatrics, it's clearer than ever that even after almost four years in office, Donald Trump still has no idea what he is doing. Even in his subdued state, he played his most obnoxious greatest hits without any awareness that they are stale, stupid and offensive.

Biden, on the other hand, was well-informed about policy, answered all the questions directly and showed himself to be a normal human being. After what we've been through with Trump, those banal qualities almost have a magical feeling to them.

Trump was, as usual, a serial liar. For a fact-checker, you're kind of sitting there with Biden. Occasionally you're like, "Oh, that's wrong." With Trump, you're like the "I Love Lucy" episode in the chocolate factory. You don't know which one to pick up because there's just so much.

Trump continues to "downplay" the pandemic and that couldn't be more objectionable than it is right now, as we face a surge in cases that may end being worse than the original surge last spring. He went into his usual litany of BS about closing the borders to China and the supposed 2 million deaths that he prevented by doing what he did. He claimed that Biden was itching to shut down the country, to which Biden retorted, "Shut down the virus, not the country."

Needless to say, Trump tried to get the phony Hunter Biden scandal into the debate since that was the real reason he even bothered to show up. He wasn't successful. None of it was intelligible and it all no doubt sounded like gobbledygook to anyone who isn't steeped in Breitbart-esque arcana. (And yes, it's exasperating for the most corrupt president in history to lob such accusations at anyone else.)

When he absurdly accused Biden of taking half a billion dollars from China as vice president, the exchange that followed perfectly illustrated the difference between the two men. Here's Biden:

My response is, look, there's a reason why he's bringing up all this malarkey. There's a reason for it. He doesn't want to talk about the substantive issues. It's not about his family and my family. It's about your family, and your family's hurting badly. If you're a middle-class family, you're getting hurt badly right now. You're sitting at the kitchen table this morning deciding, "Well, we can't get new tires. They're bald, because we have to wait another month or so." Or, "Are we going to be able to pay the mortgage?" Or, "Who's going to tell her she can't go back to community college?" They're the decisions you're making, and the middle-class families like I grew up in Scranton and Claymont, they're in trouble. We should be talking about your families, but that's the last thing he wants to talk about.

Come on, Joe. You could do better.

Trump's smug cluelessness about the concerns of everyday people came through again in the discussion of race, when he once again insisted that the had "done more for African Americans than anyone since Abraham Lincoln," adding that "there is no one in this room less racist than I am." (Moderator Kristen Welker is Black.)

Trump preened about passing prison reform and blasted Joe Biden for a "super-predator" comment he never made — that was Hillary Clinton — and for supporting the now-infamous 1994 crime bill. This, coming from the man who took out that odious full-page newspaper ad demanding the death penalty for the Central Park Five, is bad enough. But as Biden pointed out, Trump's been a big fan of putting more people in prison for a long time. This comes from "The America We Deserve," Trump's manifesto for his short-lived Reform Party presidential campaign in 2000:

We need to rethink prisons and punishment. The next time you hear someone saying there are too many people in prison, ask them how many thugs they're willing to relocate to their neighborhood. The answer: None.

President Law and Order can't have it both ways.

All in all, this was a fairly mundane affair by Trump standards. He managed to keep from turning it into a complete circus. But it may have actually hurt him with the voters. Instead of being shocked and appalled by the spectacle, they actually got to hear what he was saying. And that's much, much worse.

He seemed to realize that once it was over: