What "civil" debate? The one I watched revealed Donald Trump as a cold-blooded psychopath

A calmer tone only exposed Trump's lack of basic empathy about the pandemic, family separation or anything else 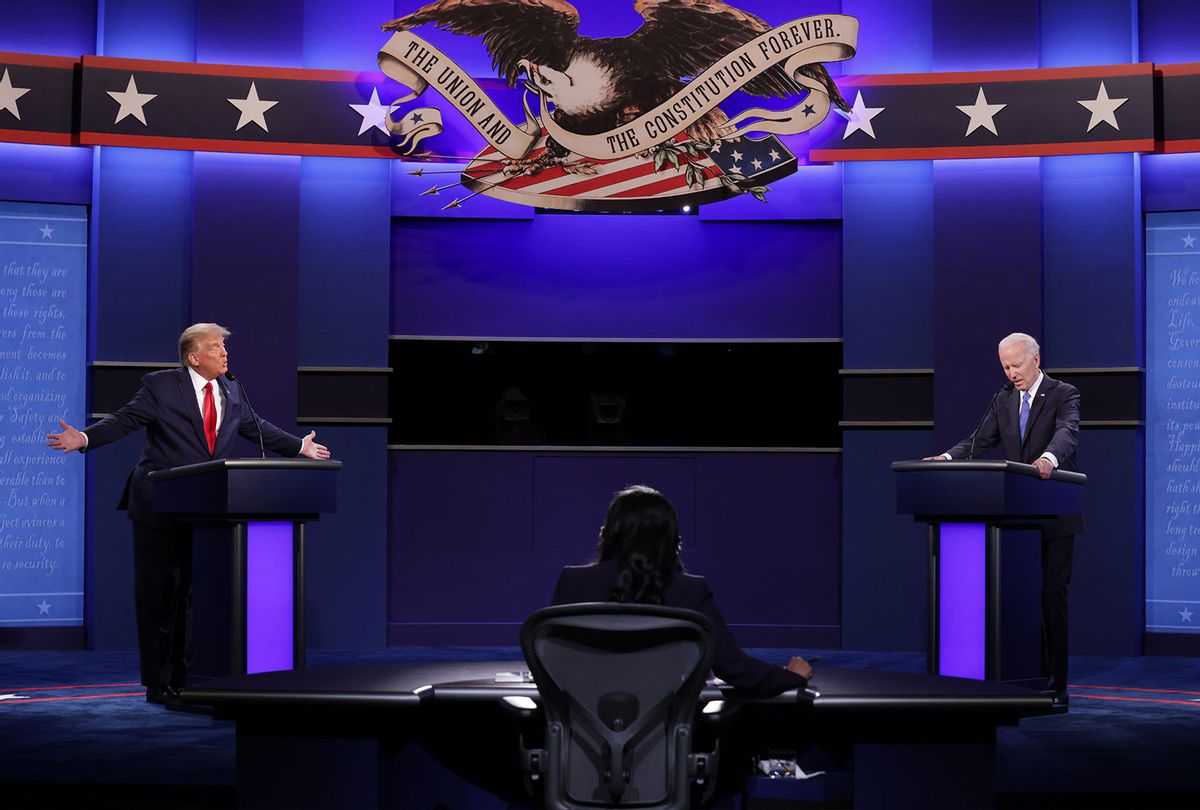 U.S. President Donald Trump and Democratic presidential nominee Joe Biden participate in the final presidential debate at Belmont University on October 22, 2020 in Nashville, Tennessee. This is the last debate between the two candidates before the election on November 3. (Chip Somodevilla/Getty Images)
--

The word on the media reviews for Thursday night's second — and blessedly last — debate of the presidential campaign is that it was civil.

"It was civil, calm, sedate, substantive (at times) and, almost, even normal," Shane Goldmacher at the New York Times writes.

"It came down to muting the president," Robin Givhan of the Washington Post writes. "That's what it took to stage a reasonably civil debate between President Trump and former vice president Joe Biden."

Deirdre Walsh at NPR declared the Nashville debate " a much different — and far more civil — night than the last encounter."

I don't know what debate these analysts were watching. Because the one I saw was between a normal politician, Joe Biden, and a man whose utter lack of empathy for any other human being is only matched by his baseless self-regard. The mute button only allowed Trump to speak at greater length, showcasing for all of America to see a textbook illustration of what sociopathy looks like. Afterwards, I wondered if Christian Bale had been watching, and if so, if he was worried that his star turn in "American Psycho" was too understated.

I know we've all grown numb to Trump's casual cruelty and his obvious inability to imagine that other people are fully real, but hot damn, it is incumbent on us who carry the dubious title of "journalist" not to let that numbness cloud our vision. There is something deeply wrong with that man. Anyone who listened — really listened — to him on Thursday night could see it.

Trump's sociopathic responses to human suffering started straightaway, when moderator Kristen Welker asked about future responses to the coronavirus, which has infected more than 8 million Americans and killed 223,000 as of Friday morning. Trump talked about the pandemic as if he were cheating at golf or trying to bully some hapless tenant into agreeing that there's nothing wrong with brown water coming out of the faucet.

"So as you know, 2.2 million people modeled out, were expected to die," Trump started, in a tone so casual one would think he was talking about the weather. He went on to claim the U.S. is doing better than most of the world with controlling the pandemic.

All of this is a lie, which is no surprise. That number of 2.2 fatalities was the absolute worst-case scenario, with no mitigation practices at all. It's much lower than that, no thanks to Trump — who proceeded to hype the no-mitigation strategy for the rest of the debate, even scoffing at the idea of plexiglass barriers — but because state and local officials and the American people stepped up to save ourselves.

Trump then proceeded to downplay the seriousness of the virus, bragging "I got better very fast" when he got COVID-19 and claiming that "99% of people recover." In fact, the death rate right now is 2.6% of diagnosed cases, and an unknown number of those who survive will have long-term health effects. He then proceeded to whine like a fourth-grader, literally proclaiming, it's "not my fault."

Imagine how this felt for people who have had someone close to them die, or who have themselves survived a near-death experience with COVID-19. I've personally had multiple people in my life become ill with this virus, and was wracked with worry about losing one of them. Trump's entire soulless diatribe, especially when he mentioned that his "young son" had the disease and "was fine," was profoundly disturbing. The man has no empathy, not even for his own family.

It went on like that all night. On every issue touching human suffering, Trump sounded like a callous jerk.

On the subject of family separations and the 545 immigrant children who are still separated from their parents after Trump instituted the policy that ripped thousands of families apart?

"They are so well taken care of. They're in facilities that were so clean," Trump said dismissively, as if forcibly orphaned children should be grateful to be allowed to take a shower.

He also took time to smear people who apply for legal immigration status, saying that only "those with the lowest IQ" show up to their mandatory court appointments.

In Trump's world, only idiots and fools obey the law. In a 2016 debate with Hillary Clinton, he famously made a similar claim, saying that his long history of tax evasion makes him "smart". This time around, there was more racism, along with the president's bizarre and fascistic obsession with eugenics.

When Welker asked the candidates to talk about the struggles of Black parents faced with the need to tell their kids that encounters with police can threat to their personal safety or their lives, Biden spoke empathetically about the difficulties of raising kids in a racist system. Trump just whined that he doesn't get enough praise for his generosity to Black people.

"I am the least racist person in this room," Trump whined, adding that he "took care of Black colleges and universities," in the same tone he probably uses when listing all the jewelry he's purchased for wives irate about yet another infidelity.

Biden was a welcome contrast all night, even when Trump was turning that sociopathic viciousness towards sneering at  the former veep's well-documented famil struggles. Much has been said about Biden's empathy and personal decency, but honestly, any human being without a severe personality disorder would come across as a mensch next to that sneering creep.

It may be that the loud, chaotic and disruptive aspects of Trump's personality are so annoying that they drown out what is actually most disturbing about the man, which is that he has no human feeling for other people. Or perhaps it's because the ideology of American conservatism at this point is so cruel and unfeeling that Trump seems like a natural fit with the 21st-century Republican Party. Possibly it's because the political culture of mandatory cynicism doesn't allow people to admit that they're weirded out by someone whose empathetic capacity is so busted.

Whatever the reason, it's remarkable how so many people have grown accustomed to sitting through that man's cold-blooded rants and callous affect and don't seem disturbed by it, as long as the volume is kept at a reasonable level.

But the truth is, without the yelling and headache-inducing interruptions, Trump's ruthless attitude towards any human being besides himself came through with crystalline clarity. There's nothing "civil" about a man who doesn't care about human suffering and death, and is only upset by the fact that he's not receiving the constant praise and flattery he believes is his due.