WATCH: Trump's latest attempt to get a foreign leader to attack Biden backfires in his face 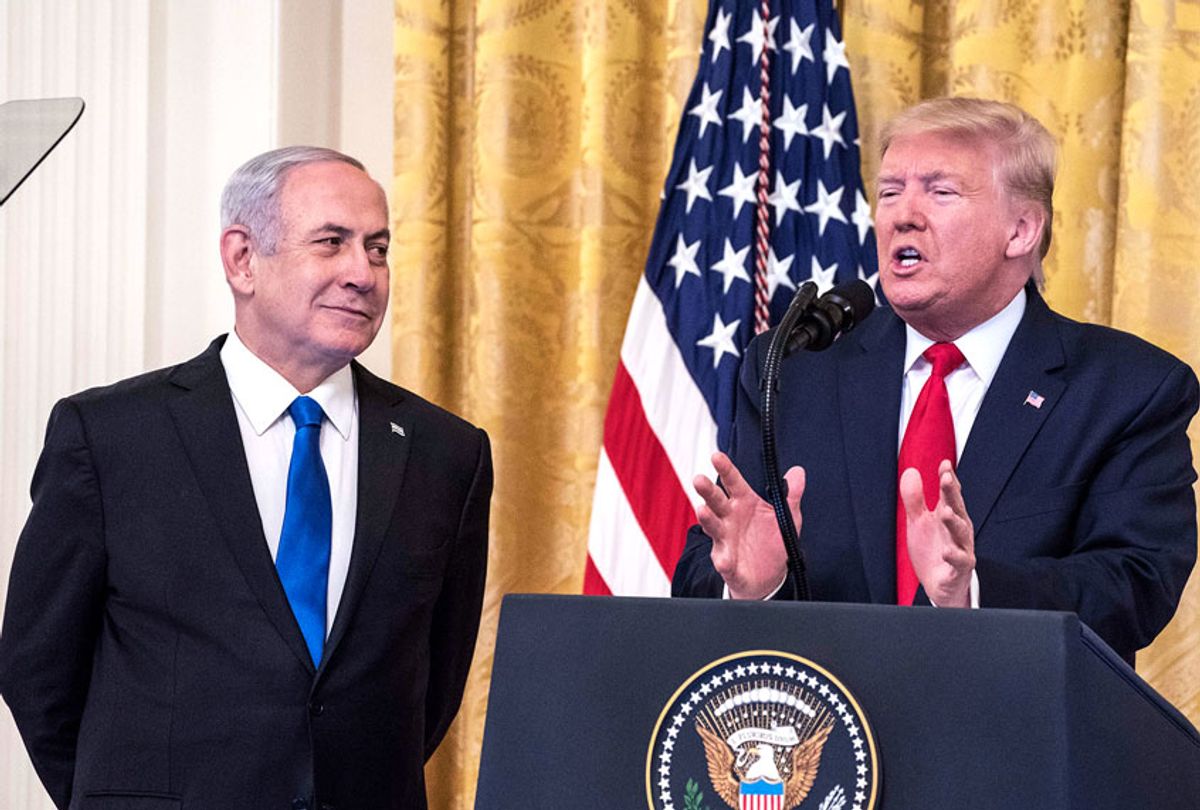 U.S. President Donald Trump and Israeli Prime Minister Benjamin Netanyahu participate in a joint statement in the East Room of the White House on January 28, 2020 in Washington, DC. The news conference was held to announce the Trump administration's plan to resolve the Israeli-Palestinian conflict. (Sarah Silbiger/Getty Images)
--

In a now-infamous phone call, President Donald Trump pressured Ukrainian President Volodymyr Zelensky to insert himself into American politics by announcing an investigation of his political rival, former Vice President Joe Biden. That call and the scheme surrounding it led to Democrats impeach Trump, alleging that he had corruptly leveraged his office and congressionally approved funds to benefit his own political campaign.

Trump appeared to be taking a shot at similar gambit, if on a much smaller and less elaborate scale, on Friday during a televised call with Israeli Prime Minister Benjamin Netanyahu.

While discussing a new plan for Israel to normalize relations with Sudan on speakerphone in front of reporters, Trump tried to goad Netanyahu into attacking Biden.

Of course, the ask wasn't as duplicitous or egregious as the on Trump made of Zelensky. It involved no withholding of military aid, and he was simply asking for Netanyahu to disparage his opponent, not open a criminal investigation of him. Still, it was wildly inappropriate and corrupt, both from the perspective of domestic and international politics.

And despite the fact that Netanyahu has made no secret for his preference for Republicans and his fondness for Trump in particular, the Israeli prime minister refused to bite on the president's bait. He pointedly avoided disparaging Biden.

"Well, Mr. President, one thing I can tell you is that we appreciate the help for peace from anyone in America," Netanyahu said. "And we appreciate what you've done enormously."

The smile dramatically fell from Trump's face, and he gave a deflated: "Yeah." It was clear he was disappointed that Netanyahu didn't join him in attacking Biden, which would have given him a de facto campaign ad with the endorsement of one of his favorite foreign leaders.

Many pointed out, though, that despite Netanyahu's fondness for Trump, he can read polling data as well as anyone. And the polling quite clearly indicates that Biden is heavily favored to win in the 2020 election. Netanyahu is likely to have a more fraught relationship with Biden regardless, but he wisely doesn't want to intentionally aggravate the Democrat in the last days of an election.

Netanyahu seemed to try to make up for the disappointment his remarks surely caused by adding: "This will be registered in the history books. History registers who did what, I think it does." But the damage was done.