What water on the moon means for the future of exploration 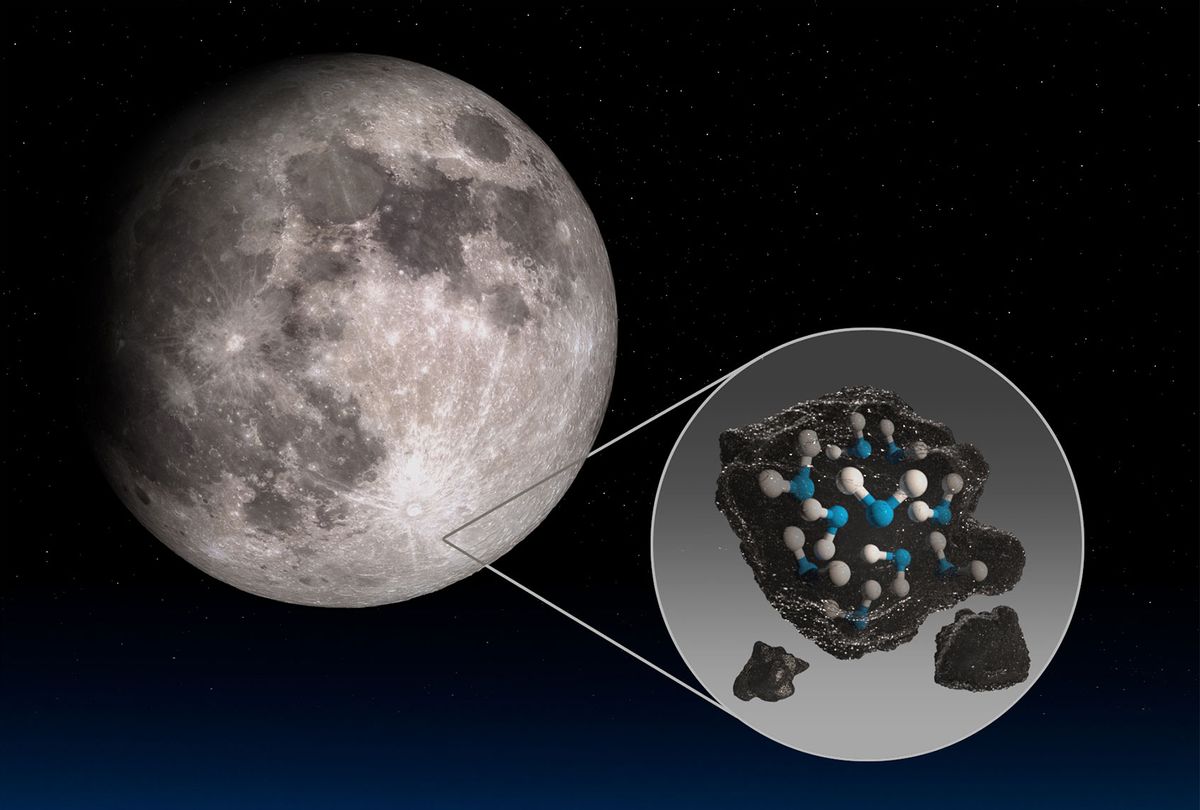 This illustration highlights the Moon’s Clavius Crater with an illustration depicting water trapped in the lunar soil there, along with an image of NASA’s Stratospheric Observatory for Infrared Astronomy (SOFIA) that found sunlit lunar water. (NASA/Daniel Rutter)
--

Earth news is a bit anxiety-provoking these days, which might be one reason why the Internet pulled out all the stops to communicate collective enthusiasm over the discovery of vast amounts of water on the moon.

The finding could be useful to humans who want to leave Earth immediately and live on the moon. (We're only half-joking).

While scientists previously suspected that water existed in the shadowy, cold parts of the moon — such as its poles, where it would stay frozen — a pair of studies published on Monday in the journal Nature Astronomy confirm that there is a large amount of water on its sunlit regions, too.

"We had indications that H₂O – the familiar water we know – might be present on the sunlit side of the Moon," Paul Hertz, director of the Astrophysics Division in the Science Mission Directorate at NASA Headquarters in Washington, said in a statement. "Now we know it is there. This discovery challenges our understanding of the lunar surface and raises intriguing questions about resources relevant for deep space exploration."

Yet even the data on water in the moon's darker, colder regions was always iffy. Part of the challenge of finding water on the moon is that the Earth's atmosphere, which has plenty of evaporated water, interferes with ground-based attempts to see water on the moon without the atmosphere interfering. Space telescopes or very high altitude telescopes can alleviate this problem. In this case, NASA used the Stratospheric Observatory for Infrared Astronomy (SOFIA), an infrared observatory mounted on a Boeing 747 airplane, which takes observations from the air. SOFIA data suggests strongly that yes, water is present on the sunlit surface of the moon.

That's particularly unusual given the temperature cycles on the moon: the moon during the day is a scalding 250 degrees Fahrenheit, well above water's boiling point. So why doesn't said water immediately evaporate? As explained in the study, titled "Molecular water detected on the sunlit Moon by SOFIA," scientists detail evidence that hypothesizes the water observed may be trapped in naturally-formed glass on the moon's sunlit regions. Being encased in glass means that the water is impervious to the heating and cooling cycles that would usually evaporate the water. Since the moon doesn't have an atmosphere and there's very little gravity, it's impossible for water to just hang out on its surface like it does here on Earth.

The second study, titled "Micro Cold Traps on the Moon," catalogs all the potential sites that are cold enough for ice to remain stable, and where water could exist without being trapped in glass.

"Our results suggest that water trapped at the lunar poles may be more widely distributed and accessible as a resource for future missions than previously thought," the authors state.

To put the discovery into context, NASA says that the Sahara Desert has 100 times the amount of water than what was detected on the moon's surface.

Intriguingly, it turns out that there is no shortage of potential places where water could exist on the moon without being trapped in glass. According to the study, the moon's southern polar region may hold nearly 40,000 square kilometers of lunar surface with water ice.

These studies are changing the way scientists look at the moon. Perhaps it is more than a dark, dry, and rocky place.

"Without a thick atmosphere, water on the sunlit lunar surface should just be lost to space," Casey Honniball, a lead author of one of the studies, said in a statement. "Yet somehow we're seeing it. Something is generating the water, and something must be trapping it there."

According to NASA there are a few ways the water could be stored— in either "beadlike structures in the soil," or "hidden" between "grains of lunar soil and sheltered from the sunlight."

So, what does this all mean for moon colonization? Well, it might not mean that humans can move there once climate change gets us. But it does mean that NASA astronauts could perhaps spend significantly more time on the moon before needing to come home for a resupply.

"The existence of significant amounts of water on the lunar surface can be helpful for establishing a sustainable base there in the context of NASA's Artemis program with its international partners," Avi Loeb, chair of Harvard's astronomy department, told Salon via email. "This will be the first step in advancing humanity to more distant destinations, such as Mars and beyond."

Loeb added: "There is no doubt that our future lies in space, not only for national security and commercial benefits but mainly for scientific exploration aimed at opening new horizons to our civilization."