Trump and Biden on the biggest climate question: What kind of energy transition lies ahead?

A historic energy transition is here: Coal is dying and oil will soon follow. How we manage this change is critical 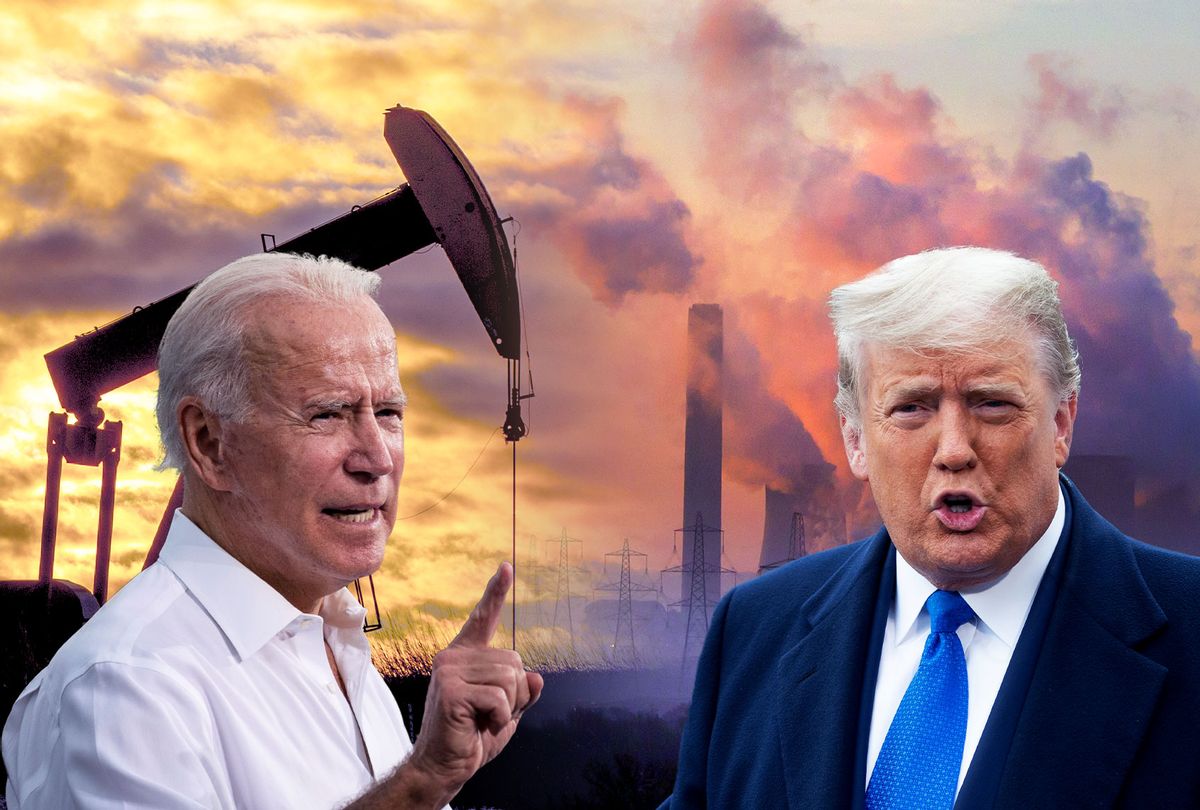 Last week's final presidential debate ended with a revealing split between Donald Trump and Joe Biden on climate policy. But most of the media coverage is missing the real story, because the media ignores what is already happening in the economics of the energy sector.

Biden was clear that he isn't going to ban fracking or shut down the oil industry. He mentioned ending new drilling on public lands and shutting down subsidies for coal, oil and gas. And he said we would transition away from oil —that it would take decades, but that we need to replace fossil fuels with renewables because of the climate threat. He mentioned some of the tools he'd use to speed the transition: funding 50,000 EV charging stations and beginning the retrofitting of leaky, polluting buildings.

Trump, as he did in 2016, offered himself as a successful King Canute, and implied he had stopped the tide and effectively shut down the transition away from coal and oil. (Canute knew better — one wonders if Trump has a clue.) He pointed to his withdrawal from the Paris agreement as having saved tens of trillions of dollars. (Fact check: We haven't actually withdrawn ,and won't until Nov. 4.)  Trump said Biden's plan would cost $100 trillion, an entirely made up statistic. He proclaimed that he had "saved" the oil industry, and that as a result, "They're making a tremendous amount of money."

In reality, Biden and Trump's policies would take the U.S. energy sector in very different places — but not in the ways the debate, or media coverage of the debate, might imply.

Trump has not saved the oil industry, any more than he saved the coal jobs he promised in 2016. The U.S. shale sector is unlikely ever again to pump as much crude as it did in 2019. After all, even with high oil prices, it lost hundreds of billions of dollars sustaining those levels during the Trump years. The iconic symbol of Trump's U.S. "energy dominance," ExxonMobil, has lost two-thirds of its market value since Trump took office. Oil companies have shed 100,000 jobs and their rig count continues to fall. If the "very inexpensive gasoline" Trump boasted of during the debate continues, those jobs will never return, and the U.S. oil industry will be headed down the pathway coal took during the past decade, even if Trump is elected to a second term. Investors are already fleeing the sector.

The reason is quite simple. Renewables are getting cheaper than oil, as they already are cheaper than coal. As a result, global demand for oil either has peaked, or shortly will, a reality recognized by voices as diverse as BP, Shell and the International Energy Administration. As consumption flattens and then declines, oil prices will remain stubbornly below the $60-per-barrel range required for profitable expansion of U.S. oil production. Exxon, the most bullish of the major oil companies on future demand and prices, concedes that 20% of the oil currently carried on the industry's books is never going to be profitably pumped.

What will be needed — indeed, for decades, as Biden said, although in diminishing quantities — is cheap oil, the kind owned by the Saudis, the Iraqis, the Iranians and Russia, oil that can be profitably pumped at today's $40-$50 prices. Major oil companies own huge legacy reserves of such affordable oil, but have no prospect of replacing those reserves as they sell them off. They are either going to shrink and follow many of the independent companies into bankruptcy, or they will have to transition, as BP and Shell have begun exploring, into companies that sell energy — mostly renewable energy — rather than just oil.

Demand for oil will shrink faster as electric cars and trucks replace internal combustion pollution. Europe, China and half of the U.S. vehicle market are already committed to such a transition. It will happen globally, even if Trump is re-elected, just as his first election did not prevent renewables from replacing coal in states as friendly to Trump's policies as Oklahoma.

We will transition off oil. That's not a debating point to be decided next week. It's a market reality already well underway.

So does it matter who wins? Hugely. Because there are two ways to transition off oil. One is a planned transition, with strategic investments aimed at making sure that as renewables replace fossil fuel, the U.S., not China or Europe, does indeed develop green energy leadership. These investments in clean energy need to be matched with investments in fossil fuel-dependent regions and communities, so that North Dakota, after the end of the Bakken oil boom, isn't devastated as West Virginia has been by the collapse of coal under Trump's stewardship.

That's the pathway Biden has been figuring out and would prefer. We know Trump's pathway — we've seen it in action in the coal fields already. Lots of subsidies for the owners and shareholders in these companies, no planning for a transition or economic diversification, and no attention whatsoever to workers, families and communities.

Given the economic realities — fossil fuels have no economically competitive future, and clean energy is cheaper almost everywhere — it is Biden's approach which constitutes, to paraphrase Politico, attractive "climate dessert," whereas Trump's is "climate spinach" — or, more realistically, cod liver oil, particularly for the regions and stakeholders who currently depend on coal, oil and gas.

But commentators would rather tell yesterday's story, in which we are debating whether to make a shift from fossil fuel to clean energy, rather than today's reality: How do we manage our way through it, and ensure that we come out far more prosperous than we went in?

We are in the middle of a historic energy transition. Do we want national leadership to make it as smooth and fair as possible? Or do we want a repeat of the collapse of coal — or, for that matter, the coming of the coronavirus?