Sprites, "spectacular flashes of light" high in the atmosphere, have been seen on another world for the first time 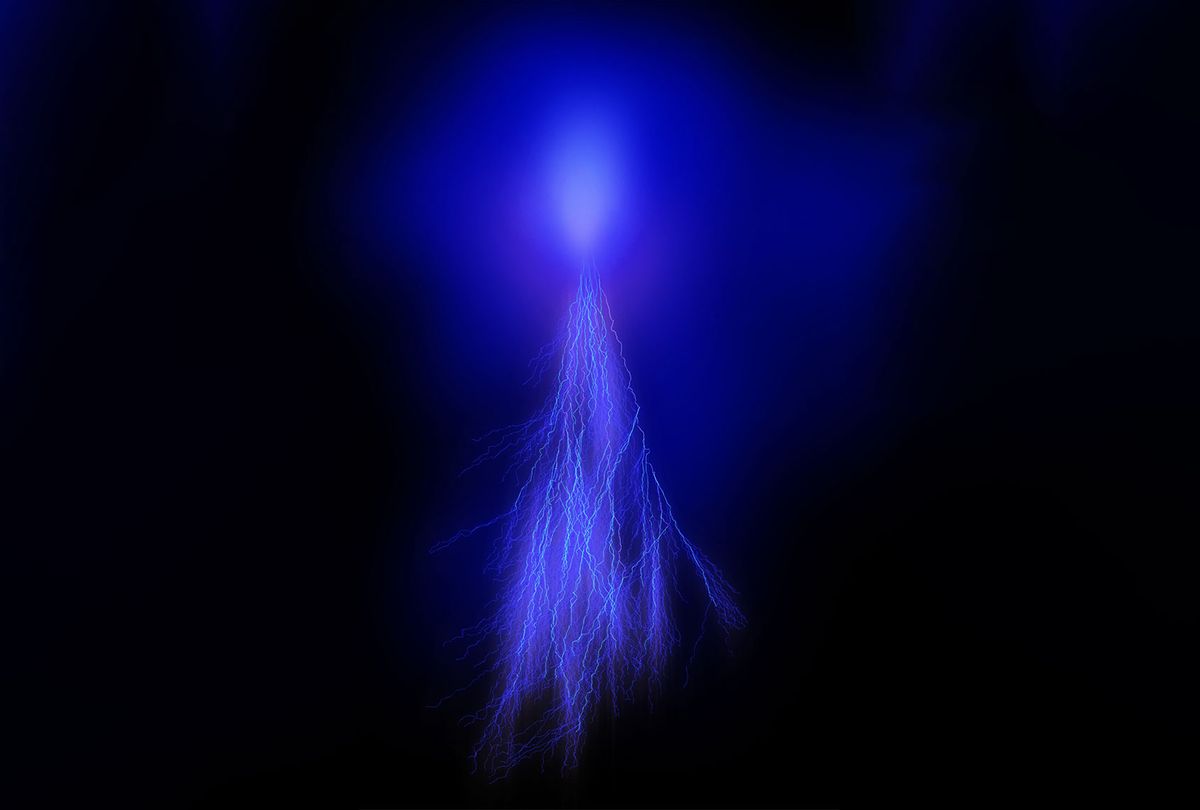 This illustration shows the lightning phenomenon known as a sprite and what a sprite could look like in Jupiter's atmosphere. Named after a mischievous, quick-witted character in English folklore, sprites last for only a few milliseconds. They feature a central blob of light with long tendrils of light extending down toward the ground and upward. (NASA/JPL-Caltech/SwRI)
--

Ghosts and spirits are common sights on Earth the week of Halloween, but it turns out apparitions appear exist on other planets too. (No, we're not talking about aliens).

According to a new study published in the Journal of Geophysical Research: Planets, NASA's Juno spacecraft orbiting Jupiter saw sprites or "elves" are "dancing" in the upper atmosphere of the planet. In English folklore, sprites are supernatural quick-witted characters. In the natural world, sprites are unpredictable, bright, brief flashes of light—formally known as transient luminous events (TLEs). ELVES, or Emission of Light and Very low Frequency perturbations due to Electromagnetic pulse Sources, are a kind of TLE — bright and quick flashes of light. TLEs appear in Earth's skies very rarely, but this is the first time they've been observed on another planet.

"We suggest that these are elves, sprites or sprite halos, three types of TLEs that produce spectacular flashes of light very high in the Earth's atmosphere in response to lightning strikes between clouds or between clouds and the ground," the researchers stated in the paper. "TLEs have previously only been observed on Earth, although theoretical and experimental work has predicted that they should also be present on other planets, including Jupiter."

On Earth, this phenomenon usually happens about 60 miles above large thunderstorms. The light from sprites can span 15 to 30 miles. It's quite a light show, though they last only milliseconds. Some observers have remarked that they resemble jellyfish in the sky.

The Jupiter discovery was unexpected, made by the Juno spacecraft's ultraviolet spectrograph instrument (UVS), which observes ultraviolet light on the planet. According to the paper, 11 transient bright flashes were detected.

"UVS was designed to characterize Jupiter's beautiful northern and southern lights," Rohini Giles, a Juno scientist and the lead author of the paper, said in a statement. "But we discovered UVS images that not only showed Jovian aurora, but also a bright flash of UV light over in the corner where it wasn't supposed to be. The more our team looked into it, the more we realized Juno may have detected a TLE on Jupiter."

Scientists long suspected that sprites and elves occurred on Jupiter. Juno's UVS instrument observed the bright flashes in a region where large lightning thunderstorms are known to occur.

Scientists hope studying these flashes on Jupiter will help improve our understanding of other planets' atmospheric phenomena.

"We're continuing to look for more telltale signs of elves and sprites every time Juno does a science pass," Giles told CNN. "Now that we know what we are looking for, it will be easier to find them at Jupiter and on other planets. And comparing sprites and elves from Jupiter with those here on Earth will help us better understand electrical activity in planetary atmospheres."