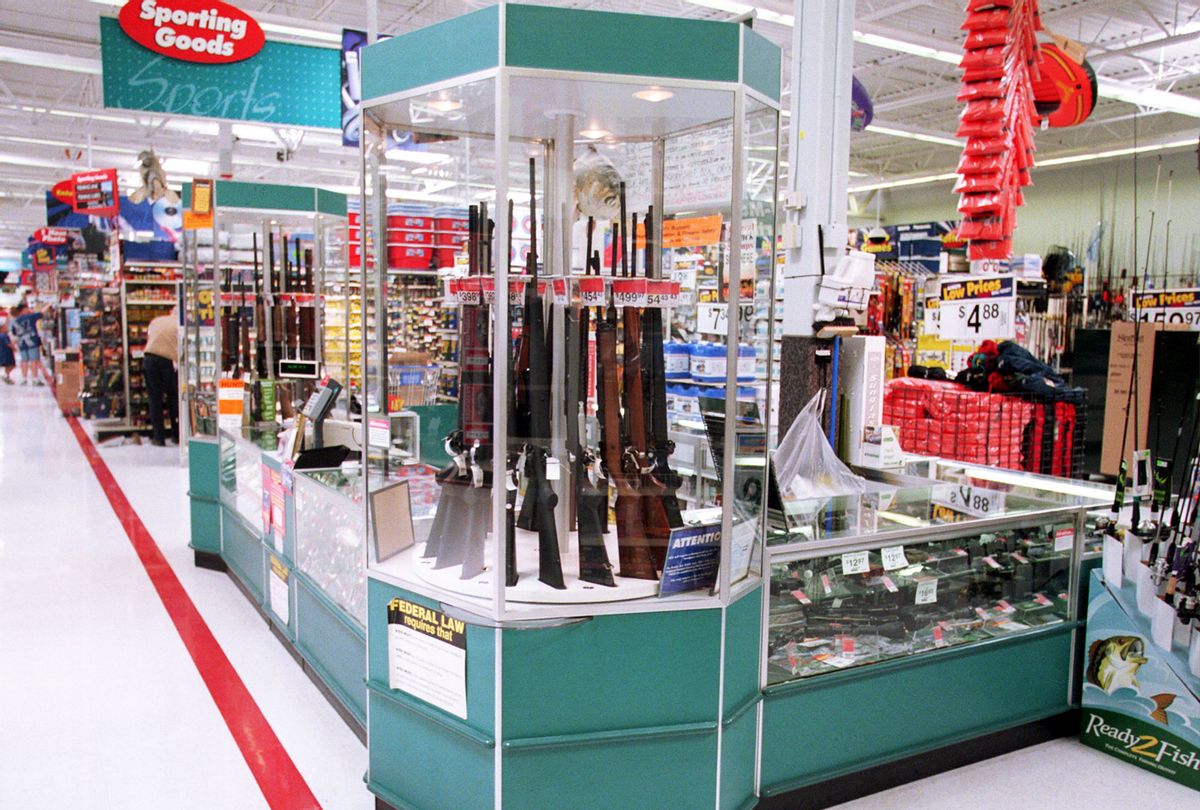 Walmart said it has pulled guns and ammunition from its U.S. store due to concerns about "civil unrest."

"We have seen some isolated civil unrest, and as we have done on several occasions over the last few years, we have moved our firearms and ammunition off the sales floor as a precaution for the safety of our associates and customers," a Walmart spokesman told The Wall Street Journal.

Even though the firearms won't be appearing in store displays, Walmart customers will still be able to purchase them, according to the report. The discount retailer currently sells firearms in about half of its stores across the country.

It is unclear how long the weapons will remain hidden from view.

In a letter to store managers on Wednesday, the retail giant reportedly asked employees to remove guns from displays "due to the current unrest in isolated areas of the country and out of an abundance of caution."

The retailer previously pulled guns and ammunition from stores amid protests over the killing of George Floyd in police custody in Minneapolis earlier this year.

The company previously stopped selling some ammunition after a shooting at a Walmart left 23 dead and 23 more injured in El Paso, Texas. It also raised the minimum age to buy guns and ammunition to 21 after a school shooting in Parkland, Fla.

The decision to remove guns comes amid protests in Philadelphia over the fatal police shooting of Walter Wallace Jr. by officers responding to a call for medical help. One Philadelphia Walmart location was looted, and torn boxes of ammunition were seen littered around the store, according to CBS Philly.

Gun sales have skyrocketed amid the coronavirus pandemic. An analysis by the Brookings Institution found that gun sales jumped from 92,000 per day to more than 120,000 per day after the Trump administration declared a national emergency in March.

The National Shooting Sport Foundation, which tracks gun background checks, reported that a record 12.1 million people went through the FBI background check system between January and July, a 72% increase from last year.

Walmart's move also comes amid concerns over unrest surrounding next week's elections. Governments and companies alike are preparing for the worst.

California Gov. Gavin Newsom, a Democrat, told Politico that the state was preparing for potential unrest after polls close and "gaming out different scenarios and making sure that we are prepared."

"I am not sure what the reason might be for unrest, but if there is, we have been preparing for it,"  he said during a Thursday news conference.

Arizona Gov. Doug Ducey, a Republican, said he would not "hesitate" to deploy the Arizona National Guard in the event of potential "civil unrest."

Some businesses are also making preparations. Many storefronts have already been boarded up in cities like Chicago, Portland and Washington, according to USA Today.

Facebook CEO Mark Zuckerberg said the social network was also planning "to go well beyond what we've done before" in the event of "civil unrest."

Some human rights groups that work to resolve conflicts surrounding overseas elections have turned their attention to the U.S.

"We thought we were immune to it," Tim Phillips, the founder of Beyond Conflict, a group that works in divided societies like South Africa and Northern Ireland, told NPR. "When we looked at our own problems, we thought: 'Of course, we have some big issues, but we're in a sense immune from an us-versus-them mindset, a sectarian mindset, where there could be real conflict.'"

Hrair Balian, the director of the Conflict Resolution Program at The Carter Center, which focuses on ensuring fair elections overseas, said the concerns in the U.S. mirror those in nations with deep conflicts.

"I never imagined that in this country, I would worry about the same things that I was worried about when I lived in Lebanon," he told NPR. "What we fear is that guns, protests and elections do not mix well."