Could this "army of environmental super voters" sway swing states? 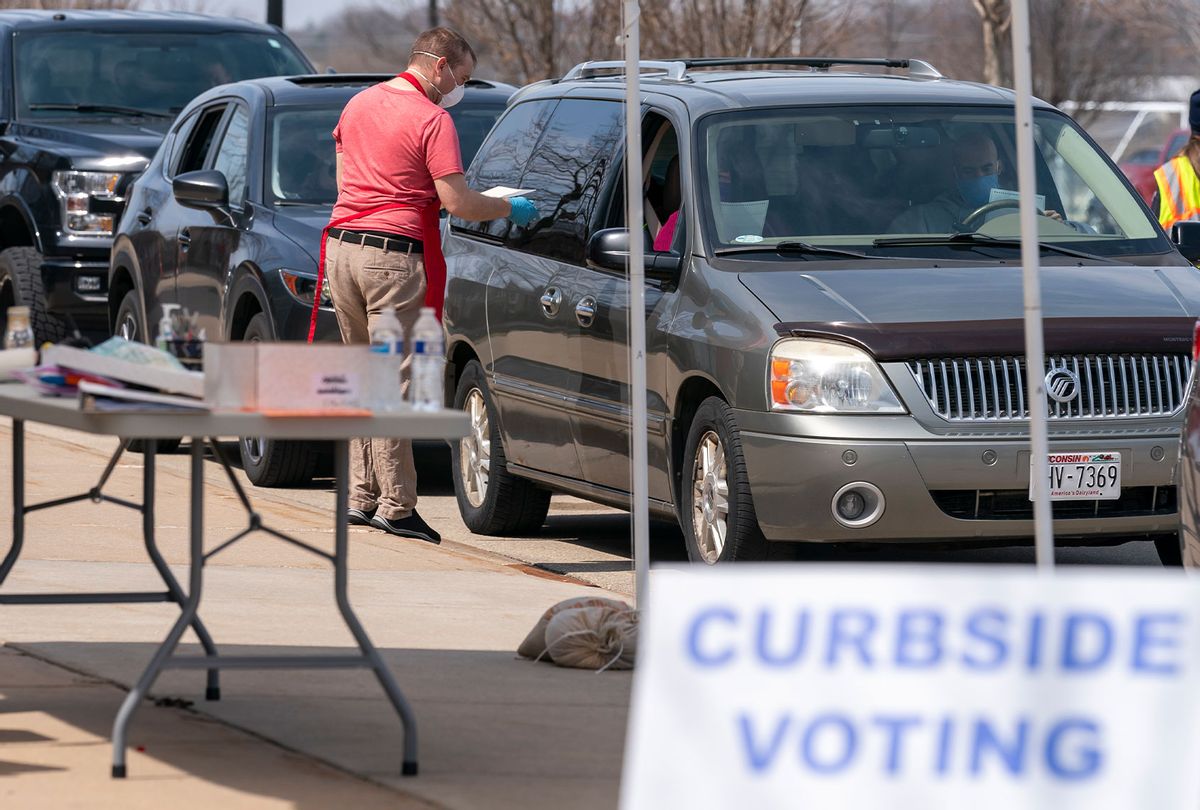 A poll worker talks to people during curbside voting on April 7, 2020 in Sun Prairie, Wisconsin. Residents in Wisconsin went to the polls a day after the U.S. Supreme Court voted against an extension of the absentee ballot deadline in the state. Because of the coronavirus, the number of polling places was drastically reduced. (Andy Manis/Getty Images)
--

As Election Day approaches, many Americans are casting their ballots early: More than 75 million voters have already signed their envelopes or showed up at polling places. One group in particular has been turning out in droves — voters who care a whole lot about climate and the environment.

According to data from the nonpartisan Environmental Voter Project provided exclusively to Grist, 20 percent of early ballots cast in key battleground states like Arizona and North Carolina come from eco-conscious voters, those identified as likely to choose climate or the environment as a top priority. That's almost 4.8 million voters in 11 states, a surge that could tilt the outcome of the presidential election. In Flo

And thousands of those votes came from people who have rarely — or never — voted before. In Florida, for example, the organization reports that over 116,000 previously disengaged environmentalists have already cast their ballots; Trump won that state in 2016 by around 131,000 votes. In Pennsylvania, which Trump won by 44,000 votes, almost 35,000 environmentalists who rarely or never vote have turned out.

The Environmental Voter Project has been tracking environmental voters in several states since 2017, when Stinnett vowed to build "an army of environmental super voters" that could rival the National Rifle Association. The group maintains a database of voters who, based on polling and modeling, it considers likely to put the environment or climate change as their top priority — but who neglect to vote in most elections.

Volunteers then drop off flyers, send text messages, or knock on doors, encouraging them to vote without ever mentioning the environment. In 2018, the organization coaxed over 58,000 unlikely voters to turn out for the midterms; since then, it has expanded to six additional states.

Now, Stinnett sees evidence that this could be a banner year for the eco-friendly vote. According to an NPR poll of likely voters last month, 12 percent of Americans say climate change is the "most important issue" to them in the 2020 election, compared to just 2 percent in 2016. (The catastrophic wildfires, worldwide climate strikes, and terrifying scientific reports might have something to do with it.) The Environmental Voter Project is currently targeting around 1.8 million voters across 12 swing states. As of Wednesday morning, voter data indicated that 360,000 of those targets had cast their ballots already.

"By definition, these people are really, really unlikely to vote," Stinnett said. "And the fact that they have not just already voted, but voted early is — it's really extraordinary."

These aren't just granola-loving environmentalists, either: According to the group, most of their target audience are young Black and Latino voters who make less than $55,000 a year, although there are many exceptions. Getting these voters to the polls is crucial, Stinnett argues, in getting politicians to pay attention to climate change.

"We don't expect Ford Motor Company to care what 3-year-olds think about their cars," he said wryly. "Politicians focus on the priorities of voters." If climate voters show up, he says, politicians will respond to their needs and priorities; if they don't, they'll be ignored.

Stinnett will get a sense of how much his group's efforts have galvanized green voters after the election. (The organization conducts randomized-control trials after each race to see whether their volunteers helped push people to the polls.)

And Stinnett says that his goals go beyond one election cycle: His top priority is making sure that environmentalist voters cast their ballots this year, and the year after that, and the year after that. After someone has voted in several elections in a row, EVP considers them "graduates"; they've moved from "unlikely" to "likely" participants in democracy. Over the past few years, the project has "graduated" some 253,000 voters — meaning that it can now focus its attention on other, even more hesitant voters.

"If we start showing up," Stinnett said, "it will be impossible to stop the climate movement."

rida alone, almost 1.3 million environmentalists have turned out; Virginia, North Carolina, and Pennsylvania have each seen over half a million green votes cast.

"These numbers are starting to get too big to ignore," said Nathaniel Stinnett, the Environmental Voter Project's founder and director (and member of the Grist 50class of 2016). "It's the cresting of a green wave."