After the all-GOP Texas Supreme Court rejected the suit, the case goes to a "staunchly conservative" federal judge 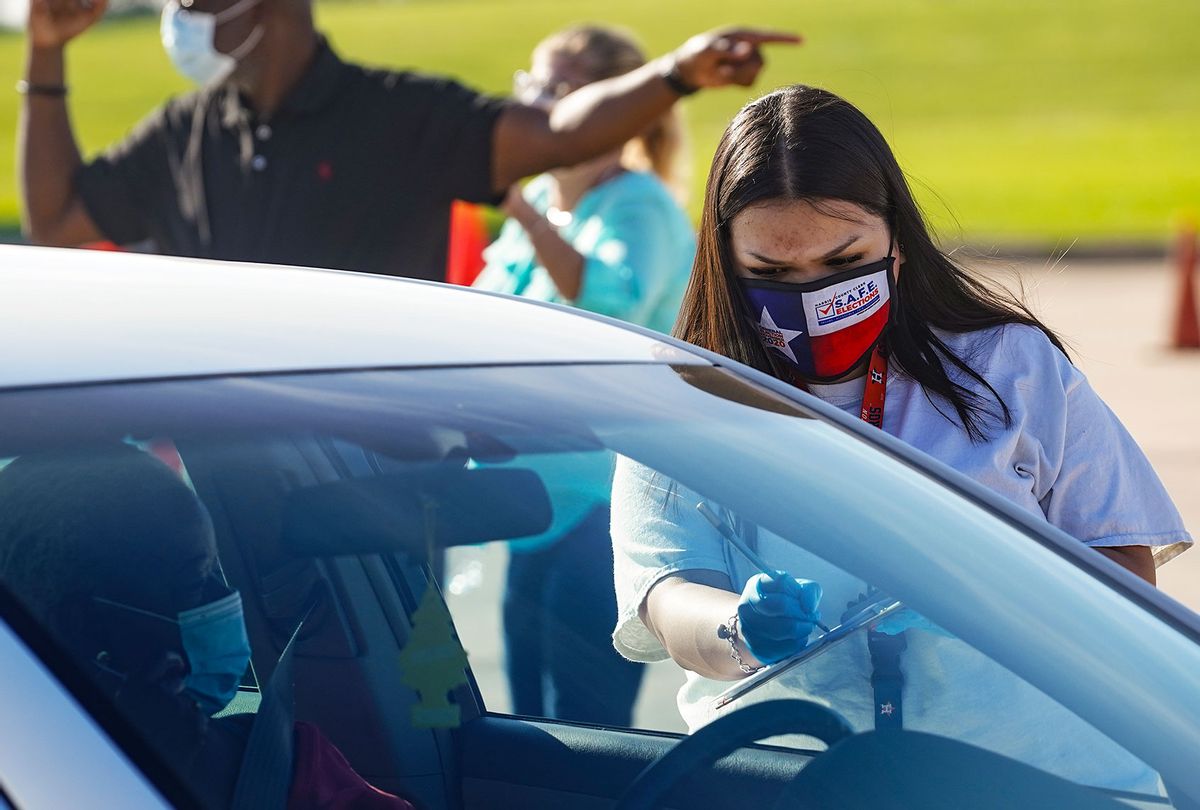 An election worker accepts mail in ballot from a voter at drive-through mail ballot drop off site at NRG Stadium on October 7, 2020 in Houston, Texas. Gov. Gregg Abbott issued an executive order limiting each Texan county to one mail ballot drop-off site due to the pandemic. (Go Nakamura/Getty Images)
--

Update: Judge Andrew Hanen rejected the Republican lawsuit on Monday afternoon, finding that the plaintiffs did not have the standing to sue.

"I'm not happy with that finding," he said. "But the way I look at it, the law requires it."

The Republicans who brought the suit may still appeal the decision, but Steve Vladeck, an election law expert at the University of Texas at Austin, argued it was unlikely that an appellate court or the Supreme Court would intervene given Hanen's finding.

Hanen said that if the 5th Circuit Court of Appeals reverses his finding, he would deny the request to throw out votes that were already cast but agree to ban the use of drive-through voting sites on Election Day, according to BuzzFeed News' Zoe Tillman.

U.S. District Court Judge Andrew Hanen will hear a case on Monday brought by three Republican candidates and a conservative activist arguing that drive-through voting locations set up amid the coronavirus pandemic were an illegal expansion of curbside voting, which is restricted to voters with illnesses or disabilities, Politico reported.

The Republicans are seeking a court order to invalidate nearly 127,000 ballots cast in the county, which Hillary Clinton carried by 12 points in 2016, as well as a ban on drive-through voting locations on Election Day.

The case comes after the all-Republican Texas Supreme Court on Sunday rejected the same petition without issuing an opinion. But the assignment of the lawsuit to Hanen, a "staunchly conservative" appointed by former President George W. Bush who previously ruled against former President Barack Obama's expansion of the Deferred Action for Childhood Arrivals (DACA) program, prompted concern among Democrats, according to Politico.

Attorneys for Harris County Clerk Chris Hollins, a Democrat, argued that it would undermine the election to toss out more than 125,000 ballots cast by voters under the rules they were given.

"There are more than 125,000 horses out of the barn," they said in a court brief. "These voters cast ballots for candidates of both political parties in good-faith and justified reliance on the legality of the drive-through polling places."

The Republicans also asked Hanen in the lawsuit to segregate the drive-through ballots from other ballots so their legality can be determined later.

Hollins' attorneys said such a move would undermine voter confidence.

"They would be left to wonder whether their votes would be counted," they said in the brief. "Confidence in the democratic process would be shaken."

The lawsuit, led by Jared Woodfill, the former chairman of the Harris County GOP, argued that counting ballots cast at drive-through locations would "call into question the integrity and legality of a federal election" and complained that the locations were set up "in Democrat areas of the county."

Secretary of State Ruth Hughs, a Republican, signed off on the drive-through locations back in June. Hollins previously asked Gov. Greg Abbott, a Republican, to affirm that the drive-through locations were legal but received no response. Abbott limited ballot drop-off boxes to only one per county, including in massive counties like Harris, which has nearly 5 million residents. Texas is one of only five states which did not expand its mail-in voting system amid the coronavirus pandemic.

"This is simply an un-American attempt to disenfranchise voters," Hollins told NPR.

Some Republicans in the state slammed the effort, as well.

"I hope all elected statewide leaders in the Texas Republican Party will stand up against these desperate tactics," former Texas House Speaker Joe Straus said, calling the effort "patently wrong."

The Texas case is the latest effort by Republicans to throw out votes cast by perfectly valid voters.

Republicans in Pennsylvania and Minnesota are suing to throw out votes that were sent and postmarked before the election but do not arrive until several days later. A federal appeals court ordered Minnesota to segregate late-arriving ballots, and Pennsylvania has also agreed to segregate late-arriving ballots. Though the Supreme Court denied a Republican petition for an expedited hearing on the Pennsylvania case, conservative Justice Samuel Alito appeared to leave the door open to invalidating votes after the election.

"The court's denial of the motion to expedite is not a denial of a request for this court to order that ballots received after Election Day be segregated so that if the State Supreme Court's decision is ultimately overturned, a targeted remedy will be available," he wrote.

Slate's Mark Joseph Stern noted the case was likely to fail. Whichever way Hanen rules, the decision will be appealed to the 5th Circuit Court of Appeals.

"Thanks to President Donald Trump, the 5th Circuit is one of the most extreme and partisan appeals courts in the country and an avowed enemy of voting rights," he wrote. "Its members may be eager to seize upon this case to prevent Joe Biden from carrying Texas. At that point, only the U.S. Supreme Court could end Republicans' mischief. And SCOTUS' ultraconservative bloc has already expressed its zeal to throw out as many Democratic ballots as possible under the theory that only legislatures get to run elections."