Trump's trying to intimidate liberals with violence. The good news: Most of his fans are too cowardly to act on it 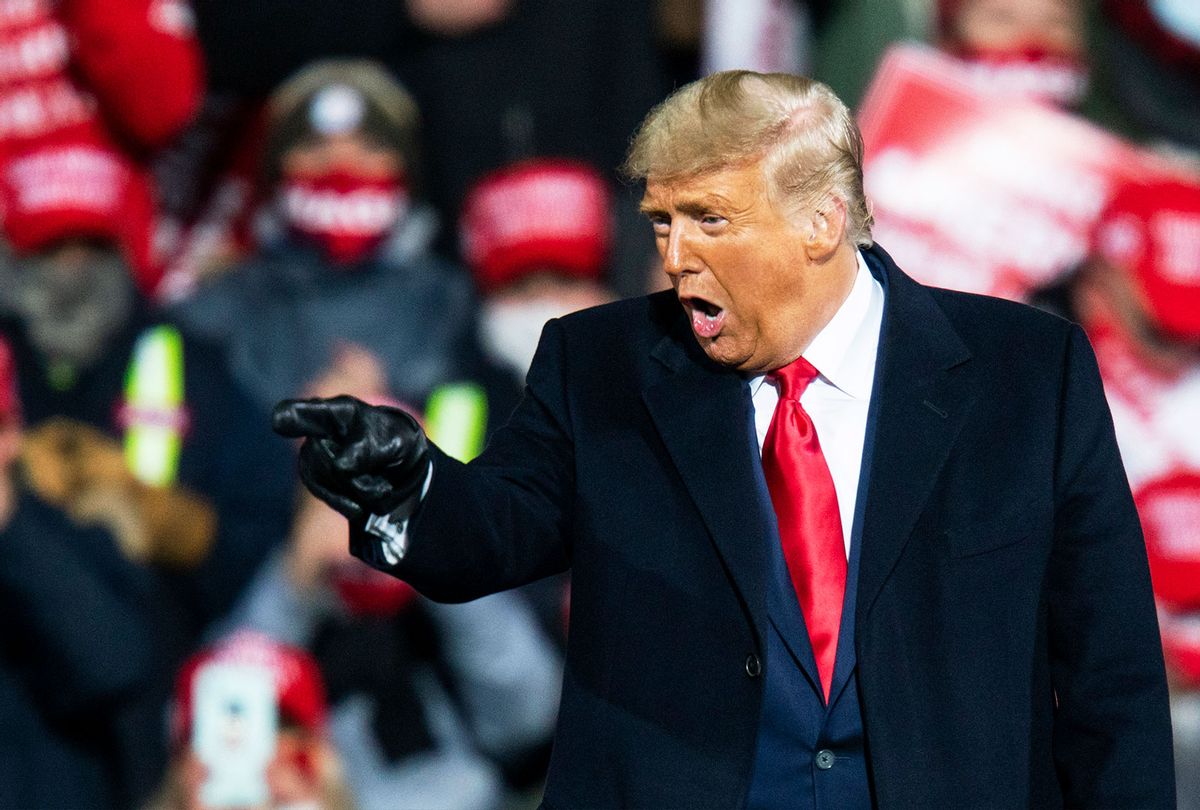 U.S. President Donald Trump speaks to supporters during a rally on October 31, 2020 in Montoursville, Pennsylvania. Donald Trump is crossing the crucial state of Pennsylvania in the last few days of campaigning before Americans go to the polls on November 3rd to vote. Trump is currently trailing his opponent Joe Biden in most national polls. (Eduardo Munoz Alvarez/Getty Images)
--

After a group of Donald Trump's supporters menaced a Joe Biden campaign bus on a Texas highway, it was completely predictable that Trump would openly encourage such behavior. He has never hidden his contempt for democracy and, in recent weeks, been open about his belief that the election process is an illegitimate challenge to his right to rule without accountability. Nor has he been shy about endorsing violence against political opponents, or even ordering such violence, as when he sent federal law enforcement to tear-gas peaceful protesters he was worried might ruin a photo op.

Things got even uglier over the weekend, when a group of Trump supporters in Texas — where openly brandishing weapons has become normalized, at least among the right — surrounded a Biden/Harris campaign bus heading toward Austin on Interstate 35, slowing the bus down and appearing to try to run it off the road. Campaign staff inside the bus called 911, and law enforcement showed up to escort them to safety, although the campaign events were canceled as a precaution.

Trump, of course, was delighted, tweeting "I LOVE TEXAS!" along with a video on the incident. In case there was any doubt where he stood, he later tweeted that "these patriots did nothing wrong".

This isn't surprising, but we should not allow the lack of surprise dull the outrage of this. This is the same man who celebrated the St. Louis couple who threatened peaceful protesters with guns and who told the neofascist group Proud Boys to "stand by" during a presidential debate. Trump's view is simple enough: He's the only person in the world who matters, and there's no limit to what can and should be done to help him get what he wants. Of course he's all for political violence — as long as he, personally, doesn't have to get his hands dirty.

People are worried, with good reason, that this situation will get worse and that we'll see more violence, or threats of violence, this week and possibly thereafter, especially if Trump is losing and he turns to armed right-wing goons in an effort to prevent both voting and vote-counting. Salon's Chauncey DeVega published an interview with counterinsurgency expert David Kilcullen on Monday, in which Kilcullen warned that there are right wing groups that are "motivated and mobilized and willing to engage in violence."

It's important to understand, however, that while these right-wing militants may be dangerous, their numbers are very small and they present very little risk to progressives who wish to vote, go to campaign events, or attend protests.

Trump is amplifying the threat of violence in order to scare people out of taking action to stop him. But there's no need to be afraid. Trump and his supporters make a lot of noise, but very few of them are willing to risk prison, serious injury or death to defend their beloved reality-TV fascist.

As Kilcullen says, right wing militias tend to be "very small," often with no more than "five or 10 members." They can definitely commit sporadic acts of violence, as when 17-year-old Kyle Rittenhouse shot three people — killing two of them — at a Black Lives Matter rally in Kenosha, Wisconsin. On the whole, however, they don't have the numbers needed to present a real threat to the huge throngs of progressives who have hit the streets demanding social justice in recent months.

The truth of the matter is that Trump voters tend to be older and more financially comfortable than Democrats, and most of them just aren't reckless enough to get serious about violence. Like their beloved president, who hides behind a phalanx of security to make impotent threats on Twitter from the White House bathroom, most Trump voters like to play at being tough-guy warriors, but have no real interest in actually making good on those threats.

The centrality of the motor vehicle to these Trump-supporter tantrums really illustrates this point. Even when they decide they want to get out there and act macho, most of these Trump goons still hide in their expensive pickups, afraid of direct physical confrontation with the progressives they are trying to menace.

The Austin incident is a good example. As frightening as that undoubtedly was for the people in the Biden/Harris bus, it's noteworthy that the Trumpers stayed in their vehicles, too craven to get out and look their victims in the eye. It was the same story with Trump supporters in Fort Worth, who harassed a crowd of Biden supporters from the safety of their cars over the weekend. Or in Portland, Oregon, where the major right wing efforts to intimidate Black Lives Matter protesters have been truck caravans, which allow Trump voters to play at being scary while protected behind glass and steel.

Even the violence that broke out at Black Lives Matters protests over the weekend reflected this right-wing cowardice. Most of the attacks on protesters were from people in cars trying to run demonstrators over. That's reckless and dangerous, of course, but it's also a stark contrast with the crowds of progressives marching boldly in the streets.

There's no reason to be afraid of people who are too gutless to even get out of their cars.

There are real concerns that right wing groups will react poorly to a Biden victory — or, for that matter, will engage in celebratory violence if Trump wins — but the likeliest scenario is such violence will be sporadic. We saw what is likely the worst of it at the Black Lives Matter protests over the summer. There were some troubling outbreaks of violence from right-wing counter-protesters, but very few demonstrators were harmed by these idiots. (Violence at the hands of police, sadly, has been quite a different story.)

The infamous incident in St. Louis, with Mark and Patricia McCloskey waving their guns at passing protesters, illustrates the realities here. Yes, the couple was armed, but the entire episode was more pathetic and comical than genuinely scary. When you watch videos of the encounter, it becomes clear what whiny little babies the McCloskeys are, obviously terrified by protesters who posed no threat to them — and who talked back to them without fear.

Folks on the left need to be able to balance two ideas in their head. First, it's deplorable that Trump is encouraging this violence and heartbreaking that there appears to be almost no pushback, and widespread complicity, among other Republicans. Second, the actual threat posed by right-wing militants remains incredibly low.

Instead of letting Trump intimidate them, progressives should get angry — and even more determined. The threats to our bodies are largely empty, but the threats to democracy are very real. Don't let a bunch of empty macho posturing scare you away from doing what must be done to save this country.