Here's where protests are planned, and how states are preparing for election day aftermath 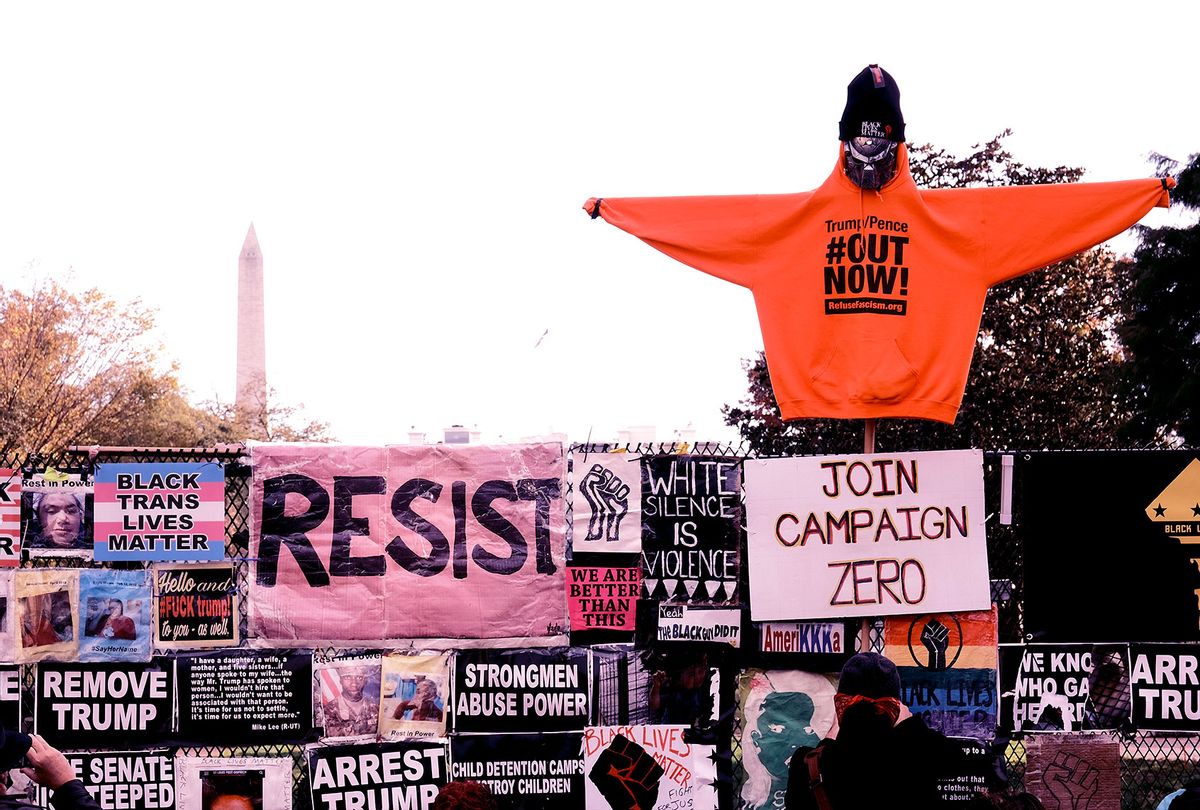 People gather at the Black Lives Matter Plaza to protest for and against U.S. President Donald Trump's re-election on November 3, 2020 in Washington, DC. After a record-breaking early voting turnout, Americans head to the polls on the last day to cast their vote for incumbent U.S. President Donald Trump or Democratic nominee Joe Biden in the 2020 presidential election. (Eze Amos/Getty Images)
--

As polls close on an acrimonious presidential election marred by fears of voter suppression and disenfranchisement, Americans across the country are preparing to take to the streets in protest to ensure that votes are counted.

"We can't anticipate exactly how Trump and his enablers will try to attack democracy (although we have been gaming out a number of different scenarios), but we know that the stakes are too high to sit on the sidelines and wait," the organizers of Shutdown DC, a coalition of activists groups, wrote on their website. "That's why we're making plans to be in the streets before the polls even close, ready to adapt and respond to whatever comes our way."

On Monday evening, the Park Service started to temporarily restrict access to parks around the White House due to "the unique security requirements with the upcoming Presidential election, and the need to quickly de-escalate potentially violent encounters, protect park resources, and maintain public safety," according to the Washington Post. A non-scalable fence, the same one that federal officials erected after the killing of Geroge Floyd in May, was installed at the White House on Monday, as reported by Salon's Igor Derysh.

The Shutdown DC event is one of several actions planned in DC on Tuesday. Youth-led political group Generation Ratify held a gathering in the afternoon, and People's Watch Party is hosting a watch party in Black Lives Matter Plaza, separate from the Shutdown DC event.

Across the country, from Oakland to Dallas to New York City, organizers with Protect the Results — a joint project of Indivisible and Stand Up America — plan to take to the streets and protest if one of the following scenarios occur,: "If Trump declares victory before all the votes are counted, makes unfounded claims that the election was 'stolen,' tries to stop votes from being counted, or otherwise threatens the integrity of the election or the peaceful transition of power," the organization's toolkit explains. In San Francisco, Protect the Results organizers plan on protesting in front of the Twitter building on Wednesday to put pressure on the tech company to fight disinformation. (Many pundits and politicos predict that Trump will declare victory and/or claim there was widespread voter fraud without evidence, as he did in 2016.)

By Tuesday afternoon, early voter turnout exceeded 101 million votes, according to the U.S. Elections Project. In 2016, nearly 138 million Americans voted in the entire general presidential election. The number of voters in this election is expected to far surpass the number of people who voted in 2020.

Meanwhile, over the past week, President Donald Trump has doubled-down on false assertions that the results of the election must be known on election night, in addition to pushing false claims that questioned the integrity of mail-in ballots and absentee voting.

"I think it's a terrible thing when people or states are allowed to tabulate ballots for a long period of time after the election is over," Trump told reporters over the weekend in North Carolina. "I think it's terrible when we can't know the results of an election the night of the election in a modern-day age of computers." Yet it was only in the past few decades that knowing the results of a presidential election on the same day as the election became normalized by the 24-hour cable news cycle.

The rise in mail-in and absentee ballots a result of the coronavirus pandemic, a turn of events that is expected to slow down the counting process especially in states where election workers process each ballot by hand. Thus, it is likely that Americans will go to bed without a clear victor —and why protesters are gearing up for the beginning of what could be a long couple of weeks, or even months.

Various states are asking their national guards to be on standby to respond to anticipatory unrest. In Massachusetts, Republican Governor Charlie Baker asked 1,000 members of the Massachusetts National Guard to be ready in order to ensure Massachusetts "is positioned to maintain public safety following Tuesday's election," WBUR reports. In Oregon, Democratic Governor Kate Brown ordered a statement of emergency for the city of Portland on Monday through Wednesday, in addition to preparing National Guard troops for potential deployment.

According to the Washington Post, the National Guard Bureau put together a "600-soldier quick-response unit of mostly military police, split up between Alabama and Arizona."

The preparations taken at the federal level extend beyond the National Guard. According to an NBC News report, Department of Homeland Security Immigration and Customs Enforcement (ICE) agents have been told to stand by and protect federal property in Washington, which would be a first in an election. A report released by the Armed Conflict Location and Event Data Project and MilitiaWatch in October warned that five states — Pennsylvania, Georgia, Michigan, Wisconsin and Oregon — were at risk to experience increased militia activity before and after the elections.

Counterinsurgency expert David Kilcullen told Salon's Chauncey Devega that the "extreme worst-case scenario" is a disputed outcome where both Biden and Trump both claim victories.

"There is a breakdown in the Electoral College, mass rioting in the streets and somewhere it suddenly becomes even more violent where 25 people are killed in one incident, or an IED is exploded, or it is not cars ramming a crowd but a mass shooting instead," Kilcullen told Devega. "At that point it is the beginning of a second civil war here in America."