In a "Fox News Democracy," authoritarian moves to delegitimize the election aren't condemned so much as mainlined 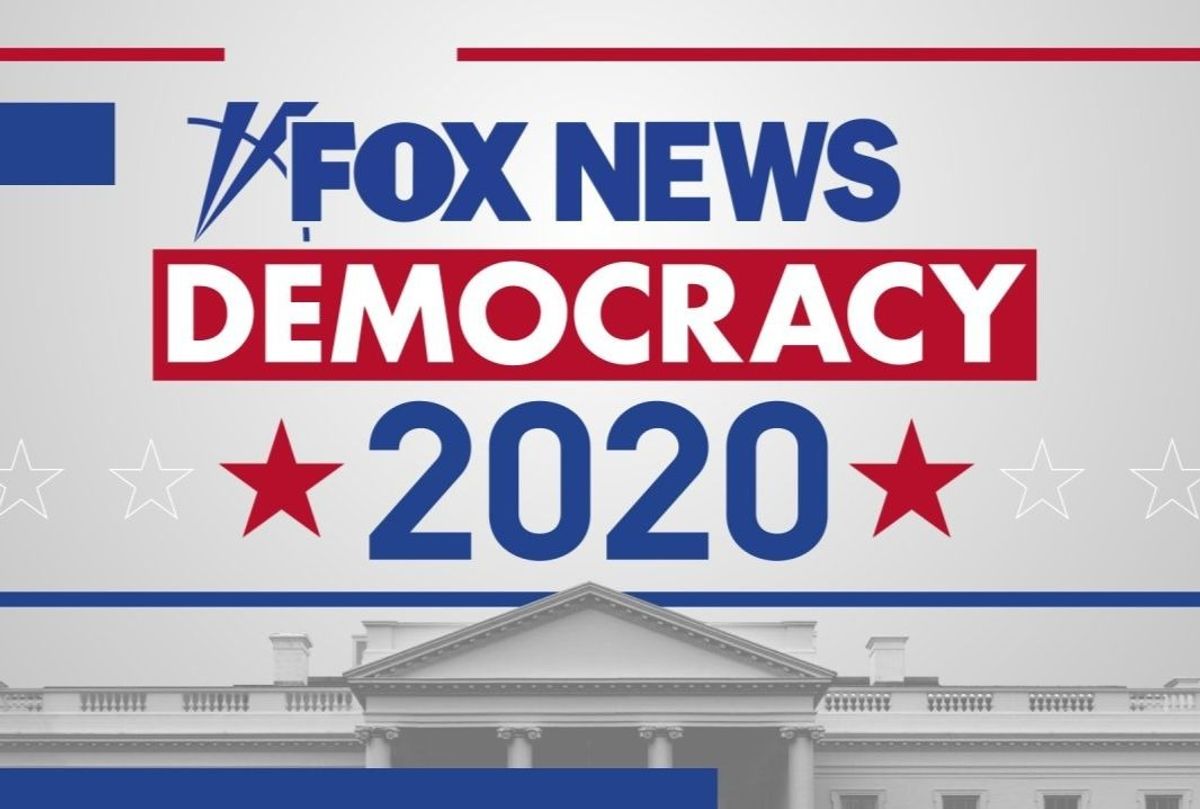 "The story of this night has not really been told yet," he said, advising his colleagues to tread lightly before making definitive calls and political declarations about battleground states. Understand that this sobriety on a night of voting returns for a presidential election is relatively uncharacteristic for Fox, and to its credit the decision desk was relatively conservative in calling states for either candidate, waiting after a number of outlets before placing Florida into Donald Trump's column.

Not to worry, because the network got back on track around 2:35 am ET, right after Trump did what he's been hinting he'd do for weeks now: from the East Room of the White House, he declared victory in states that hadn't been called at that point, including Georgia and North Carolina, and suggested that somebody had prematurely called Arizona for his opponent, former Vice President Joe Biden.

Conveniently enough, that somebody he was referring was . . . Fox News, the first news channel to declare Arizona for Biden despite angry pressure from Republicans insisting the call was wrong. Its decision desk editors, including chief editor Arnon Miskin, joined Wallace and his colleagues Bret Baier, Brit Hume, Martha MacCallum, Juan Williams and Dana Perino to explain several times that, indeed, their call was sound and they stood by it.

Ultimately that headline was bumped by Trump's dictatorial claim that the emerging results via mail-in ballots were "a fraud on the American public," adding: "We are going to the U.S. Supreme court. And we want the voting to stop."

At last, Wallace and Fox News had its story. . . . and in typical fashion, treated it as normal political gamesmanship as opposed to a frontal attack on American democracy. The channel's election night coverage was titled "Fox News Democracy 2020" – not "election," not "vote," democracy. Or more accurately, "democracy" – mark the quotes. One is a governing system, the other is hokey branding designed to create the illusion of fairness and greatness.

Until the man occupying 1600 Pennsylvania Avenue decides that's no longer convenient then, according to Hume and the rest – it's yet another twist in this game called politics. And it's tough to discern which is more frightening – the fact that Trump did exactly everything he signaled he'd do, or the fact that Fox treated his authoritarian move as if it were just another Tuesday in America, or that watching it all unfold felt more exhausting than agitating.

This is what happens when a person watches Fox News all day on one of the most fraught election days in our lifetime – even more so than in 2016. Back then, as Baier recalled, around 3 a.m. the network made the call for Trump, and at that point Hume and the rest were positively giddy. Hours before that Baier had read a shocked and dispirited statement from the French ambassador about "a world is collapsing before our eyes" and laughed.

Contrast this with now, when Wallace was moved to describe Trump's dictatorial power move as "an extremely flammable situation the president has thrown a match into." Williams could only claim bafflement, referring to Trump's statement as confusing. In his defense, he also mistakenly referred to the blue wave or the blue shifts as a "purple haze." Confusion is a theme with Williams, who met Trump's early morning false claim of victory with the observation that this is "wild stuff."

Haze, shift, wave, stuff – however you slice it, by that point the Fox neophyte was amply marinated in its version of Upside-Down. There had to be a lot of occasional Fox viewers tuning in Tuesday night. You could tell because network strategically limited the face time of its most incendiary prime time hosts, and when they did appear they toned down the rhetoric. That only goes so far for the likes of Laura Ingraham and Tucker Carlson and Sean Hannity, who can't help but behave in any way other than completely obsequious when it comes to all things Trump.

Anyway, they didn't need to be present with Hume on deck weighing in on cue about Biden's purported memory problems and using coded language about potential unrest, predicting that if there is unrest and looting, it would be from "people who have caused trouble in urban areas" and not the Proud Boys.

In the afternoon Trump Communication Director Erin Perrine set up what happened later when she came on and replied to Biden and his campaign's insistence that Trump cannot declare victory on election night with, "I'm really sorry for the American people that they have to listen to Joe Biden lie to them like that."

Later contributor and legal analyst Jonathan Turley, speaking with Fox's Harris Faulkner, explained that the 77% of people fearful of election day violence, has less to do with a lack of faith in the system than a lack of faith in each other. There's a lot to unpack there but to be honest, the close vote despite everything Trump has done and failed to do –  mishandling the pandemic, enacting racist policies, emboldening white supremacists, being impeached and much, much more! – says Turley's not wrong.

And Fox would likely say that is the fault of "professional panic peddlers" CNN and MSNBC, and liberals in general. "The liberal mindset is designed to crave power," explained Jesse Watters on "The Five," and he was echoed by Greg Gutfield, who characterized Trump voters as fun-loving and happy, as opposed to Biden voters, who are entirely obsessed with politics because they have nothing else. Well sure, not right now.

Hume spent most of the evening looking bored at others, so eventually he took it upon himself to keep the viewership posted on the shifting betting odds in Vegas – because polls are dead! At 8:30 p.m. he was champing at the bit to call Texas and Georgia, even at one point throwing up his hands in frustration at the decision desk's refusal to put those wins in the Trump column.

After Twitter labeled Trump's tweet accusing Democrats of "trying to STEAL the Election" and alleging that votes were being cast after the polls were closed (there's no evidence of that) as "disputed and possibly misleading," Hume rolled his eyes and said the platform was overreacting. To Hume, if the incumbent in danger of losing by a close margin decided to declare victory and insist the vote count stop, that's simply Trump engaging in political grandstanding and tossing red meat to his base, and not actively collapsing democratic norms. (CNN, it must be said, summed it up with a chyron that read "Trump Says He'll Go To Supreme Court; Unclear Why" which is accurate and darkly funny at a time when we shouldn't be laughing.)

So of course the Fox Election Night team's reaction to Trump's false and dangerous declaration of victory was irritation but qualification. Baier told audiences that Fox hasn't called Georgia or Michigan or any of the states Trump claimed to have won while reacting with an even tenor that indicates they expected this move.

"We are in full-scale voting litigation," Wallace said with a tinge of vigor in his voice. White House correspondent John Roberts responded with, "Katy, bar the door: here we go!"

We were always going to be at some version of this hell place. Many suspected the polls were unreasonably optimistic, and as far as responsible journalists and news outlets could be, they counseled consumers that this was not going to end on Nov. 3 because of the overwhelming number of mail-in ballots and the scaled-back resources available to count them owing to the pandemic.

But it was unnerving watch a network adopt a wait-and-see attitude at the results, and then calmly fasten its seatbelts as months' worth of Trump's efforts to delegitimize the election via misinformation, voter suppression and intimidation and amplified by the network's usual prime time hosts finally took the stage.

All of this was always possible, but none of it would have gotten this far had Trump's corrupt strategies not been amplified without question by Fox pundits and without much of any pushback from its news team. It isn't just them. Here's the headline tweet that went out from the Associated Press, a trusted mainstream news source: "WASHINGTON (AP) -- Trump touts wins in key states, says he will fight election in Supreme Court." No mentions that this statement is false, or that it is an assault on the voting process. Nothing like that. Just . . . more of Trump being Trump.

And this is what the story has been for the last five years, to say nothing of Election Night and the days ahead. Perino summarized events by predicting that the election will not only go to the courts, but will be tried in the court of public opinion, "and Trump is better at dominating that." Not without a lot of helpful airtime on her network, but no worries there.

Fox will make it happen.