Joe Biden on the brink of victory — after Michigan, Trump has almost no way to win

For all his bluster, Trump is out of options: He must win every remaining state to hold the White House 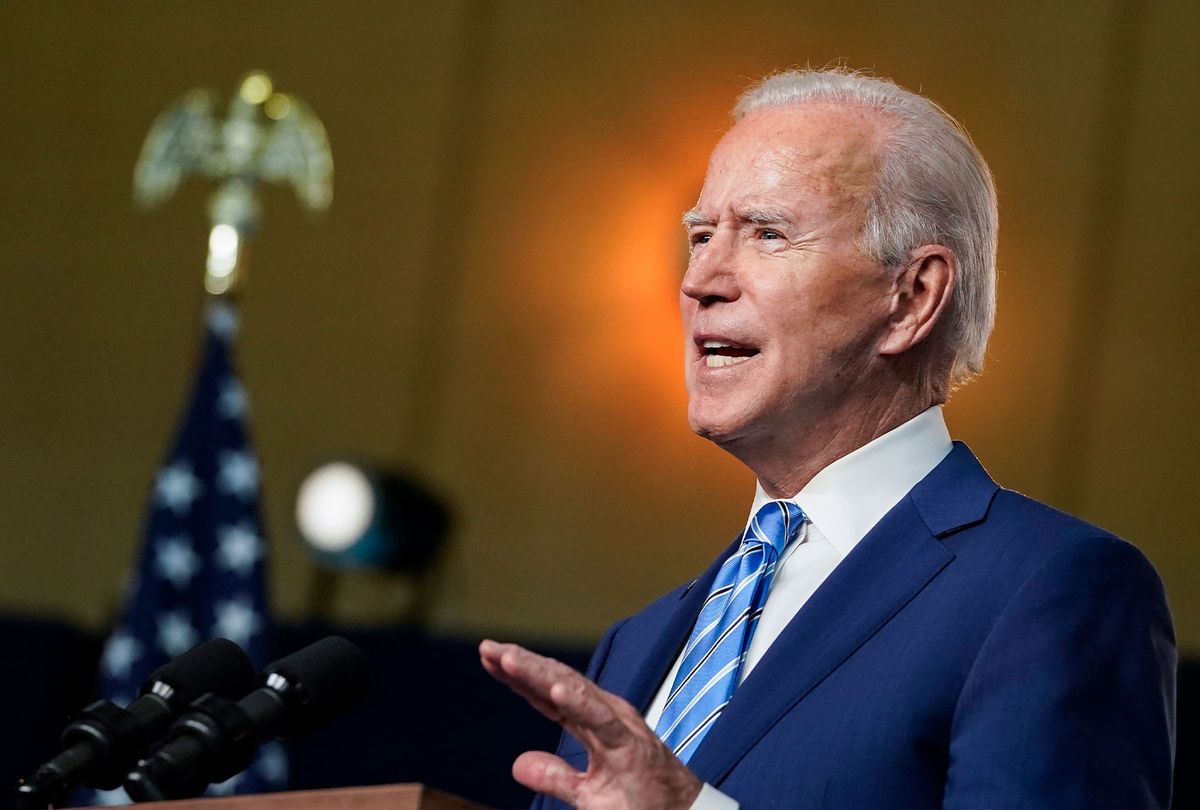 Democratic presidential nominee Joe Biden speaks the day after Americans voted in the presidential election Day on November 04, 2020 in Wilmington, Delaware. Biden spoke as votes are still being counted in his tight race against incumbent U.S. President Donald Trump which remains too close to call. (Drew Angerer/Getty Images)
--

With electoral results in for all but a few battleground states, President Trump's possible path to victory is now extremely narrow, according to projections from the Associated Press (AP).

As of Wednesday afternoon, former Vice President Joe Biden has 264 electoral votes following wins in the critical states of Wisconsin and Michigan, and needs only six electoral votes to reach the magic number of 270. Trump, who baselessly and falsely said he had won the election early on Wednesday morning, would need to win 56.

Of the remaining states, only Alaska, which has not voted for a Democrat since 1964 and where Trump holds a commanding lead, appears out of reach for Biden. If Trump wins Alaska, it would bring his total to 217, but would not affect Biden's map.

Delegate-rich Pennsylvania would be a major prize for either candidate, and may not be called until later this week as counting of absentee ballots continues. Biden does not absolutely need its 20 votes to win. Trump, however, does.

With Michigan in his column, Biden can now secure the presidency with a victory in any remaining state, including Nevada, which has six electoral votes and where Biden holds a narrow lead with an estimated 83% of the vote counted.

To win re-election, Trump has to carry every state that hasn't been called — not just Nevada and Pennsylvania, but the Southern battleground states of Georgia and North Carolina, where vote-counting continues and the final results are likely to be extremely close.

These narrow prospects have prompted the Trump campaign to do what many people feared — apply pressure in an effort to shut down the counting process.

Trump campaign manager Bill Stepien tried to claim victory in Pennsylvania on Wednesday, in a virtually unprecedented maneuver seemingly intended to placate his boss. A campaign has no authority to declare victory on its own, and more than a million votes remain to be counted in Pennsylvania, according to The New York Times. That declaration came after the campaign filed two lawsuits. One suit would temporarily stop vote counting in the state until Republican observers are given increased visibility over the process. The campaign is also seeking to intervene in a Supreme Court case that would block a decision to count mail-in ballots that are received by Friday but were postmarked by Election Day.

On Wednesday evening, Pennsylvania Gov. Tom Wolf and Secretary of State Kathy Boockvar held a press conference to discuss the vote count, and said they would fight to ensure that every legal vote is counted. They also said that the late-arriving mail-in ballots potentially involved in the Supreme Court case amounted to a relatively small number, unlikely to change the overall results.

The Supreme Court declined to expedite the Republican case ahead of the election, but may still take it up.

Trump's margin in Pennsylvania has been steadily shrinking as the vote count has continued. As of Wednesday evening, he led by less than 200,000 votes, after leading by nearly 500,000 earlier in the day. About 86% of the estimated vote has now been counted, and New York Times election analyst Nate Cohn has said he believes Biden may ultimately take the lead by the time the count is complete.

Trump's campaign has also filed a lawsuit to halt the voting in Michigan until Republican poll observers are given increased access. Since all major news outlets have called the state for Biden, that suit seems academic. The Trump campaign has also asked for a recount in Wisconsin, where Biden's margin of victory was slightly more than 20,000 votes, around 0.6%. Trump's campaign would have to pay for a recount, which would begin in about two weeks. A 2016 Wisconsin recount paid for by Green Party candidate Jill Stein made no difference in the result, increasing Trump's margin by about 130 votes.

The race in Georgia is too close to call, according to the AP. By Thursday morning, more than 51,000 ballots remained to be counted — most of that mail-in votes from two counties where Biden has done extremely well: Fulton County in Atlanta, and Chatham County, home to Savannah. With Trump holding a steadily-shrinking lead that now stands at less than 20,000 votes, the final margin is expected to be razor-thin. On Wednesday evening the Trump campaign filed yet another lawsuit to stop the counting of the votes, the AP reports.

In North Carolina, all ballots that arrive by Nov. 12 will be counted, as long as they were postmarked by Election Day, which makes any estimate little more than guesswork. While Trump currently holds a 77,000-vote lead over Biden, according to the Times, that race is also not over: Election officials in the Tar Heel State report nearly 290,000 ballots outstanding, a large slice of them from the Triad metroplex, which, given historical trends, appear likely to favor Biden.

In Nevada, where Biden leads by fewer than 8,000 votes, about 194,000 votes have not been accounted for, the AP says. However, a large majority of those, about 150,000, are from Clark County, which is home to Las Vegas and votes heavily Democratic. Many Nevada ballots that were submitted or postmarked by Election Day have yet to be tallied, the AP reports.

If Biden wins Nevada — a result which could be announced Thursday morning, when the state's two largest counties are scheduled to report results — he would hit 270 electoral votes precisely. No matter how much the Trump campaign might protest, major news organizations would declare Biden the winner of the 2020 presidential election at that point. Stay tuned.