Lost in the fog of four years in Trump’s America

I've used TV to anesthetize myself to the outside world. But that ends now 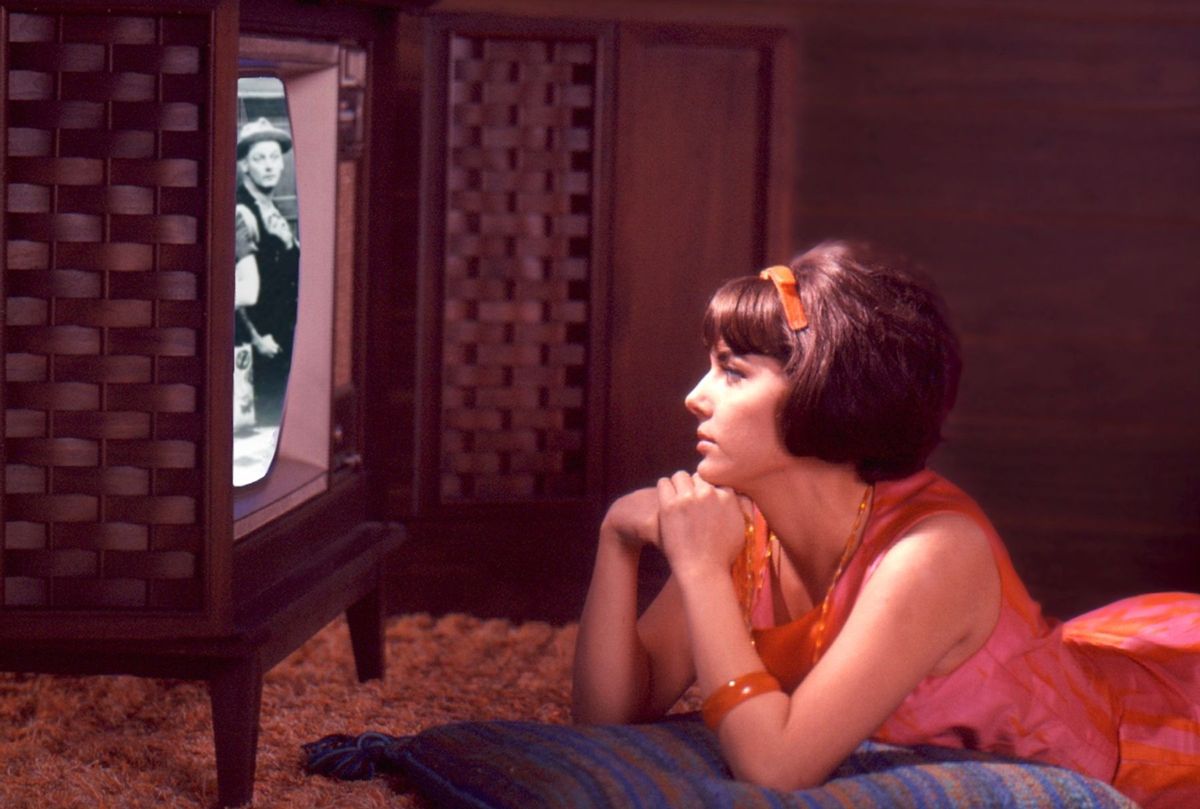 A composite image shows a young woman in a pink and orange dress lies on the floor and watches an episode of 'The Honeymooners' on a console television set, late 1960s or early 1970s. On the screen is an image of American actor Art Carney (1918 - 2003) (Tom Kelley/Getty Images)
--

My Netflix history lies to me. But I suspect it's for my own good.

Before I started writing this piece, I wanted to see if I could size up how bad the situation was. When I checked, I saw only partial truths. Yes, I'd watched the entire run of "Great British Bake Off" over the last few weeks, it assured me. That's fine! Plenty of people binge shows! It's a pandemic! You're stressed!

But I knew better. See, not only had I watched the entirety of "Great British Bake Off" seasons available to stream, I had done so multiple times. On repeat. For weeks on end. According to Netflix, though, it was just the once. Much like how Spotify doesn't call in a wellness check when you listen to the same sad song for two and half months straight, Netflix scrubs your viewing history to only show an episode of a series once. I'm sure their internal records still record the truth and that the uncaring monolith judges me accordingly, but it never lets it show. It knows, perhaps, what's up.

What's up, is the same thing that's been up for the last four years: low-key disassociation. Though raised in a small town (Pop. 1,992) in the upper Midwest, I quickly came to realize my own deeply progressive leanings shortly after turning 18. One of those loud-mouthed feminists I was raised to revile, I felt at home when my wife and I eventually relocated to Los Angeles, safe in the deep blue heart of the country.

This is all to say that the 2016 election broke me. Hillary Clinton was my deeply-flawed hero and I truly believed that when it came right down to it, the country would identify and select the "lesser of two evils." I was wrong. And suddenly, America was not a country that I recognized anymore.

Except, America hadn't changed. America was the same as it ever was. I was just seeing it for the first time, as reality was finally beginning to erode the rose-colored glasses of privilege. Or so I thought.

Sorry. We were talking about "Great British Bake Off."

During the last four years, but more specifically, over the last 10 months, I've been using TV to anesthetize myself to the outside world. I suspect I'm not alone. Revisiting old favorites, discovering new stories, hunkering down and looking for any distraction that can drown out the sound of the apocalypse knocking at our door.

There were pauses, of course, when the world itself demanded action that surpassed the fear of everyday life, when we took to the streets in outrage over the murder of George Floyd and banded together to grieve the death of Ruth Bader Ginsburg, not to mention the ongoing sorrow over nearly a quarter million Americans killed by a pandemic still running rampant throughout the country.

But as soon as enough time had passed, it was always back to the fog.

And, listen, the fog was great. In the fog, all your favorite TV shows wait for you, your favorite characters urging you to forget your worries and return to a place where everyone knows your name. It was like being trapped in purgatory, but with every confidence that it was a clerical error you just had to wait out. I turned to the fog because I believed, misguidedly, that there would be a normalcy to return to if I was patient enough. In the meantime, I dedicated myself fully to "GBBO," and "Parks and Recreation" before that, "The Office," "30 Rock," "Designing Women," and on and on.

Read more from IndieWire: Being disabled under Trump has caused me to question myself

It probably goes without saying that the fog was not actually a great place to live. I first noticed it when I would venture into older shows, like the aforementioned "Designing Women." Trump's name gets dropped as a punchline to a joke surprisingly often on the sitcom from the late 1980s and each time, it felt like an incursion in to my safe space. How dare this 35-year-old TV show disrupt my stupor with a joke about a buffoonish real estate magnate, not knowing the twisted resonance it would hold decades later.

The self-deceiving nature of this state was further revealed last weekend, when some internal barometer sent the entire system offline and nothing I used to distract myself was effective anymore. All of the fears and negative stimuli I had been trying to keep at bay for months and years came crashing in and things were really ugly for awhile.

To say that I'm in pain over the election results would be putting it lightly, but so much of that hurt is self-inflicted. While in my TV-soaked stupor throughout the administration, I fell back into pre-2016 bad habits, like assuming that progress is self-evident and that people would vote in their own best interest. I forgot that even though the world is on fire, not everyone cares about putting it out, and that sometimes groups would rather win than admit they've made a mistake.

I was hoping for a Biden landslide because I wanted to believe that we'd all learned an important lesson and were back on the same page. It's easy to believe in America when your team wins decisively. It's harder to be a patriot when the hard work is ongoing. I failed our country over the last four years because I assumed we were all sorry for the mess that had been made of it. I genuinely forgot that for many people — for the 5 million more people who voted for Trump this year over 2016 — they love the mess and the pain and the hurt and the hate.

Once the election results have been finalized and the court challenges cease, I hope not to return to "GBBO" or any series as a form of anesthetic — TV as general frivolity, as well as the basis for my career is fine, however — because at some point self-medication does more harm than good.

Spending so much time on the couch, watching U.K. bakers watch and worry over their cakes and breads and ridiculous pastry towers, sometimes my foot will fall asleep and need to be brought back online. Sometimes I'll be impatient and attempt to walk on it all the same and marvel at how dangerous it is, the lack of tension or resistance in my joints carrying with it an implicit threat, telling me that I've gotten myself into a state where my body can't protect me from myself. Generally it's enough to spook me into sitting down and waiting it out.

Read more from IndieWire: "We Are Who We Are" review: HBO finale turns a Hollywood ending into a subversive triumph

Over time, the paresthesia fades and my nerve endings register their displeasure, an electric frisson of pain and relief at again being alive and alert and part of a whole.

Pain happens for a reason. It reminds us we're alive and warns us that that might not always be the case. After 2016, I tried to flee what was happening in my mind and my heart and my country, without ever leaving the safety of my own protective bubble. I told myself that running away from the truth was a temporary state of being, but four years later, it's clear that wasn't true.

The disappointment of the 2020 election, in which Biden seems likely to win — but in such a lackluster way that it almost feels like a loss — feels clarifying in a way that 2016 was not. What seemed like a fluke then is now an unavoidable reality. Does it hurt? Hell yes, it does. Do I want to run away? You better believe it.

But the fog is gone. It's done. We can't look away from the country as it truly is and the only way we're going to change it is by fighting for it and, in some cases, against it. Let's put away our remotes and our streaming queues, close our laptops and put on our masks, get organized, stay safe, and work for something better. Something clearer. We owe it — I owe it — to those people who never stopped fighting, never had the luxury of sinking into the fog, and always saw plainly the country as it is: a work very much in progress.