John C. Reilly, Fred Armisen, and Tim Heidecker should be a comedy dream team but they never achieve lift off 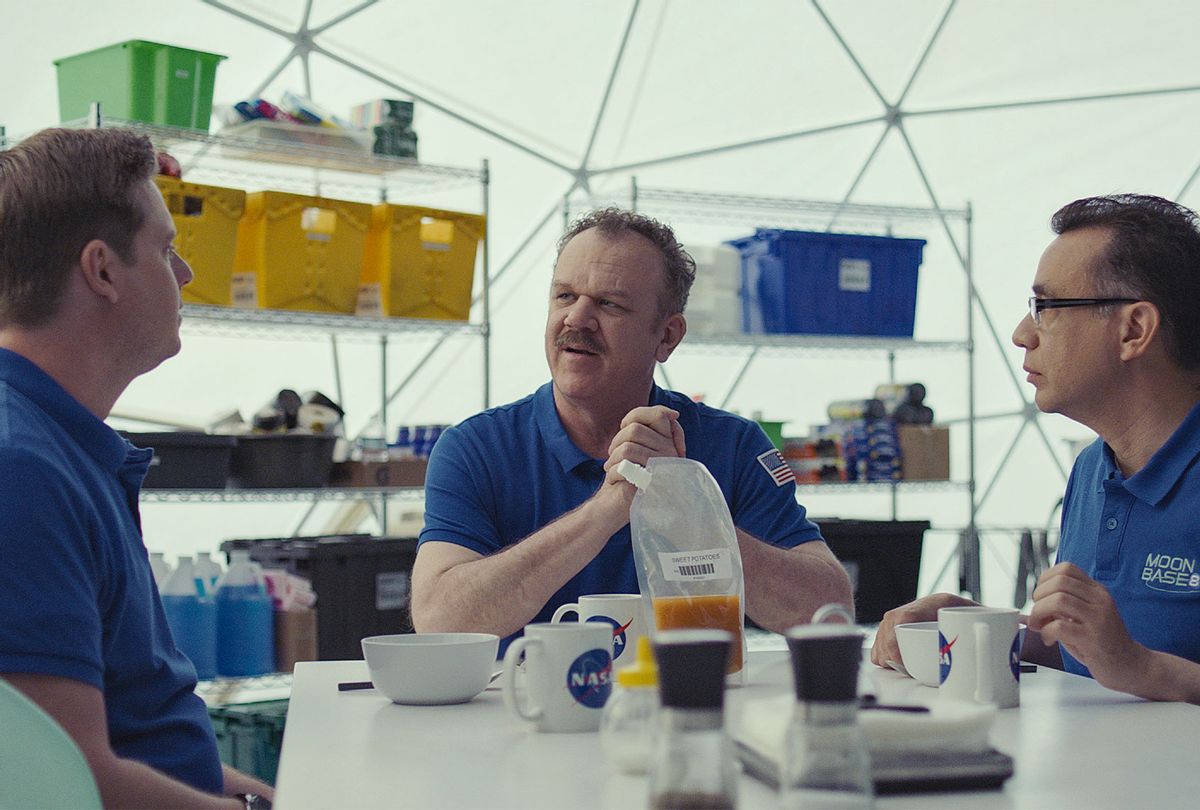 Tim Heidecker as Rook, John C. Reilly as Cap and Fred Armisen as Skip in MOONBASE 8 "Rats". (Courtesy of A24/SHOWTIME)
--

When the GOP sustained criticism over lacking any kind of meaningful policy platform to sell voters on a second term for Donald Trump, its official Twitter account responded in late October by promising the moon.

Actually, a moon base.

This tops a hilarious list of three wild promises nobody asked for and one that we actually need.

Pres. Trump is fighting for YOU! Here are some of his priorities for a 2nd term:

What's in the second tweet in this thread? Yes, it was a thread. Those promises are as follows.

*Make All Critical Medicines and Supplies for Healthcare Workers in The U.S.

You may recall that we're in the midst of a pandemic right now. Maybe that's first tweet-worthy? Whatever – let's head back to the moon business to state the obvious: it's not something taxpayers asked for. We have no pressing use for it. And given the current state of affairs, it's a dumb project. Very dumb.

This brings us to the Showtime series "Moonbase 8," an alleged comedy about a trio of astronauts sequestered in a Moon Base Simulator located deep in the desert of Winslow, Arizona. Led by Cap (John C. Reilly) the team includes Skip (Fred Armisen) and Rook (Tim Heidecker) as they follow a series of mission exercises sent down from NASA in a quest to qualify for an upcoming lunar mission.

Although most of them are purposeful, the threesome's extended isolation makes them wonder if what their doing isn't somehow pointless, a feeling that isn't out of bounds after being kept away from family and out of contact from other human beings for upwards of 200 days. Making matters worse is that none of them are uniquely skilled or even demonstratively more than above average in intellect.

This should create the perfect conditions for brilliant comedy, and the fact that the series is co-written by its stars and "Baskets" creator Jonathan Krisel, who also directs its episodes, should result in some bit of inspired absurdity. Alas, this is a series that takes its desert setting too seriously and runs on humor so far beyond dry as to be desiccated.

What's strange and particularly disappointing about its failure is these are actors who have excelled at weirdness in separate projects onto which they stamped their identity. Heidecker's classic "Tim and Eric Awesome Show, Great Job!" helped set the surrealist bar for Adult Swim's live action series; Reilly's established himself as a highly watchable goofball in movies like "Walk Hard: The Dewey Cox Story," and Armisen is consistently adorable and weird everywhere he appears since "Portlandia" went off the air.

Their three sensibilities should mesh into something magical here but instead "Moonbase 8" just . . . sits there. You know a comedy isn't working when it's too airless to even be thought of as indulgent. And that's saying something considering that the first episode features a pro-sports celebrity who ends up being the funniest thing about the series – and he's gone after the first half hour.

That means "Moonbase 8" joins a list of space-themed misfires that includes Netflix's mission to Mars series "Away" and "Space Force," HBO's "Avenue 5" (whose opening episodes were enjoyable, but ended up floating aimlessly after a point), the Disney + revival of "The Right Stuff" and Apple TV+ "For All Mankind." If any of these lit the collective audience's rockets, we might understand why producers might be compelled to keep trying. But with this kind of yield it may be better to scrap these efforts and retrain our focus on down-to-earth matters like, say, giving us something legitimately funny at a time when we are so very desperate for a laugh that isn't accidental.