Stop the vote? Count every vote? For Trump, that depends on whether he's winning or losing the state

The president's desperation was easy fodder for critics in politics, the press and entertainment 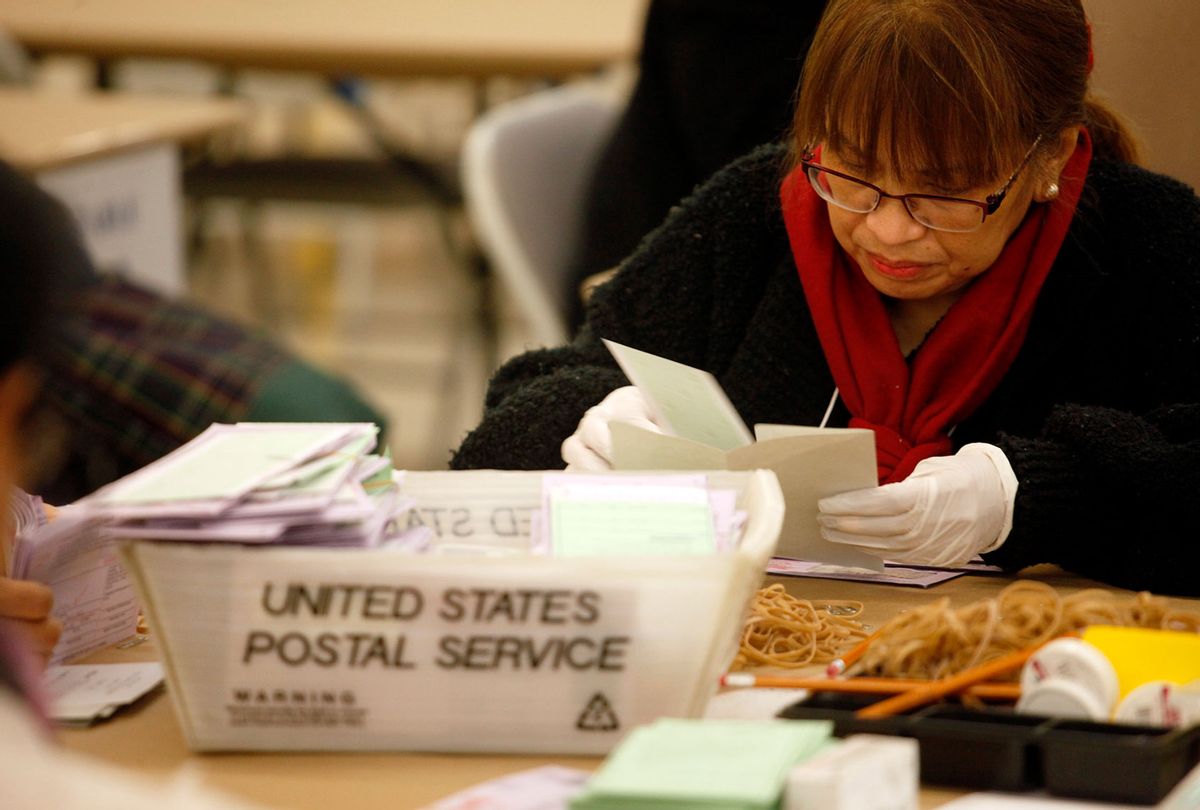 A ballot inspector prepares ballots to be counted from the Los Angeles primary election in the tally area at Piper Technical Center March 4, 2015 in Los Angeles, California. (Getty Images)
--

Offering irresistibly low-hanging fruit for political rivals, pundits, and late-night comedians — who all devoured it with gusto — President Donald Trump was lambasted Wednesday and Thursday for simultaneously suing to stop the vote counting process in key battleground states where he clings to a precarious lead in the 2020 presidential contest, while urging election officials in states where he narrowly trails Democrat Joe Biden to keep counting.

The Trump campaign filed lawsuits in Georgia, Michigan, and Pennsylvania, calling for an end to vote tallying in the latter two states until it could obtain what it called "meaningful access" to ballots it wishes to review. The suits came as the president and some of his backers accused Pennsylvania election officials of "fraud" — without providing any evidence to support their allegations. State Attorney General Josh Shapiro fired back that the president's lawsuit was "more a political document than a legal document."

In a bid to cast aspersions and doubt upon the vote-counting process in the days after Election Day, Trump tweeted numerous lies that were quickly slapped with warning labels or hidden by the site's administrators. One glaring example:

Critics in the worlds of politics, media, and entertainment were quick to skewer Trump's latest hypocrisy.

"In 2016, when Trump won PA, MI, and WI by a handful of votes, the election system worked just great," tweeted Sen. Bernie Sanders, I-Vt. "Now that he's losing, it's a 'fraud' and they're 'stealing the election.'"

"This is how demagogues destroy faith in democracy and move us toward authoritarianism," the former 2020 Democratic presidential candidate added. "Count every vote!"

Rep. Ilhan Omar noted that it is "very curious how Trump is demanding the counting stop in Pennsylvania, but staying quiet about the counting in Arizona and Nevada even Alaska," asking rhetorically, "I wonder what that's about?"

Other observers also weighed in on the president's lies and hypocrisy:

It wasn't long before numerous video mash-ups showed protesting Trump supporters alternately chanting "count the votes" and "stop the vote" — depending upon whether the president was ahead or behind in their state.

Others pointed out that a very similar scenario once played out on the popular HBO political satire "Veep," right down to confused voters like the Phoenix-area Trump supporters who chanted "stop the count" even though the president trailed Biden in Arizona.

Late-night television hosts naturally had a good go at Trump too.

"I thought if your election lasted more than 48 hours you're supposed to seek medical attention," quipped Jimmy Kimmel, host of the eponymous "Jimmy Kimmel Live!" on ABC on Wednesday night. Kimmel, who joked that the race was "closer than Donald and Ivanka at a father-daughter dance," also took on the topic of Trump's hypocrisy.

Beyond all the tweets and jokes was a president who appeared increasingly desperate as his path to victory narrowed to near the point of being unwalkable. As Biden was leading or closing in on Trump in Arizona, Georgia, Nevada, and Pennsylvania and holding a 253 to 214 Electoral College lead — with 270 electoral votes needed for victory — the president delivered a lie-laden Thursday evening White House address that Omar called "pathetic" and "simply painful to watch." The speech was widely derided by not only Democrats but also Republicans including Sen. Mitt Romney, R-Utah, and Maryland Governor Larry Hogan.