America's relationship with the world: Now with less terror and incoherence

Biden's global policies won't please everybody. But "coherent conversation with a normal guy" is possible again 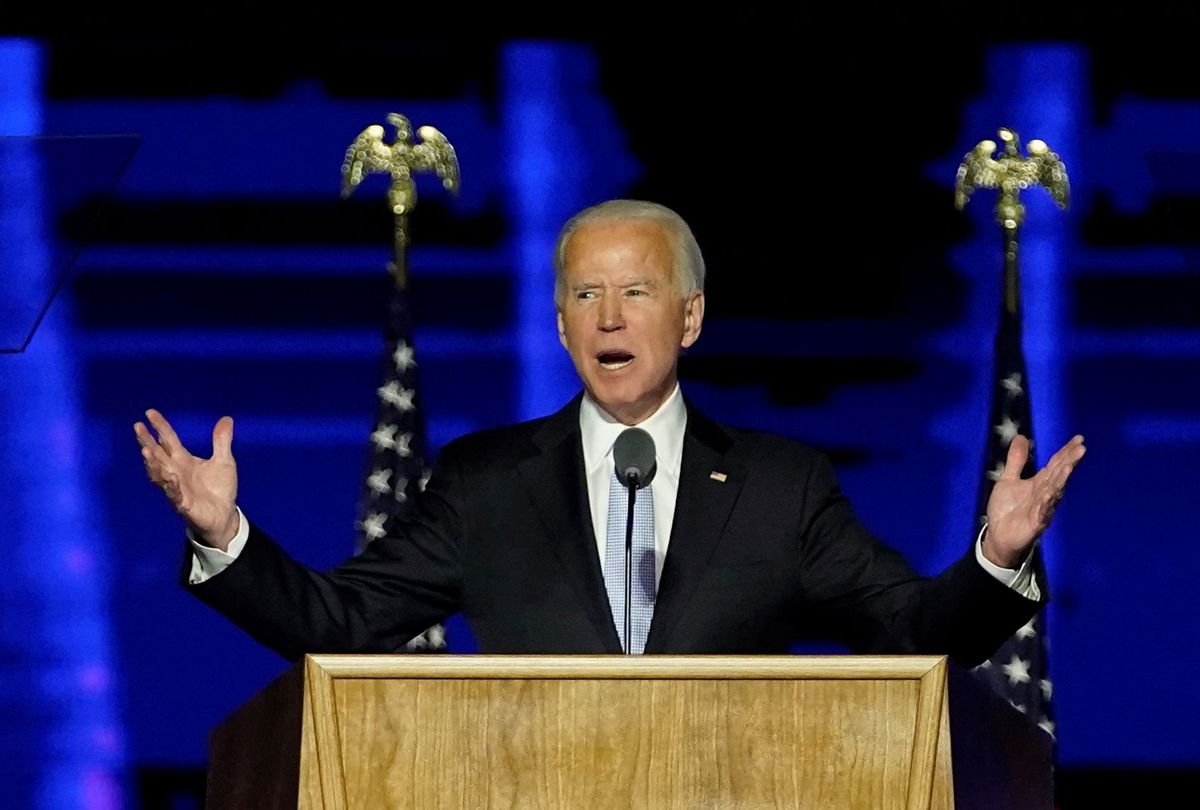 President-elect Joe Biden addresses the nation from the Chase Center November 07, 2020 in Wilmington, Delaware. After four days of counting the high volume of mail-in ballots in key battleground states due to the coronavirus pandemic, the race was called for Biden after a contentious election battle against incumbent Republican President Donald Trump. (Andrew Harnik-Pool/Getty Images)
--

The electoral math is inexorable now and Joe Biden and Kamala Harris have won the election. They won a large popular vote victory, with substantially more total votes in the swing states Trump won in 2016. As election expert Larry Sabato put it on Twitter, "this was NOT an especially close election ... You want close? Look at 1960, 1968, 1976, 2000 among others."

Naturally, Trump is still refusing to concede. After all, he told his followers that the only way he could lose was if the result was rigged, so he has left himself no room to concede gracefully even if he wanted to. He does not want to.

So we see Trump and his team flailing about ineffectually with thin legal threats that would require corrupt, partisan judges to overturn thousands of votes in multiple states to award him a victory. Anything's possible, but as much as they might like to do that, even Trump's handpicked judges will have a hard time coming up with a rationale that would bring that result.

Former President George W. Bush, Sen. Mitt Romney of Utah and a few other establishment Republicans have acknowledged the election results, but there's radio silence from most GOP officials. It appears they are still in collaborationist mode, hoping that Trump still has some magic dust up his sleeve and remaining fearful of their constituents, who are deep in denial. And then there are those who are out there openly supporting Trump's tantrum:

This is really about trying to find a way for Trump to "win," even as he's clearly lost. I believe he will find his way out of this by calling the election stolen, pretending to leave under duress and afterward fashioning himself as the "president in exile" who was deposed in a "coup." He might even boycott the inauguration. I think he'll do this with an explicit or implicit promise that he's running again in 2024, even if he doesn't end up doing it.

This has the positive effect for Democrats of keeping the Republican Party in turmoil for some time to come as Trump works feverishly to organize his following into a profit center and wreak revenge on his enemies one way or the other. (Remember, his credo is "always get even.") For Republicans, there is a different calculation. Trump confidant Roger Stone, who gets the dark side of conservatism better than anyone, spoke the truth when he said the lack of a clear concession means that Biden will have "a cloud over his presidency with half the people in the country believing that he was illegitimately elected."

That would be Trump's idea of sweet revenge, for sure. After all, at least one of his reasons for fighting the Russia investigation was because it cast doubt on the legitimacy of his own election. You can bet that Lindsey Graham and Ted Cruz, who are among the GOP jackals urging Trump not to concede, will be happy to take full advantage of that "cloud" as well.

Meanwhile, here in the real world, the election has been decided and all eyes are turning to Georgia, where two runoff elections will determine control of the U.S. Senate. Mitch McConnell's willingness to obstruct anything that might actually help the people in this moment of crisis has already been well demonstrated, even under Donald Trump. It will be much, much worse with a Democratic administration.

I'm sure the Biden staff is already looking at ways to reverse the Trump administration's destruction of the administrative state, and with a new attorney general we may see some positive action at the Department of Justice as well. But let's not kid ourselves: Much of the Democratic domestic agenda depends on Georgia. If McConnell is in charge of the Senate and guys like Graham and Cruz are running major committees, it's going to be a legislative standoff. And America really doesn't need that right now.

Having said that, there is one big plus already, regardless of what Trump, McConnell or Graham have up their sleeves: The U.S. foreign policy agenda will soon be in the hands of the Biden administration. Their team has already released a statement of Biden's intention to immediately reverse Trump's worst executive orders, most notably the withdrawals from both the Paris climate accords and the World Health Organization.

The reaction from around the world to news of Trump's defeat was pretty clearly one of immense relief. The rogue superpower has pulled back from the brink.

Trump may have refused to concede, but from across the globe leaders have issued congratulations to President-elect Biden, which says something. The New York Times reported on Saturday that Prime Minister Justin Trudeau of Canada, German Chancellor Angela Merkel and British Prime Minister Boris Johnson immediately issued hearty congratulations as soon as the race was called. Former French ambassador Gérard Araud probably spoke for all of them when he told the Times, "You will be able to have a coherent conversation with a normal guy."

Israeli Prime Minister Benjamin Netanyahu waited a bit longer, but he finally realized that Trump wasn't going to pull off a miracle and issued a polite statement. The Trump-loving strongmen have not been as pragmatic. Crown Prince Mohammed bin Salman of Saudi Arabia, Turkish President Recep Tayyip Erdogan and Hungarian Prime Minister Viktor Orbán are reportedly not pleased. No word has come in from Rodrigo Duterte of the Philippines, Brazil's Jair Bolsonaro, China's Xi Jinping or Trump's most treasured BFF, Kim Jong-un of North Korea. And let's not forget Vladimir Putin in the Kremlin, who has maintained radio silence. It's a sad day for authoritarians everywhere. Trump was so very easy to manipulate.

The U.S. managed to avoid a national security disaster during Trump's tenure (so far), but that has been sheer luck. Giving him any credit for not getting us into a war means you haven't been paying attention to how close we came and how much forbearance it took from the rest of the world to avoid it. One very scary example was when Trump made the impulsive and dangerous decision to kill Iranian Gen. Qassem Soleimani, just so he could bag one more "bad guy" than Obama. Iranian leaders showed surprising restraint and we got lucky. Who knows what four more years would have brought?

Trump's main foreign policy was to undo anything Obama did, as he even admitted just the other day. Everything else was either something he picked up from watching CNN back in 1985 or a desire to impress an authoritarian strongman.

I'm sure many of us will find ourselves opposed to some of Biden's policies, in some cases fairly soon. But they will not be totally incoherent, and world peace won't be contingent on whether the president woke up on the wrong side of the bed that morning. As Joe Biden would say, that alone is "a big f**king deal."