It's Biden's job to act like a grownup. But "unity" and "civility" are a long way off

It's natural for Biden to set the tone. But "civility" toward racists and conspiracy theorists is not an option 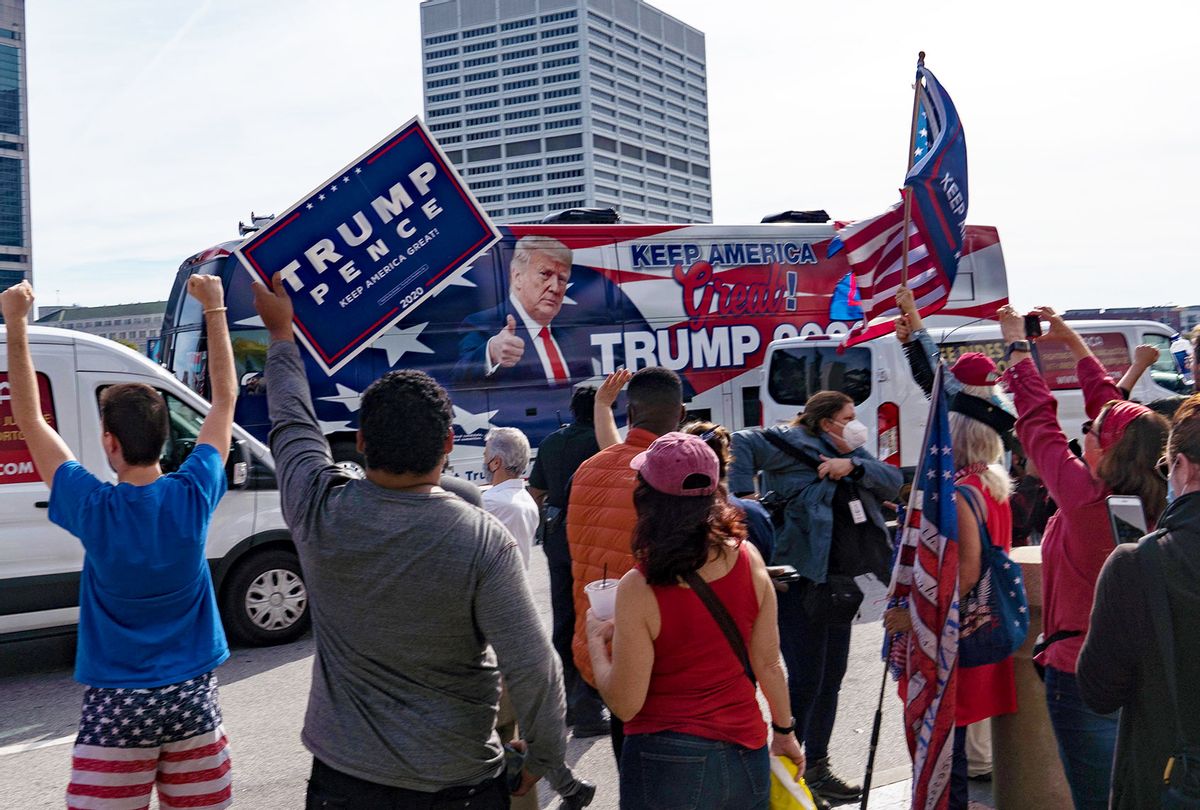 A Trump Bus drives by supporters of President Donald Trump protest outside State Farm Arena as ballots continue to be counted inside on November 5, 2020 in Atlanta, Georgia. Attention is focused on a few key battleground states as the U.S. presidential election remains too close to call. (Megan Varner/Getty Images)
--

If there's one thing President-elect Joe Biden understands it's that chief executives lead by example. Presidents set the tone for the nation. In that regard, there's nothing wrong with the next president "going high" in the face of a soon-to-be ex-president whose entire business model is going low — underground septic-tank low. In fact, Biden's sentiments about healing a deeply divided nation are commendable, even if he only ends up reducing the fever by one or two degrees. Irrespective of the outcome, Biden will have to balance noble outreach, reconciliation and, yes, political hardball. We all have our roles to play in the discourse, and this is his.

One of the myriad differences between Biden and Donald Trump is that Biden knows that the president's role is vastly different than a cable news pundit's role, or a podcaster's role, or an activist's role. Hillary Clinton believed this as well, which is why she conceded on the morning after election night in 2016. She not only conceded but then disappeared from public view for at least a year, despite an unprecedented Russian cyber-war and calls to "lock her up," whereas Donald Trump continues to throw a conniption fit like a bloated Veruca Salt.

Yes, rank-and-file Democrats were enraged and horrified by the outcome of the 2016 election, but the top brass of the Democratic Party, including Barack Obama and especially the losing presidential ticket, accepted the result with dignity and acquiesced to a normal transfer of power. That's one of the many characteristics that distinguish the grownups of the Democratic Party from the whining hyenas of the Republican Party. Democratic leaders tend to behave in a manner that reflects adulthood and traditional leadership qualities, while Republicans at every level act like toddlers with machine guns.

So, yes, Trump and his GOP henchmen, including Senate Majority Leader Mitch McConnell, believe it's perfectly acceptable for leaders to behave with the same kind of knee-jerk shrieking as social media comment trolls. Trumpism craves all the power and none of the monumental responsibility commensurate with such rarefied posts. Biden, thank goodness, possesses the capacity to balance his newly earned power with humility, honor and competence. Accordingly, while our political trench warfare will surely continue after the inauguration, millions of Americans will be grateful to wake up each morning without that queasy, off-balance sensation of leaning too far back in our chairs and almost falling over — the instability of a wholly unstable president with the nuclear codes in his pocket.

Nevertheless, Republican leaders will continue to disrupt the transfer of power to salve Trump's brittle ego, while simultaneously pandering to the wounded rage of Trump's loyalists. There will be no concession speech. There will be no peaceful handoff to the Biden team. There will be no reciprocal attempt at decency or civility. Expecting Trump or his loyalists to do any of those things is just as foolish as expecting Trump to pivot suddenly to being "presidential." It'll never happen, because it's physically impossible for him to accept defeat graciously. It's not in his DNA.

And, by proxy, it's not in the DNA of his followers. I mean, how do we reason with people who believe there's a deep state of blood-drinkers running the government? How do we find common ground with people who support the indefinite incarceration of children? How do we reach out to voters who, for the second time in a row, voted for a known sociopath? How do we engage in dialogue with people who seriously believe that "herd immunity" is an acceptable means of fighting a pandemic — one that has already killed more than a quarter-million Americans? These are badly deluded people who will only be redeemed when they've been burned by their own paranoia, hatred and myopia. As with confronting an addict, nothing you say or do will change their minds. And when they come at me, I don't intend to suffer through their ludicrous tall tales about Hunter Biden or nonexistent voter fraud without responding accordingly.

For the next four-plus years, the Republicans will behave with just as much venom and provocative nincompoopery as Donald Trump has for the previous four. In response, we won't be carrying flower arrangements onto the proverbial battlefield — not with democracy on the line and a current president who's willing to abuse his power to remain in office illegally. We won't ignore their obstructionist shenanigans and counterfactual nonsense. We won't ignore the racism, the contempt for the rule of law, the destruction of norms, the elevation of tyranny over democracy, or the pandering to ignorance. We won't ignore Trump's crimes or the damage he has inflicted on our system or our once-esteemed reputation. Any expectation to the contrary is badly mistaken.

Sure, bilateral civility would be a monumental achievement, if it were at all possible these days. Unilateral civility, on the other hand, is an outstanding recipe for being constantly pantsed by the other side, and the Biden White House would do well to keep its eyes open. We all will. Trumpism isn't going anywhere, and neither will the Trump copycats. There will continue to be a trend toward acting like Trump — among 71 million or so Americans — whether at department store checkout lines or in Congress or in discussion threads on Twitter. This is America now. Either the Democrats continue to win elections, or this corrupted faction of idiocrats and easily-led conspiracy cultists occupying the Republican Party will bring it all down on our heads. If they had achieved another four years of Trump, they might have. Now that particular doom is at least stalled for a while, although there's always a chance Trump will run again.

There's something immensely satisfying about watching an irredeemable bully lose, and lose spectacularly. Now, with his impotent fury and cringe-worthy tweets, he's protracting his defeat rather than dulling the humiliation with a dignified concession. Once again, Trump's supporters are mistaking his desperate, undignified, unspooled attempts at self-preservation for steadfast leadership and a fighting spirit. They still don't get it. After four years of this madness, they continue to make the same colossal error in judgment — the blindness of a cult — and it has metastasized into their bones.

For more than 244 years, we've always had political shovel fights, and we always will. But the commander in chief shouldn't be one of the shovel fighters. You won't hear Joe Biden screaming nonstop about radical Republican districts. You won't see Biden withholding federal aid from states that voted for Trump. You won't see videos of Biden ordering shock troops to clear out Republican protesters for a photo-op. You won't see Joe Biden accusing anyone of being "enemies of the people," except for our actual enemies. You won't see Biden tweeting before sunrise about how unfair everyone is to him. He won't purge the rightfully apolitical bureaucracy of those he believes disloyal. And he won't hold hands with dictators. By these standards and more, the national tone will absolutely improve thanks to our new president — but the divisiveness isn't going anywhere.