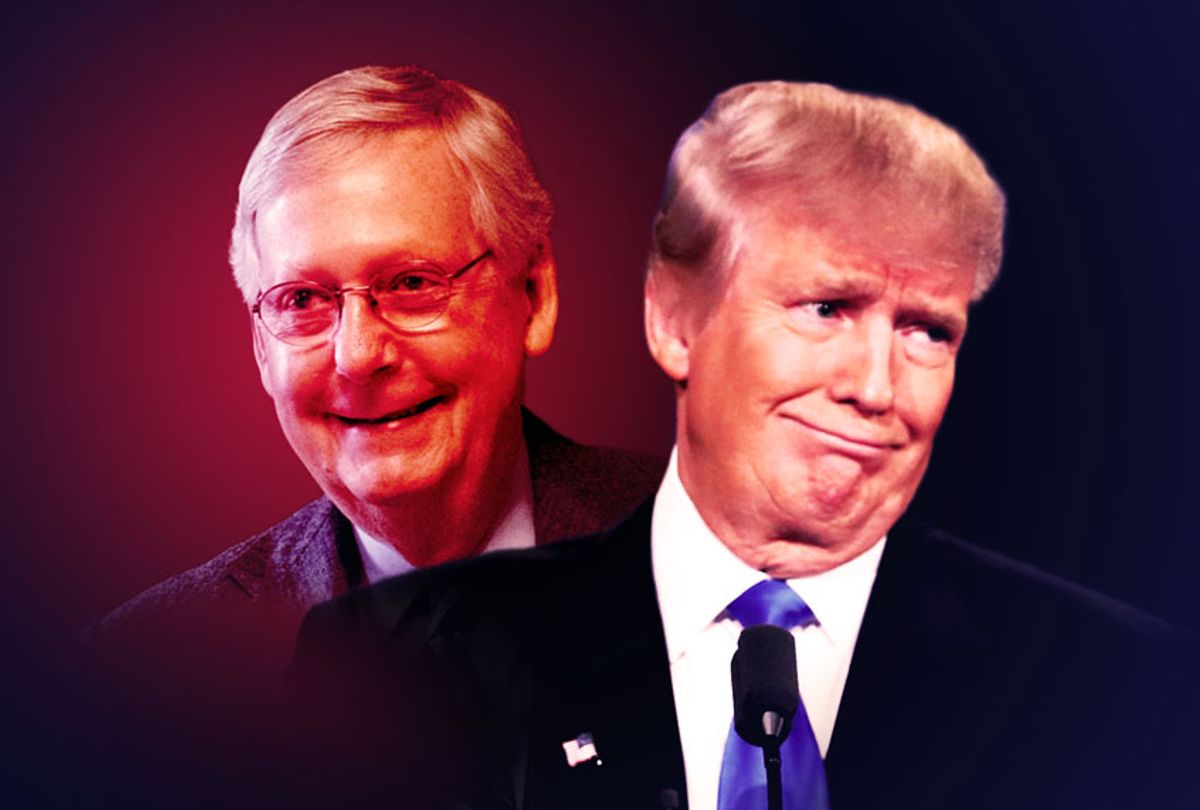 Donald Trump's attempted coup started as a clown show. Over the weekend as Joe Biden was declared the winner by the mainstream media, and then by the entire world, it morphed into an outright grift. In a hilariously weird press conference outside a Philadelphia landscaping company on Saturday, Rudy Giuliani and other Trump flunkies — including a registered sex offender — pushed the idea that they could somehow invalidate Biden's robust electoral victory. On Twitter, Trump continued to hype the utterly false notion that there's some pathway to invalidating opened and counted ballots in various states he has clearly lost, and somehow reverse the results of this election in the courts.

Trump was backed up, as usual, by his corrupt administration. White House press secretary Kayleigh McEnany, lied so boldly about the possibility of invalidating votes that even Fox News was forced to cut away and offer a fact check to viewers. Attorney General Bill Barr, in a move to validate Trump's evidence-free claims of voter fraud, told federal prosecutors they were free to open investigations into these baseless allegations. And the usual opportunistic sleazeballs in the Senate — including Sen. Ted Cruz of Texas and Sen. Lindsey Graham of South Carolina — are all over right-wing media, trying to hype Trump's election lies.

Trump's attempted coup, to be clear, has zero chance of working. His election lawsuits are pathetic and keep getting thrown out, including by Republican judges. All the whining about "illegal" voters — which is mostly code for voters whose skin color or political leanings are not to Trump's taste — amounts to nothing, since the votes he's complaining about are already opened and counted. At this point, the main purpose of all the false promises that the courts will invalidate the election appears to be money — the fine print on the solicitations for Trump's "legal defense fund" makes clear that the money will mostly be used to pay down Trump's campaign debts. Since Election Day, more than 130 such emails begging for cash have gone out to gullible marks — sorry, I mean Republican voters. Considering what a practiced con artist Trump is, he's probably already working out how to leverage his fake victim status to squeeze his hapless supporters for more cash down the road.

The problem, unfortunately, is that Senate Majority Leader Mitch McConnell has decided to back Trump's play, as I predicted he would a year and a half ago.

In a repulsive speech in the Senate Monday, McConnell avoided actively endorsing Trump's false accusations of fraud, but nonetheless put a gloss of legitimacy on the president's fiction by saying that "no states have yet certified their election results" — something that doesn't happen until December in any event — and that Trump is "100% within his rights" to pursue bogus allegations that the election was rigged.

Both claims are meant to sound reasonable, but are in fact deeply dangerous.

For one thing, McConnell implied there could be something shady about the presidential election, but affirmed the legitimacy of down-ballot elections, where Republicans did better than expected. Problem is, these are literally the same ballots. How can the same ballot be legitimate one when it comes to a congressional or Senate race, but a fake in the presidential race?

It's the same Mitch-style logic under which confirming a Supreme Court justice nominated by a Democratic president nine months before the next election is somehow unacceptable, but confirming a justice just days before the next election is perfectly fine, as long as a Republican president nominated that person. Put more bluntly, it's just bad faith.

Secondly, while Trump may technically have the right to file frivolous legal actions, the real question here is whether he has the right to deliberately undermine the clear verdict of the American electorate with a pack of ludicrous lies. McConnell is using this rules-lawyering to avoid the real question, which is why he and other Republicans are refusing to stand up for the integrity of our democracy.

Some folks, like never-Trumper journalist Bill Kristol, have theorized that McConnell and other Republicans are backing Trump's coup efforts not because they think Trump will succeed, but to humor the president's injured ego.

I think that's unlikely. McConnell has barely hidden his contempt for Trump from the beginning, and openly treats the president as a man-child to be exploited and discarded the second he's no longer useful. It's highly doubtful he cares one bit about coddling Trump's hurt fee-fees.

No, the real reason McConnell is doing this is simple: He does not believe in democracy, not really.

That's why he has spent his entire stint as majority leader first refusing to seat Barack Obama's nominees to the federal courts and then, the second Trump was in office, stuffing the bench at lightning speed. McConnell sees the courts as a way for Republicans to stage an end-run around democracy, because judges can strike down democratically passed laws with no accountability to voters.

McConnell's unwillingness to recognize duly elected Democratic leaders as legitimate only appears to have hardened. That's why he's treating Trump's efforts to invalidate this election as an opportunity. It's not that he thinks Trump's clownish power-grab will succeed, although McConnell would certainly be delighted if he did. It's that McConnell sees Trump's false accusations of fraud as a pretext he can use to undercut Biden even before he takes office — and in all likelihood to refuse to acknowledge Biden as a legitimate president once he does.

McConnell's main goal with Biden, as it was with Obama, is to make a Democratic presidency look like a failure. That means not just blocking major legislation, but also judicial nominations and quite possibly Cabinet appointments. Trump's fraud accusations won't even come close to allowing him to remain in office — but they sure do make a lovely excuse for McConnell to ruin Biden's ability to govern.

Not is all lost. McConnell is taking a big gamble here. His increasingly open contempt for democracy could backfire. In Georgia, which Biden has apparently won this year, has not one but two Senate runoff elections in January that will determine who holds the majority. Republicans are clearly worried about losing those races, as evidenced by Gov. Brian Kemp's evident warnings that he will escalate the state's voter suppression. It's certainly conceivable that Georgia voters angered by McConnell's efforts to undercut the president-elect they voted for will punish him at the polls by taking away his Senate majority.

In the meantime, however, McConnell's actions should not be downplayed or misunderstood. He's not in this to coddle Trump's feelings or to spout pointless hot air. He almost certainly doesn't think Trump's coup attempt will succeed, but is eyeballing a "soft coup" of his own, one in which he kneecaps Biden's presidency well before Biden even takes the oath.

As Salon's Andrew O'Hehir wrote on Monday, while Biden's win was a relief, it "cannot resolve the crisis of democracy." McConnell's power play here is exhibit No. 1. Trump may be on his way out, but McConnell's war on democracy is both cleverer and subtler more than anything Trump has ever tried. Because of this, McConnell's soft coup is far more likely to be successful. Our best hope is that enough voters wake up and realize that democracy isn't safe until the entire Republican Party is disempowered, not just the orange reality-TV host currently at its head.