Why voters of color were decisive for Biden despite Democrats’ missteps

Grassroots groups expanded the electorate, despite ineffective outreach from the Democratic Party 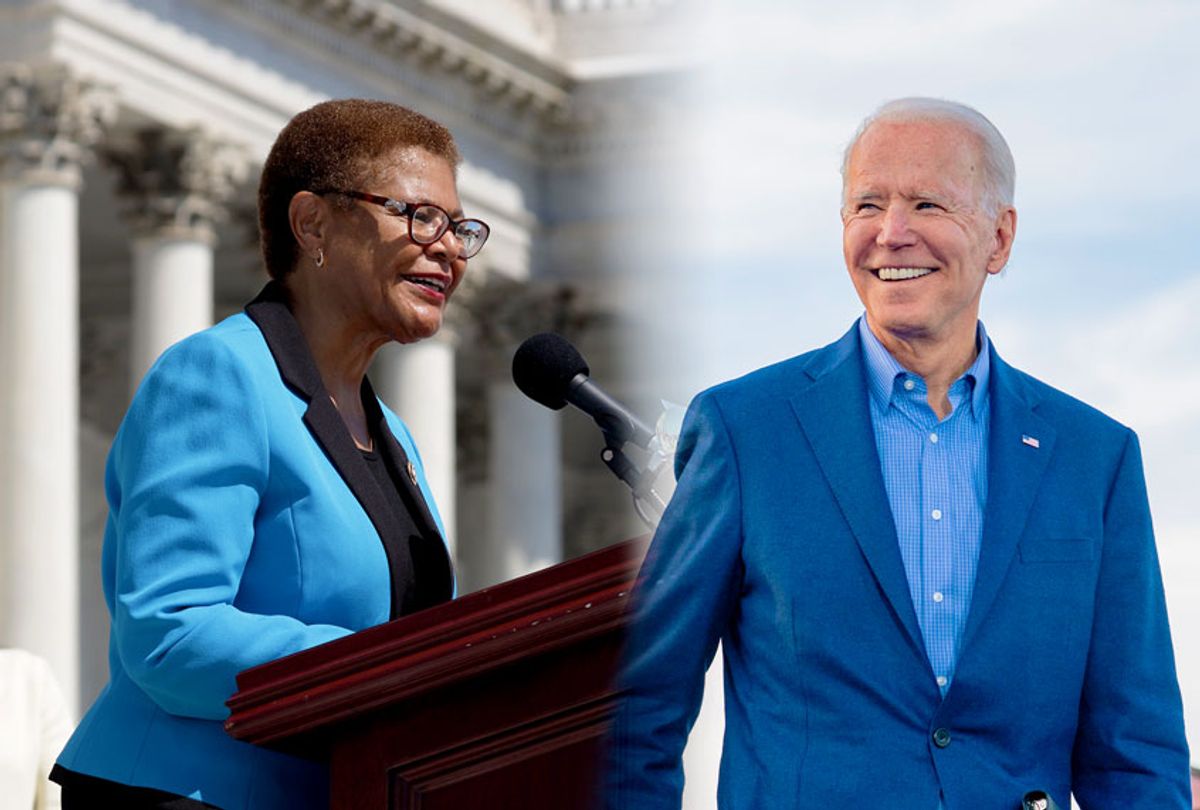 Like many voters, Yuritzi Aguirre, 20, was paying close attention to this year's election. Growing up in Texas as part of a large, working-class, Mexican-American family with mixed immigration status, Aguirre wanted to make her voice heard on behalf of her relatives who can't vote.

But despite her demographic importance in this election, no one from Joe Biden's campaign ever reached out to her. Neither did President Donald Trump's campaign.

"There hasn't been anything that sticks out to me as reaching out to Latinx voters," Aguirre said. "We weren't empowered or motivated to vote."

Her experience is illustrative of a broader pattern. Neither political party can claim they are behind 2020's record-high turnout of voters of color, experts told Capital & Main. Rather, grassroots groups across the United States are responsible for expanding the electorate through localized efforts, despite ineffective outreach from the Democratic Party and active suppression by the Republicans.

"The Democratic Party hasn't put a lot of investment into our communities. It's why we've built independent vehicles to reach our folks," said Tania Unzueta, the political director for Mijente, a national network focused on engaging eligible Latinx voters in battleground states, including North Carolina and Georgia.

The new generation of voters of color activated by these on-the-ground efforts may have tipped the scales in key states this election, and are likely to shape future races, whether or not the parties decide to engage with them.

The Democratic Party's path to victory in this election hinged heavily on the fast-growing demographics of eligible voters of color, said Dorian Warren, the president of Community Change, a national network of grassroots political organizers. (Note: Warren serves on Capital & Main's advisory board.)

In past elections, white voters have been more likely to be registered to vote, and to turn out to vote, than other racial or ethnic groups. But now, their share of the electorate is shrinking. Voters of color have accounted for more than three-quarters of the growth of the U.S. electorate since 2000.

Despite the fact that most Blacks, Latinx, Asians and Native Americans lean progressive, the Democrats' leadership may have decided against making investments to reach out to those groups because the party takes communities of color for granted, Warren said.

Instead, the party followed its longtime playbook, which aims to shift existing white voters rather than engage new voters of color, he added. (The majority of white men and women of all ages voted for Trump, according to multiple polls, the only racial or ethnic group to do so.)

"It's much easier to just hire some fancy white guys to cut an ad. It's much harder to invest in communities of color," Warren said. Registering and engaging voters of color requires time-consuming and expensive on-the-ground work, including knocking on doors and having repeated conversations that are not limited to election cycles.

"The 2020 Democratic primary showed both political parties and all future candidates the playbook to win," Diaz said, pointing to the campaign of Senator Bernie Sanders, which emphasized meeting voters where they are through an issues-based platform built around substantive rather than descriptive representation.

These organizing techniques have proven successful in some recent congressional races. Progressives like Alexandria Ocasio-Cortez, Ilhan Omar, Ayanna Pressley and Rashida Tlaib all handily won re-election, and will be joined in the House of Representatives by two more progressive women of color: Teresa Leger Fernandez, a Latina who won in New Mexico, and Cori Bush, the first Black woman to represent Missouri in Congress. All of these women built relationships with grassroots groups that helped ensure that their support within the communities was reflected at the polls.

Otherwise, big wins anticipated by Democrats didn't materialize, and party members vehemently disagree about where to place the blame, with some admonishing the left and others like Rep. Pramila Jayapal of Washington arguing that progressives "turned out huge numbers of young people, brown and Black people … who will ultimately save the day in the race for the White House."

The Democratic National Committee didn't respond to a request for comment.

The Republican Party, unlike the Democrats, has implemented a coordinated and sophisticated two-pronged strategy of suppressing and misinforming voters of color, said Jennifer Epps-Addison, a political organizer who directs the Center for Popular Democracy, a network of state-based groups focused on building the political power of marginalized communities.

Although voters of color have been "subjected to incredibly aggressive campaigns of voter suppression, disenfranchisement and misinformation" throughout U.S. history, Epps-Addison said, Republicans have abjectly disenfranchised this electorate since the gutting of the Voting Rights Act in 2013. For example, many states and municipalities have enacted stricter voter ID laws, shut down polling places in predominantly Black and Latinx neighborhoods and discarded absentee ballots from voters of color at higher rates than white voters.

Since the GOP lost to Barack Obama in the 2012 presidential election, the party has mainly sought to eke out wins by mobilizing its declining white and often Evangelical base through strategic racism, Warren said.

But in the 2020 elections, the Trump campaign effectively used misinformation tactics to peel off a few percentage points from voters of color, predominantly Black and Latinx men. For example, Trump repeatedly made claims that he had done more for Black communitiesthan any president since Abraham Lincoln, and leaned on endorsements from prominent celebrities like rappers Lil Wayne and Ice Cube. Trump also appealed to key voting blocs of Cuban and Venezuelan Americans in the swing state of Florida through disinformation that painted centrist Biden as a socialist.

Trump's campaign also started running Spanish-language ads earlier than Biden's did, and was outspending the Democrats up until the final months of the election. These ads, tailored to specific Hispanic nationalities and bolstered by disinformation on platforms frequented by Latinx voters, may have tipped the scales in some battleground states. The GOP may have also had a leg up because it continued door-to-door canvassing efforts throughout the election cycle, whereas the Democrats ordered campaigners to stop knocking to reduce the risk of spreading the coronavirus.

With Democrats largely ignoring voters of color, and Republicans mainly suppressing them, organizations on the ground ran the most effective voter engagement, said Aimee Allison, the founder and president of She the People, a national network elevating the political power of women of color.

In recent election cycles, independent political funders like Way to Win have stopped funneling money through Democratic Party committees, which distribute resources based on "a playbook that's not going to work," Allison said. Instead, they're directly funding local and state-based organizations focused on expanding the electorate. Groups funded through these models, such as New Virginia Majority and Black Leaders Organizing for Communities, helped secure wins for Biden in swing states like Virginia and Wisconsin, according to Allison.

The clearest example of how discriminatory policies can mobilize voters of color came in Arizona, which proved a key state for Biden, Diaz said. Just as a racial uprising and anti-immigrant policies led communities of color to start building progressive coalitions in California almost 30 years ago, ultimately turning the state solid blue, Latinx voters in Arizona organized their political power in opposition to the draconian enforcement of immigration laws by then-Maricopa County Sheriff Joe Arpaio.

"The maturation and fruition of invisible, day-to-day organizing" by activists, volunteers and grassroots leaders who serve as the trusted messengers in their communities helped flip Michigan and Pennsylvania blue and kept Biden competitive in states like Georgia and North Carolina, Warren said.

Voting is habit forming, so the winning strategies centered mainly on tapping into bases that hadn't been encouraged to participate in the past, which is sure to transform the electorate for years to come, Warren added.

That rings true for Yuritzi Aguirre, who has voted in every election since she came of age. She was activated by her brother, Sheridan, who works with United We Dream Action PAC, a national immigrant youth-led lobbying and advocacy group focused on building political power around multi-ethnic, intersectional issues like immigration, health, racial justice and LGBTQIA rights.

Although Aguirre was initially worried that something bad could happen at the polls, everything went smoothly for her voting on the University of Texas at Austin campus. She plans to stay engaged in local and national politics.

"This is only the first step and I'm hoping that this can lead to more people then feeling empowered to know that they deserve better," she said. "We just need to give the mic to those people who are actually interacting with our communities to take office and to be the voices that we need in the future to come."