Will Biden stick with failed policies of militarism — or launch a new era of diplomacy? It's a crucial decision 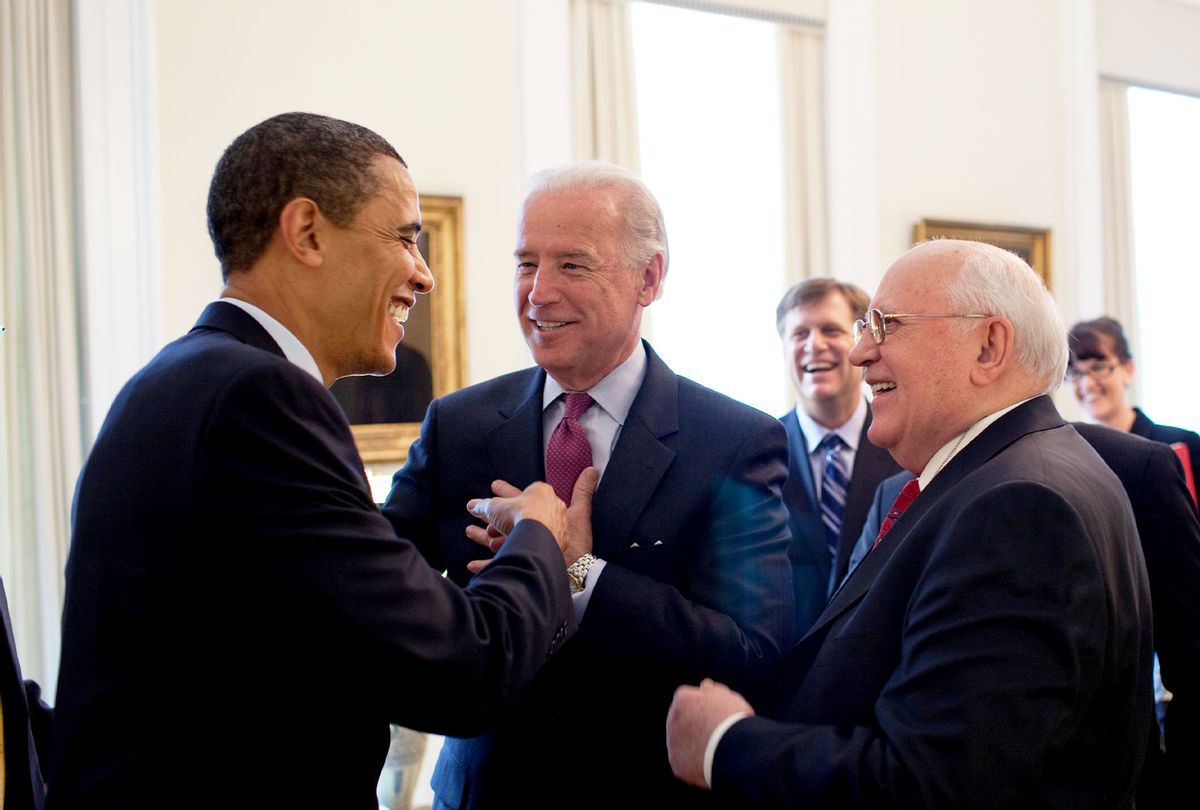 People all over this pandemic-infested, war-torn and poverty-stricken world were shocked by the brutality and racism of Donald Trump's administration, and now anxiously wonder whether Joe Biden's presidency will open the door to the kind of international cooperation that we need to confront the serious problems facing humanity in this century.

For progressives everywhere, the knowledge that "another world is possible" has sustained us through decades of greed, extreme inequality and war, as U.S.-led neoliberalism has repackaged and force-fed 19th-century laissez-faire capitalism to the people of the 21st century. The Trump experience has revealed, in stark relief, where these policies can lead.

Joe Biden has certainly paid his dues to and reaped rewards from the same corrupt political and economic system as Trump, as the latter delightedly trumpeted in every stump speech. But Biden must understand that the young voters who turned out in unprecedented numbers to put him in the White House have lived their whole lives under this neoliberal system, and did not vote for "more of the same." Nor do they naively think that deeply-rooted problems of American society like racism, militarism and corrupt corporate politics began with Trump.

During his election campaign, Biden has relied on foreign policy advisers from past administrations, particularly the Obama administration, and seems to be considering some of them for top cabinet posts. For the most part, they are members of the "Washington blob" who represent a dangerous continuity with past policies rooted in militarism and other abuses of power.

These include interventions in Libya and Syria, support for the Saudi war in Yemen, drone warfare, indefinite detention without trial at Guantánamo, prosecutions of whistleblowers and whitewashing torture. Some of these people have also cashed in on their government contacts to make hefty salaries in consulting firms and other private sector ventures that feed off government contracts.

As former deputy secretary of state and deputy national security adviser to Obama, Tony Blinken played a leading role in all Obama's aggressive policies. Then he co-founded WestExec Advisors to profit from negotiating contracts between corporations and the Pentagon, including one for Google to develop artificial intelligence technology for drone targeting, which was only stopped by a rebellion among outraged Google employees.

Since the Clinton administration, Michèle Flournoy has been a principal architect of the U.S.'s illegal, imperialist doctrine of global war and military occupation. As Obama's undersecretary of defense for policy, she helped to engineer his escalation of the war in Afghanistan and interventions in Libya and Syria. Between jobs at the Pentagon, she has worked the infamous revolving door to consult for firms seeking Pentagon contracts, to co-found the military-industrial think tank called the Center for a New American Security (CNAS), and now to join Tony Blinken at WestExec Advisors.

Nicholas Burns was U.S. ambassador to NATO during the U.S. invasions of Afghanistan and Iraq. Since 2008, he has worked for former Defense Secretary William Cohen's lobbying firm The Cohen Group, which is a major global lobbyist for the U.S. arms industry. Burns is a hawk on Russia and China and has condemned NSA whistleblower Edward Snowden as a "traitor."

As a legal adviser to Obama and the State Department and then as deputy CIA director and deputy national security adviser, Avril Haines provided legal cover and worked closely with Obama and CIA Director John Brennan on Obama's tenfold expansion of drone killings.

Samantha Power served under Obama as UN ambassador and human rights director at the National Security Council. She supported U.S. interventions in Libya and Syria, as well as the Saudi-led war on Yemen. And despite her human rights portfolio, she never spoke out against Israeli attacks on Gaza that happened under her tenure or Obama's dramatic use of drones that left hundreds of civilians dead.

As UN ambassador in Obama's first term, Susan Rice obtained UN cover for his disastrous intervention in Libya. As national security adviser in Obama's second term, Rice also defended Israel's savage bombardment of Gaza in 2014, bragged about the U.S.' "crippling sanctions" on Iran and North Korea, and supported an aggressive stance toward Russia and China.

A foreign policy team led by such individuals will only perpetuate the endless wars, Pentagon overreach and CIA-misled chaos that we — and the world — have endured for the past two decades of the War on Terror.

The alternative: Making diplomacy "the premier tool of our global engagement"

Biden will take office amid some of the greatest challenges the human race has ever faced — from extreme inequality, debt and poverty caused by neoliberalism, to intractable wars and the existential danger of nuclear war, to the climate crisis, mass extinction and the COVID-19 pandemic.

These problems won't be solved by the same people, and the same mindsets, that got us into these predicaments. When it comes to foreign policy, there is a desperate need for personnel and policies rooted in an understanding that the greatest dangers we face are problems that affect the whole world, and that they can only be solved by genuine international collaboration, not by conflict or coercion.

During the campaign, Joe Biden's website declared, "As president, Biden will elevate diplomacy as the premier tool of our global engagement. He will rebuild a modern, agile U.S. Department of State — investing in and re-empowering the finest diplomatic corps in the world and leveraging the full talent and richness of America's diversity."

This implies that Biden's foreign policy must be managed primarily by the State Department, not the Pentagon. The Cold War and American post-Cold War triumphalism led to a reversal of these roles, with the Pentagon and CIA taking the lead and the State Department trailing behind them (with only 5% of their budget), trying to clean up the mess and restore a veneer of order to countries destroyed by American bombs or destabilized by U.S. sanctions, coups and death squads.

In the Trump era, Secretary of State Mike Pompeo has reduced the State Department to little more than a sales team for the military-industrial complex to ink lucrative arms deals with India, Taiwan, Saudi Arabia, the United Arab Emirates and other countries around the world.

What we need is a foreign policy led by a State Department that resolves differences with our neighbors through diplomacy and negotiations, as international law in fact requires, and a Department of Defense that defends the United States and deters international aggression against us, instead of threatening and committing aggression against our neighbors around the world.

As the saying goes, "personnel is policy," so whomever Biden picks for top foreign policy posts will be key in shaping its direction. While our personal preferences would be to put top foreign policy positions in the hands of people who have spent their lives actively pursuing peace and opposing U.S. military aggression, that's just not in the cards with this middle-of-the-road Biden administration.

But there are appointments Biden could make to give his foreign policy the emphasis on diplomacy and negotiation that he says he wants. These are American diplomats who have successfully negotiated important international agreements, warned U.S. leaders of the dangers of aggressive militarism and developed valuable expertise in critical areas like arms control.

William Burns was deputy secretary of state under Obama, the No. 2 position at the State Department, and he is now the director of the Carnegie Endowment for International Peace. As undersecretary for Near Eastern affairs in 2002, Burns gave Secretary of State Colin Powell a prescient and detailed but unheeded warning that the invasion of Iraq could "unravel" and create a "perfect storm" for American interests. Burns also served as U.S. ambassador to Jordan and then Russia.

Wendy Sherman was Obama's undersecretary of state for political affairs, the No. 4 position at the State Department, and was briefly acting deputy secretary of state after Burns retired. Sherman was the lead negotiator for both the 1994 Framework Agreement with North Korea and the negotiations with Iran that led to the Iran nuclear agreement in 2015. This is surely the kind of experience Biden needs in senior positions if he is serious about reinvigorating American diplomacy.

Tom Countryman is currently chair of the Arms Control Association. In the Obama administration, Countryman served as undersecretary of state for international security affairs, assistant secretary of state for international security and nonproliferation, and principal deputy assistant secretary for political-military affairs. He also served at U.S. embassies in Belgrade, Cairo, Rome and Athens, and as foreign policy adviser to the commandant of the U.S. Marine Corps. Countryman's expertise could be critical in reducing or even removing the danger of nuclear war. It would also please the progressive wing of the Democratic Party, since Countryman supported Sen. Bernie Sanders for president.

In addition to these professional diplomats, there are also members of Congress who have expertise in foreign policy and could play important roles in a Biden foreign policy team. One is Rep. Ro Khanna, D-Calif., who has been a champion of ending U.S. support for the war in Yemen, resolving the conflict with North Korea and reclaiming Congress' constitutional authority over the use of military force.

Another is Rep. Karen Bass, D-Calif., who is chair of the Congressional Black Caucus and also of the Foreign Affairs Subcommittee on Africa, Global Health, Human Rights, and International Organizations.

If the Republicans hold their majority in the Senate, it will be harder to get appointments confirmed than it may be if Democrats win the two Georgia seats that are headed for runoffs — or than it might have been had they run more progressive campaigns in Iowa, Maine or North Carolina and won at least one of those seats. But this will be a long two years if we let Joe Biden take cover behind Mitch McConnell on critical appointments, policies and legislation. Biden's initial cabinet appointments will be an early test of whether our new president will be the consummate insider or whether he is willing to fight for real solutions to our country's most serious problems.

U.S. cabinet positions are positions of power that can drastically affect the lives of millions of Americans and billions of our neighbors overseas. If Biden is surrounded by people who, against all the evidence of past decades, still believe in the illegal threat and use of military force as key foundations of American foreign policy, then the international cooperation the whole world so desperately needs will be undermined by four more years of war, hostility and international tensions, and our most serious problems will remain unresolved.

That's why we must vigorously advocate for a team that would put an end to the normalization of war and make diplomatic engagement in the pursuit of international peace and cooperation our No. 1 foreign policy priority.

Whomever President-elect Biden chooses to be part of his foreign policy team, he — and they — will be pushed by people beyond the White House fence who are calling for demilitarization, including cuts in military spending, and for reinvestment in our country's peaceful economic development.

It will be our job to hold Biden and his team accountable whenever they fail to turn the page on war and militarism, and to keep pushing them to build friendly relations with all our neighbors on this small planet that we share.