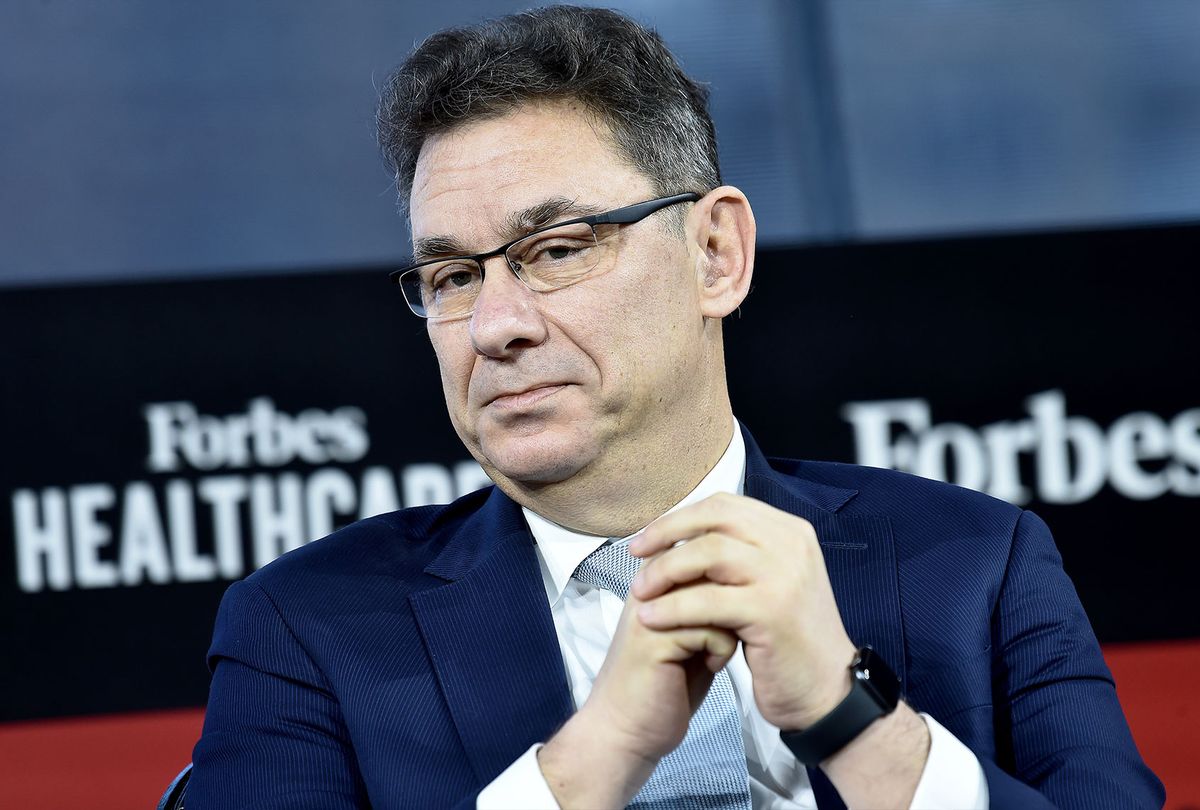 A watchdog group called for the Securities and Exchange Commission to investigate stock sales by Pfizer chief executive Dr. Albert Bourla on the day the pharmaceutical giant announced that its coronavirus vaccine was more than 90% effective.

In a press release on Monday that made worldwide headlines, Pfizer claimed that study data indicates that the company's experimental coronavirus vaccine is highly effective at preventing infection. Scientists warned that data from Pfizer's clinical trial and specific details on the vaccine were not yet available. But President Trump and others touted the report, which lifted the company's stock price by nearly 8%.

Bourla unloaded 132,506 shares of Pfizer stock at $41.94, near the company's peak, for a total of nearly $5.6 million on the same day, SEC filings show. The transaction appeared to be Bourla's first public sale of stock since 2016, though he has made non-market transactions, according to federal filings.

The stock sale raised questions after Bourla told CNN's Sanjay Gupta that he learned of the positive trial results a day before they were publicly announced.

Amy Rose, the company's vice president of global media relations, told Salon that the sale was prearranged through an SEC-compliant trading plan in August.

"The sale of these shares is part of Dr. Bourla's personal financial planning and a pre-established (10b5-1) plan, which allows, under SEC rules, major shareholders and insiders of exchange-listed corporations to trade a predetermined number of shares at a predetermined time," Rose said in an email. "Through our stock plan administrator, Dr. Bourla authorized the sale of these shares in February and renewed that authorization in August with the same price and volume terms. After being with the company for more than 25 years, Albert owns a substantial amount of Pfizer stock under our qualified and nonqualified savings plans. He now holds approximately nine times his salary in Pfizer stock after the sale this week."

Sally Susman, the company's executive vice president, also sold 43,662 shares for a total value of around $1.83 million under a pre-arranged plan, according to filings.

The company did not respond to questions about the impression conveyed to regulators or the public by these sales, or about whether it would freeze future stock sales by executives.

The prearranged plans are a common way to "shield corporate executives from allegations of illegal insider trading" but they have also become "increasingly controversial" given the "billions of dollars the government has promised Pfizer if its vaccine meets the approval of federal regulators," NPR reported.

While such plans are intended only to be used when executives are not "in possession of inside information" that could affect a company's stock price, the timing of Bourla's plan raised questions because it was implemented on Aug. 19, a day before Pfizer announced that it was "on track to seek regulatory review" by October, NPR added.

Daniel Taylor, an insider trading expert at the Wharton School of the University of Pennsylvania, told NPR that the timing of the stock plan appeared "very suspicious."

"It's wholly inappropriate for executives at pharmaceutical companies to be implementing or modifying 10b5-1 plans the business day before they announce data or results from drug trials," he said.

A spokesperson for the company told NPR that it did not believe the Aug. 20 announcement had any material nonpublic information, adding that the company previously announced its plan to seek approval by October and was merely confirming the timeline.

Accountable Pharma, a progressive watchdog group, has called for Pfizer and other pharmaceutical companies to freeze the sale of stocks by executives "to prevent the kind of insider profiteering off of positive news that we've seen across the industry over the last few months."

Eli Zupnick, a spokesman for the group, on Thursday called on the SEC to investigate the Pfizer sales.

"This appears to be another example of a shameless pump-and-dump and egregious pandemic profiteering that, if nothing else, is a terrible look for a drug industry that is desperately trying to rehabilitate its image," he said in a statement to Salon. "We called on Pfizer to freeze all insider sales for exactly this reason, and now we're calling on the SEC to investigate these trades to determine if these executives' trading plans were inappropriately adjusted or if their options were exercised based on inside information."

Zupnick added in a press release that Pfizer "should immediately release their study data for full independent review."

"Given the billions of guaranteed taxpayer dollars that supported and incentivized the development of this vaccine, Pfizer must now explain how much they intend to profiteer off of this vaccine and what they intend to charge patients and the federal government beyond the initial doses," he said.

Other pharmaceutical companies receiving funding from taxpayers have also come under fire for their executives' stock trades. Executives at the pharmaceutical giant Moderna have sold off tens of millions in stock ahead of announcements about its vaccine development while receiving large contracts from the Trump administration.

"It's troubling to me that the general counsel or the internal controls of these companies would consider it legitimate to adopt a 10b5-1 plan one day before a major vaccine announcement," Taylor told NPR. "If this isn't a wake-up call for the SEC and a wake-up call that we need to reform these 10b5-1 plans, I don't know what it is."

SEC Chairman Jay Clayton warned back in May that pharmaceutical firms should avoid these types of stock sales.

"We've said for a long time: In this volatile time, please practice good corporate hygiene," he told CNBC. "Why would you want to even raise the question that you were doing something that was inappropriate?"