Understanding the Trump voters: Here's why nobody is doing it right

I've been an evangelical pastor and a teacher in an immigrant community. I'm not shocked Trump did better this time 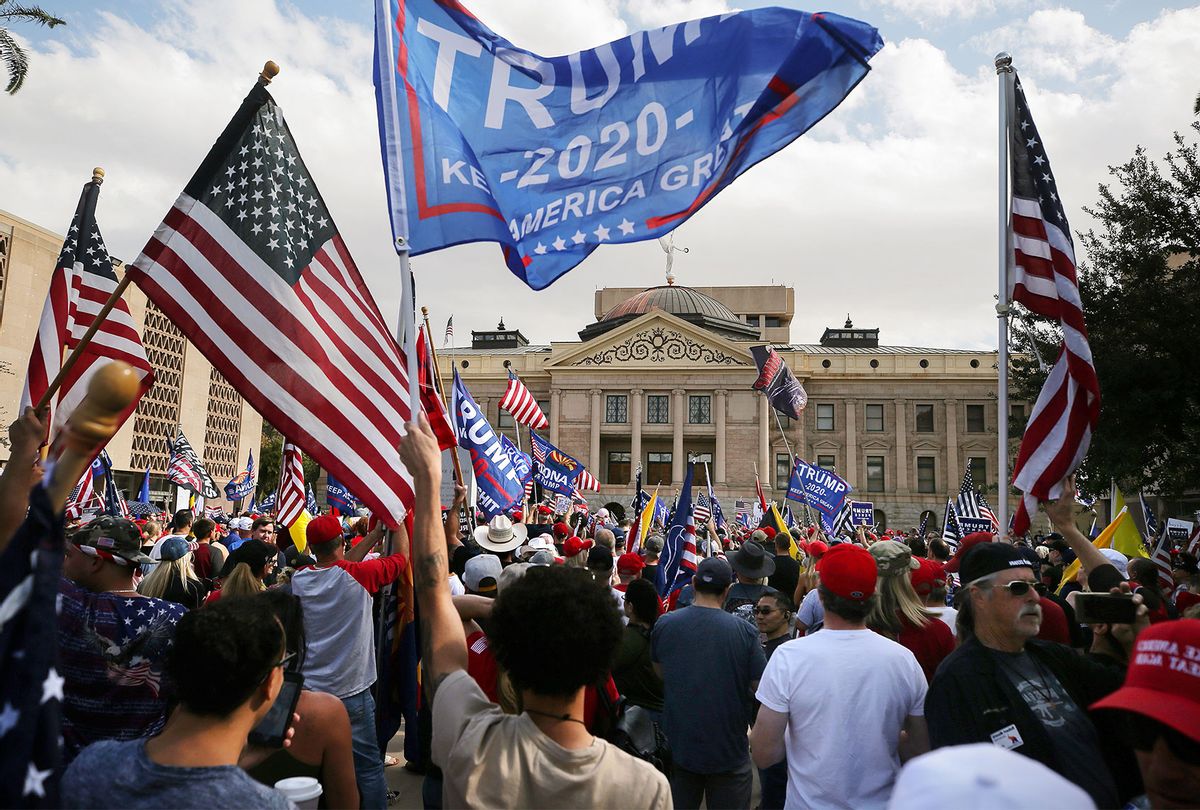 Supporters of President Donald Trump demonstrate at a ‘Stop the Steal’ rally in front of the State Capitol on November 7, 2020 in Phoenix, Arizona. News outlets project that Joe Biden will be the 46th president of the United States after a victory in Pennsylvania with Kamala Harris to be the first woman and person of color to be elected Vice President. (Mario Tama/Getty Images)
--

Based on the last two presidential elections, there is clearly a failure in reporting, polling and understanding of almost half of America. Perhaps liberals would simply like to govern and run for office by only mobilizing their half of the population and overlooking that other half, but I would imagine this country won't get closer to equal opportunity with that type of thinking. It's true that much of the divisive language comes from Trump supporters who seems to enjoy Trump's deplorable approach to life and politics. Does that embody every single person who voted for Donald Trump in the last two elections? If you think that, then you are as lost as the narrow reporting and polling I have witnessed during the last four years.

My life has brought me across the lives of many other people, which has allowed me to understand the viewpoints of both sides in a more personal and complicated way. I'm a former pastor, and my favorite family in one of my churches was one that actually attended a Glenn Beck rally. Do you realize how kooky you need to be to travel from Massachusetts to Washington, D.C., to attend a Glenn Beck rally as a family? Yet I have nothing but warm feelings for them: Best family in the church by far. They were close to each other, kind and down to earth — and as far from me politically as anyone I have ever met. My least favorite family was full of hate, judgment and self-righteousness — yet I agreed with them on every single political issue. In fact, that liberal family is the sole reason I left formal ministry.

As a high school teacher in a predominantly first-generation and low-income Latino community, I noticed something very interesting. First, my fellow teachers, who were naturally very educated, very liberal and quite talented teachers, and usually came from serious financial privilege, barely survived the Trump presidency emotionally. In real life their lives didn't change a bit. They still went to Europe during the summer, went out to eat all weekend, shopped at Whole Foods and lived in the heart of expensive liberal-bastion neighborhoods like Cambridge and Somerville. In fact, I bet their financial lives improved during the Trump presidency, or at least their parents' lives did.

Meanwhile, the students whose lives were actually affected by Trump winning in 2016 acted like it was nothing. The reason for this reaction was not political ignorance but real-life understanding. Many liberals suffering from what they call "implicit bias" — or, as I call it, racism — claimed that these poor, uneducated immigrants simply didn't know what had just happened. The truth is that the community members knew exactly what had happened: Nothing. Their city has had a bad school system for the last 40 years and it will continue down that path no matter who is president. Their city has gangs, dilapidated housing and crime everywhere, just as it did over the last 40 years. Trump as president just affirmed what they always suspected about this country: It doesn't care about their community. Except when, over the next 20 years, the poor Latino community is forced out by gentrification, which has already started.

Now comes my own failure, and the failure of the people with labels just like me. I am a Bible-believing Christian minister, I am blue collar, and I have been a committed member of the working-class poor most of my life. Many of my people support Trump and will continue in four years to support the next Trump type if the Democratic Party doesn't start changing its approach. By the way, the Trump type is here to stay. Trump brought in more votes than any other Republican ever — the Republicans aren't just going to wash their hands of him now. That's just a pipe dream of the left. The true path to defeating Trumpism forever lies within the blue-collar, working-class poor of this country.

If I had any political network besides a bunch of package handlers at FedEx I would start a new political party called the Blue Collar Party, the leaders of which would only be front-line workers around this great country. The laborers, the line workers, the waitresses, the janitors, the shovel holders and anyone else suffering from holding up this country. These people understand this country more than any reporter, politician or entertainer with a voice and a big salary ever could. The best part of that blue-collar fight is that it empowers all races, since class doesn't have a color. Naturally enough, providing upward mobility to the working-class poor will predominantly bring hope to many people of color and will potentially show a new sense of unity that could break down some of the barriers between races.

I have worked side by side with the working-class poor who love Trump, and I promise you there is hope in reaching them. Hell, Obama reached them a little, and Bernie Sanders did more so. Even Bill Clinton did, but for the most part they feel forgotten by the Democratic Party. In spite of all this, the liberal media simply wants to explain away half the country as racist, sexist and ignorant voters. God forbid the vote they gave for Trump had a genuine purpose. I admit it may have been a flawed purpose but it's one that needs to be addressed before the country completely loses sight of itself.

On my own end, I would love to reach out to my fellow evangelical followers to re-educate them on the Bible and what it truly means to follow Christ. The evangelical leaders are lost and beyond my help, but the followers are not. The Bible commands its followers to champion liberal causes and certainly not the two non-biblical issues that have been forced onto the public over the last 40-plus years. The issues around welcoming the foreigner, healing the sick, equality for all and supporting the causes of the least of these needs to be the new foundation of the public voice of the church.

I feel there are a great number of people in the country that simply feel unseen, and in desperation they reach out to anyone who even appears to care about them. I know it is easier to put people we disagree with into various categories. I do it all the time. It saves a lot of time and energy. However, as a minister I know I need to hold myself to a higher standard. I also know what I have seen and the people I have met in my life. People are complicated. In fact I barely understand myself half the time. At age 43, I hiked across Spain hoping to "find myself" on my own Camino de Santiago. I didn't find myself in Spain but it was certainly enlightening. I know my own personal journey is complicated and the same can be said about the millions of people living their lives across this Country. People are looking for a sense of belonging, looking to be heard, looking for professional and educational opportunity, looking to feel valued and loved. I can only hope that in the next few years this country will start to understand itself just a little bit more than it does now.

Nathaniel Manderson was educated at a conservative seminary, trained as a minister, ordained through the American Baptist Churches USA and guided by liberal ideals. Throughout his career he has been a pastor, a career counselor, an academic adviser, a high school teacher and an advocate for first-generation and low-income students, along with being a paper delivery man, a construction worker, a FedEx package handler and whatever else he could do to try to take care of his family.