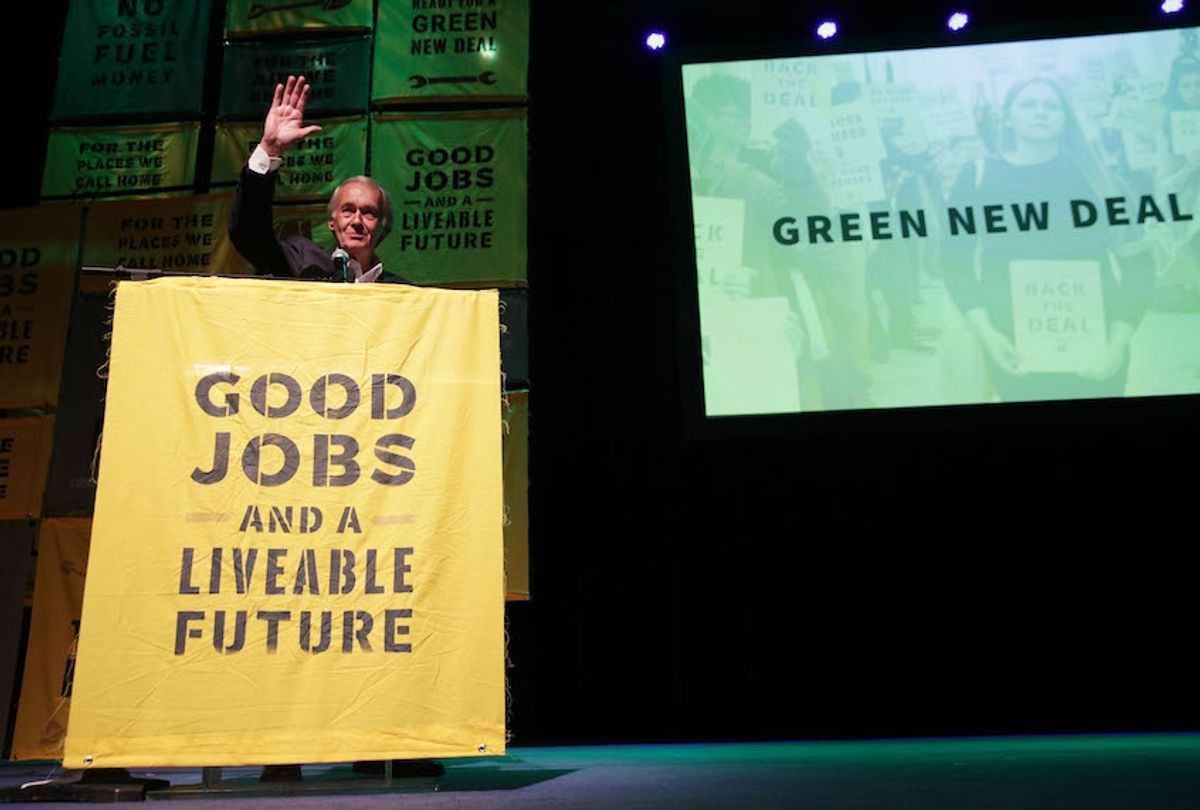 U.S. Sen. Edward Markey (D-MA) speaks during a rally at Howard University May 13, 2019 in Washington, DC. The Sunrise Movement held an event for the final stop of the "Road to a Green New Deal" tour to "explore what the pain of the climate crisis looks like in D.C. and for the country and what the promise of the Green New Deal means." (Photo by Alex Wong/Getty Images) (Photo by Alex Wong/Getty Images)
--

On Saturday, Joe Biden declared victory over Donald Trump in the 2020 presidential election, and youth climate activists rejoiced. Though President-elect Biden wasn't the top choice for many of them, his victory opens the door for climate action that's been unthinkable under the Trump administration. And Biden has shown himself to be responsive to youth climate activism, updating his climate platform over the summer to embrace a more aggressive and expensive approach to climate action. "I want young climate activists, young people everywhere, to know: I see you. I hear you," he said at a virtual fundraiser in July. "I understand the urgency, and together we can get this done."

But Biden will have to navigate a treacherous path in order to accomplish the kind of comprehensive climate action he campaigned on. The Senate, a branch of government whose cooperation Biden will need to pass major climate legislation, is likely to remain in Republican control. (Two runoff elections in Georgia could change the game, but they're both long shots.)

Young climate activists say they're not deterred by the congressional layout. Two youth climate groups Grist spoke to — one on the left, one on the right — say Operation Make the U.S. a Climate Leader is powering full steam ahead.

The Sunrise Movement, a youth-led climate activist network that rose to climate-world fame after a sit-in in House Speaker Nancy Pelosi's office two years ago, has a track record of taking the Democratic establishment to task. It plans to do more of the same for the foreseeable future.

"We would rather be friendly than be aggressive right now, but we are ready to mobilize to back this agenda," Garrett Blad, a member of the Sunrise national press team, said, noting that the group is willing to support Biden however it can if he makes climate action a priority. "We're going to focus on pushing Biden to do everything that he can do through executive orders and through the executive office."

The group will put pressure on Biden to establish a White House office of climate mobilization that would be tasked with coordinating and aligning various agencies across the federal government in the service of implementing the parts of Biden's Build Back Better plan that don't need congressional approval. (Biden is reportedly already considering creating such an office.) It will also closely watch who the president-elect appoints to key cabinet and agency positions.

Sunrise expects Biden to wrap some of his climate plan into a stimulus bill — which they hope will get through the Senate — sometime after he officially takes office. Following that package, the group wants to see the Biden administration champion a second wave of climate-related legislation. Sunrise knows that it's unlikely that a Biden administration will be able to deliver on that with a Republican Senate, Blad said. The idea is to try to get a climate package through the House anyway, and, when it's blocked by McConnell, make a case to voters in 2022. "We're going to push him to make the case to the American people that this is going to make their lives better, and if the GOP under McConnell doesn't want to support that, then let that be clear for the 2022 elections," Blad said.

Sunrise won't shy away from falling back on well-worn tactics to put Biden's feet to the fire. That means large demonstrations, civil disobedience, and other actions from the organization's nearly 500 chapters scattered across the country.

On the other side of the aisle, young Republicans with the conservative environmental group the American Conservation Coalition (ACC) think a Biden presidency paired with a Republican-controlled Senate actually opens up a unique window of opportunity for climate legislation. The split control of Washington will rein in overly eager Democrats and pave the way for climate-curious Republicans in Congress to start coming to the table with ideas, said Quillan Robinson, vice president for government affairs for ACC.

"Frankly, I think that if there had been a blue wave as was predicted, it would actually be kind of counterproductive because Democrats would shoot for the moon and end up falling short," Robinson told Grist. "I don't think doing a huge, massive climate package that includes all of Biden's priorities on climate change is the strategy for success. I think breaking it up into different areas can be really conducive to success."

Robinson is placing his hope in moderate Republicans with a climate record, like Senator Susan Collins of Maine, who prevailed against the Democratic state house speaker, Sara Gideon, on Tuesday. Robinson said centrists like Collins might actually vote for a climate agenda if it's introduced one piece at a time. Some of the moderate Republicans who flipped state houses on Tuesday might do the same at the state level. ACC plans to encourage a step-by-step approach to climate legislation that starts with natural solutions like planting trees, followed by investments in energy innovation like carbon capture and renewable energy infrastructure.

But first, Robinson says, the GOP needs to develop a Republican climate plan. That way, Republicans who decide to come to the bargaining table won't have to arrive empty handed. That might sound like a tall order for a party that has made a habit of denying basic climate science for the past few decades, but Robinson pointed to legislation introduced by Republican moderates like Collins and Senator Lisa Murkowski of Alaska, as well as a raft of bills introduced by Republicans in the House, as proof that the GOP is starting to change its tune on the issue. Once Republicans coalesce around a central plan, "it's just a matter of each side coming to the table and saying, 'Here's our approach and here's where there's overlap in terms of policy priorities,'" Robinson said.

Sunrise activists and ACC activists don't see eye to eye on many things, including the best way to bring down emissions. For example, the name of the game for Sunrise is still the Green New Deal. For ACC, that progressive proposal is a flashy distraction that has the potential, Robinson says, to genuinely harm the advancement of climate policy in the U.S. by alienating moderate members of Congress as well as moderate Americans. But the two groups are, in effect, working on opposite sides of the same coin. It stands to reason that If ACC successfully nudges the Republican establishment to even half-heartedly embrace climate policy and Sunrise succeeds in pressuring the Democratic establishment to take immediate action on the issue, the two sides could be forced to meet somewhere in the middle.

But finding middle ground, even between the two climate groups, will take time and effort to foster. Robinson expressed skepticism that ACC and Sunrise had a common goal. "They're a movement trying to push the center of gravity among Democrats to the left," Robinson said of Sunrise. "What we're going to need is not pushing Biden to the left but establishing what that fertile ground is for real climate policy is in the middle."

Blad is also dubious that Sunrise and ACC are fighting different heads of the same hydra. Within Sunrise, Blad said, "there's a lot of distrust of the GOP, but if people are willing to come on board, we're willing to have it!"